What Is The GoldRush Rally?

For those not in the know, the GoldRush Rally is part Cannonball Run, part One Lap of America and part huge VIP party.  During the day you drive to the next city where a 5 star hotel and VIP party await you. Along the routes there are special driving experiences at race tracks and other unique motoring venues. Although the trips between cities are not timed, when the roads open up there is a fair amount of spirited driving to get your adrenaline pumping.

The GoldRush Rally is a rolling car show of sorts. It is also the most exclusive and popular exotic car rally in the United States. Comparable only to something like the Gumball 3000 in Europe, it is the premier rally of North America. Each year the route changes and fans from all over show up at each destination city to see the amazing group of the hottest sportcars in the most elaborate themes and vinyl wraps that are signature to the GoldRush Rally. 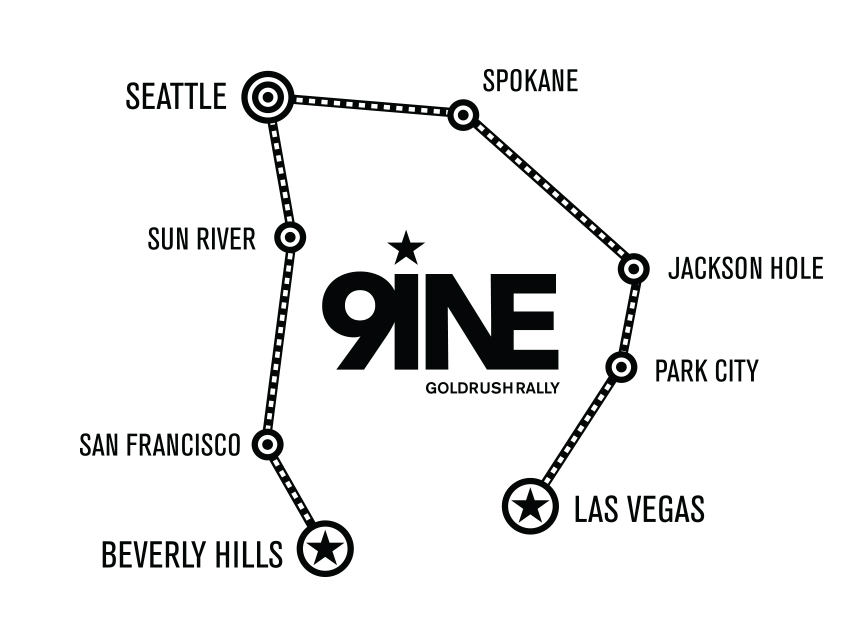 This years GoldRush Rally 9ine marks the 9th year of this incredible gathering of exotics and supercars. GR9ine brought out many new and creative themes as one has come to expect. A gold-chrome Bugatti Veyron was a huge hit and countless others came up with some eye-popping designs. Goin Haam had his green wrapped Lamborghini Aventador covered in graffiti from what looked like an upset wife or girlfriend. Amber Blonigan of GI Automotive had her purple GT3RS covered in green hand drawn artwork. Team Champagne Showers had a chrome rainbow wrapped Ferrari 559. My personal favorite was Ben Chen had his Purblanc Bugatti Veyron Super Sport wrapped as Herbie the Love Bug.

Last year I was in the 1000HP, ALPHA Twin Turbo, Talladega Nights, Ricky Bobby Lamborghini Huracán. My friend Jordan and I dressed up as Ricky Bobby and Cal Naughton Jr. and we stole the show. 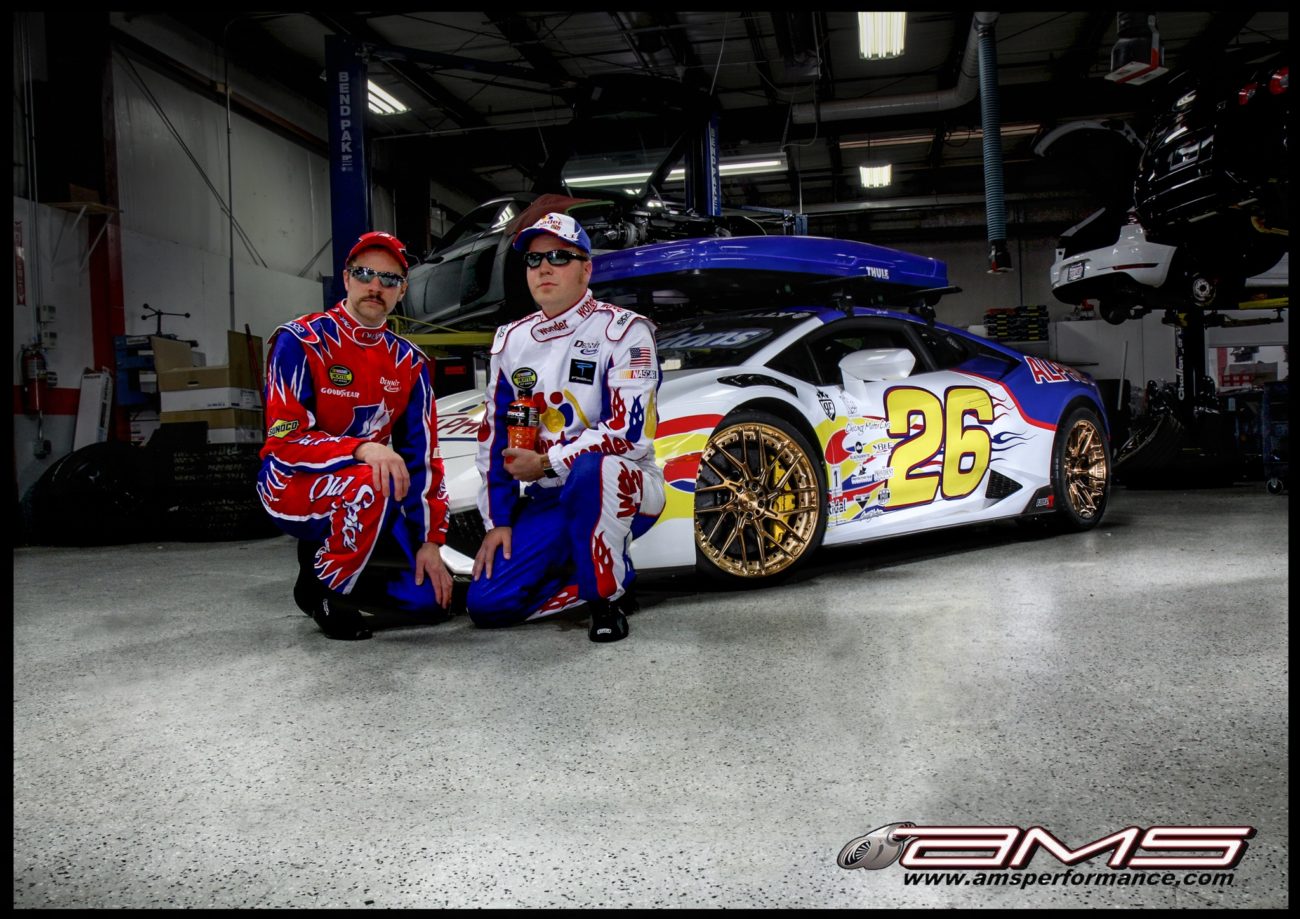 This year however, I was teaming up with Porsche lover Syed Ahmed, owner of Platinum Motor Cars Detroit. At first the plan was to run a 1987 Porsche 930 Slantnose with a RWB widebody kit. Such a dope car to look at but hardly a comfortable car for a road rally. When it looked like that car would not be done in time, we started to think about other cars. That’s when our friend Parin Shah of Chicago Motor Cars mentioned he had picked up a 2015 Porsche GT3 with a Libertywalk widebody kit wearing some deep dish 1221 brand wheels, and it was already located near the start of the rally in San Diego. The car was a perfect fit for the trip with the comfort seats and an extended range 24 gallon factory fuel tank and it was already on the West coast.

For the wrap Syed, being the vintage Porsche fan he is, chose to mimic the theme of Hans Hermann‘s 1970 24 Hours of Lemons winning Porsche 917. Ryan of Protective Film Solutions knocked out a great looking wrap on the car in the short time allotted. 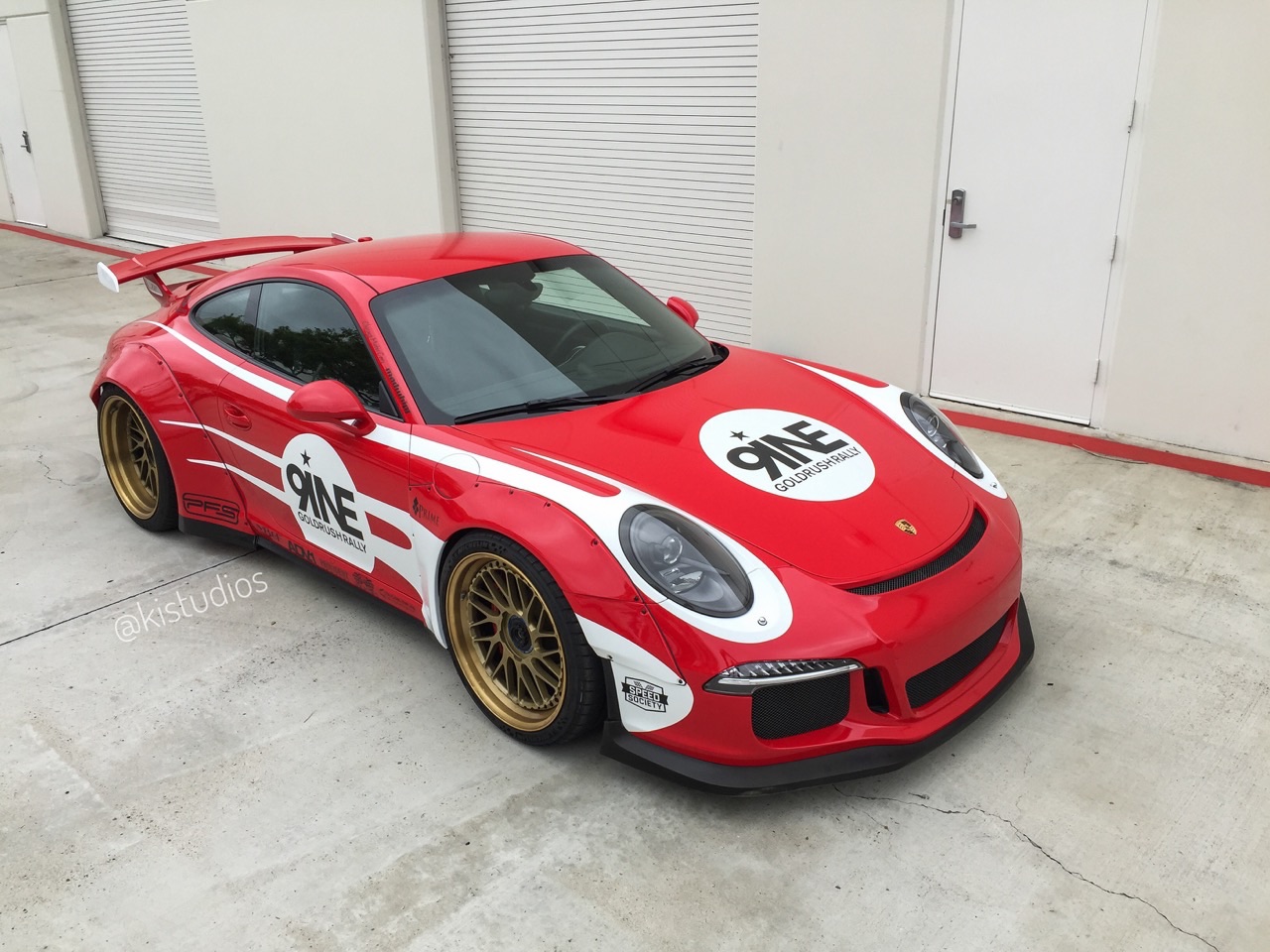 Having the car already in California posed a dilemma for me. My plan had been to outfit whatever car we used with all of my Police countermeasures. The most difficult item to install would be the laser jammer and to me, knowing it is popular for the Police to use in California, was one of the most important items to have. Seeing we were pressed for time, I turned to my friend Victor to rig up a temporary laser jammer I could install in the parking lot of the starting grid. Using an old Blinder M27 jammer I had laying around, he made a great little setup I could install by running the wires through the bonnet, in through the door jam and into the glove box. A little janky I know but you got to do what you got to do.

Just days before the rally started, Syed had to make a change in his plans and was unable to come on the first half of the rally. A little shuffling around of plans and I partnered up with my friend Shaun Patel of Ray’s Electronics for the drive.

Time was ticking away to start of the rally and Syed sent the car to GMG Racing for a quick once over and service. While the car was there, we opted for a GMG Sport exhaust system as well. With only a day to the start things looked like they were going to fall into place. 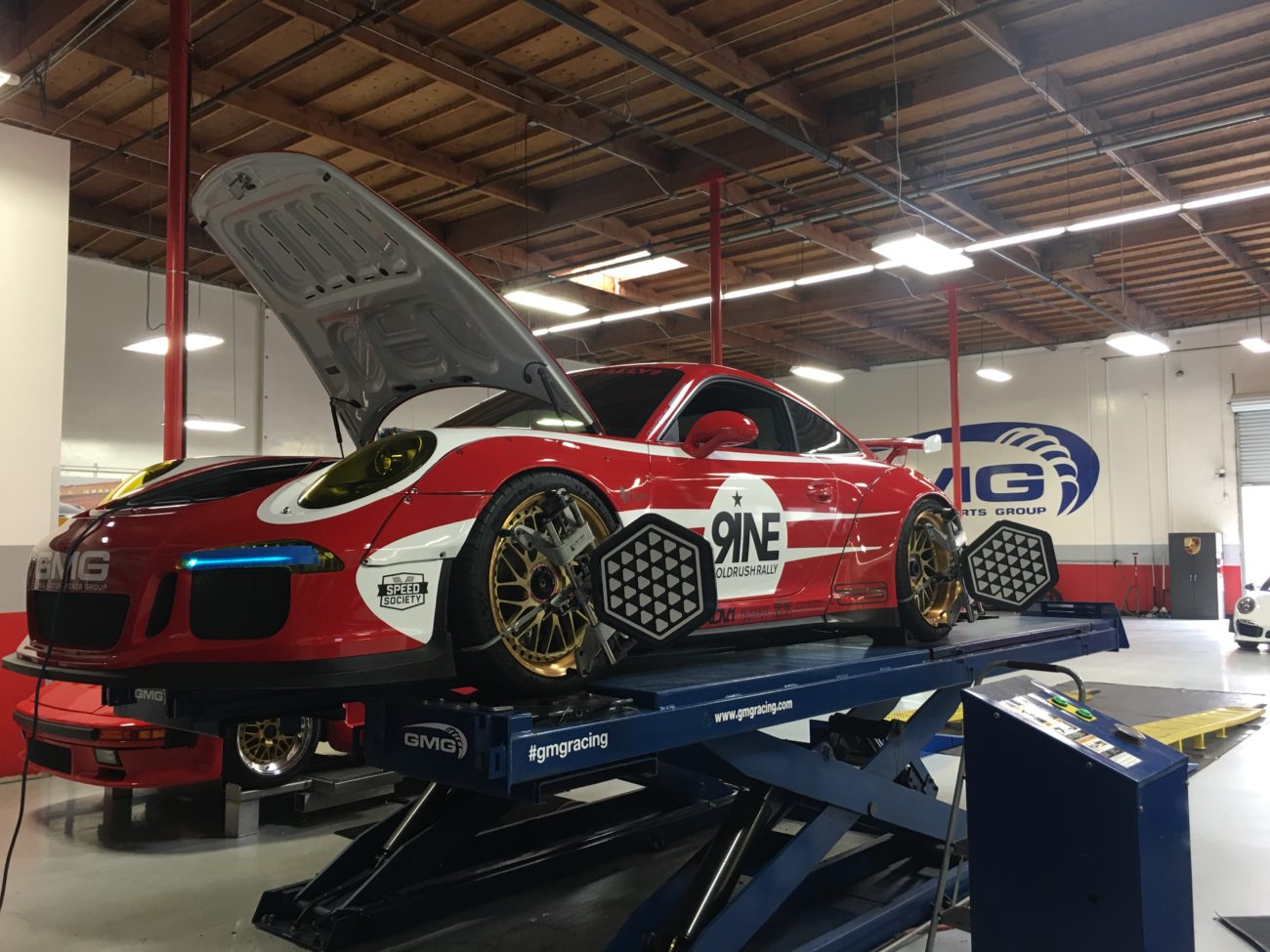 The starting grid of GoldRush Rally 9ine was held at Petersen Auto Museum in Beverly Hills. The plan was to have GMG drive the car out Friday morning to the start where I would meet them right from the airport, get everything installed in the car with plenty of time to spare. Things never go as planned though. As GMG drove the car to deliver it they noticed the alignment was off. They turned around and got the car on their state of the art alignment rack. They quickly diagnosed a couple bad bushings, corrected the ride height of the car and got it aligned in record time. They got back in the car and made a bee-line to the grid.

When the car arrived I quickly got to work installing the Police countermeasures which included:

With only minutes to spare I had the car done and we caught the last shuttle back to the Beverly Hills Four Seasons Hotel. 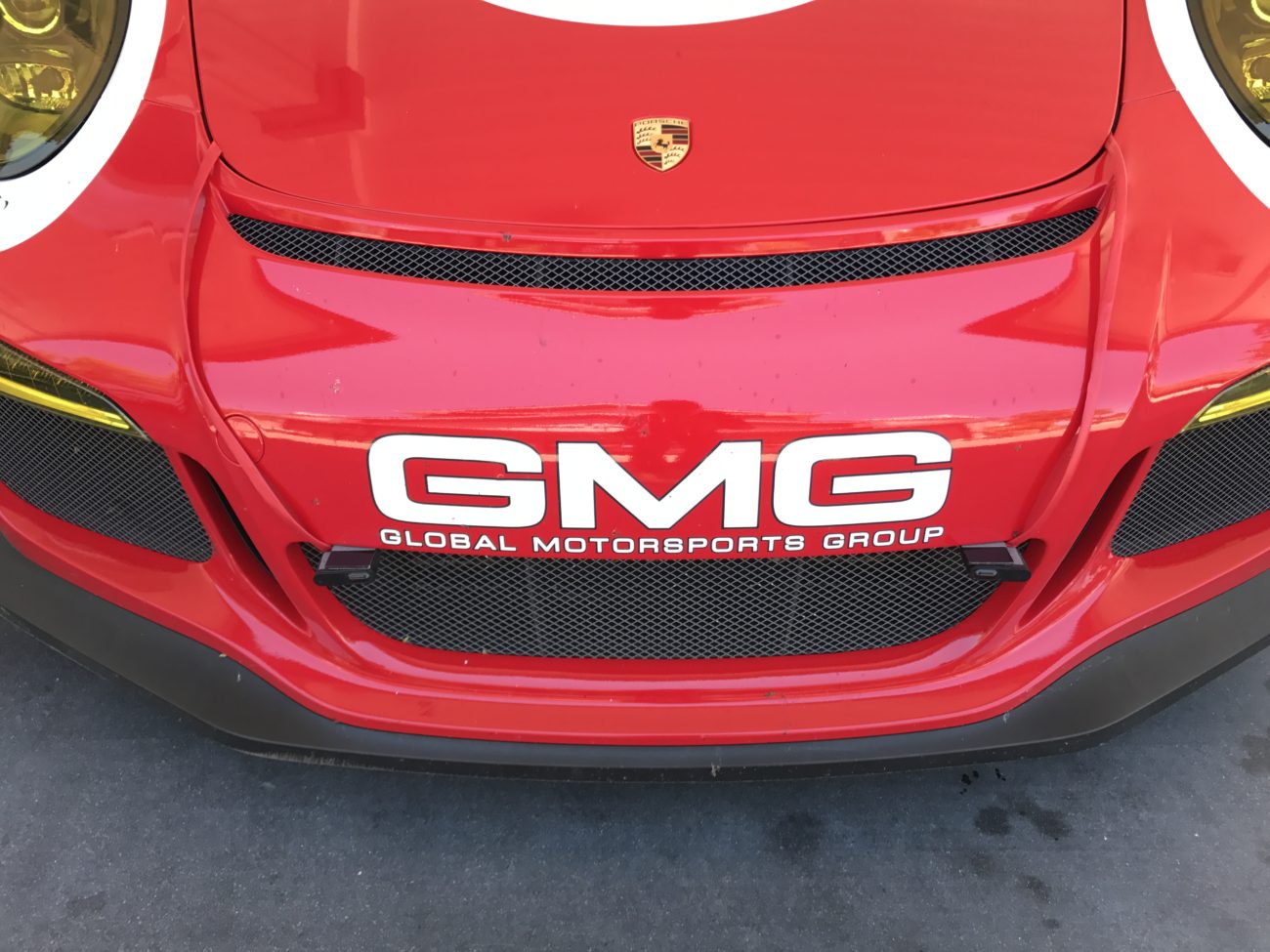 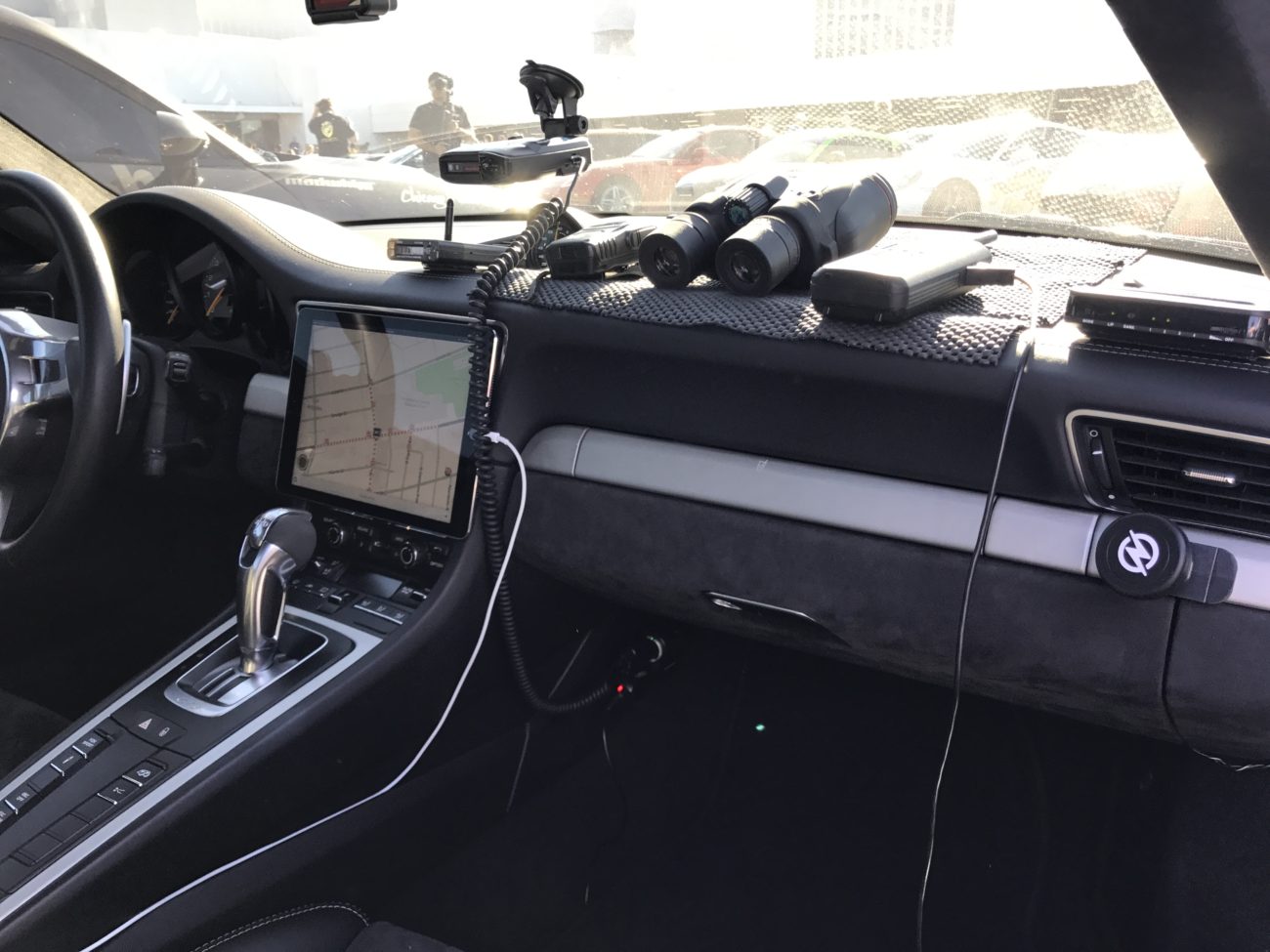 The cockpit of the Libertywalk GT3 – Cannonballer tools of the trade

The Start of GoldRush Rally 9ine!

The GoldRush Rally 9ine starting grid at the Petersen Auto Museum was amazing as usual. The energy at the drivers meeting was intense and the line-up of amazing vehicles was one for the record books! 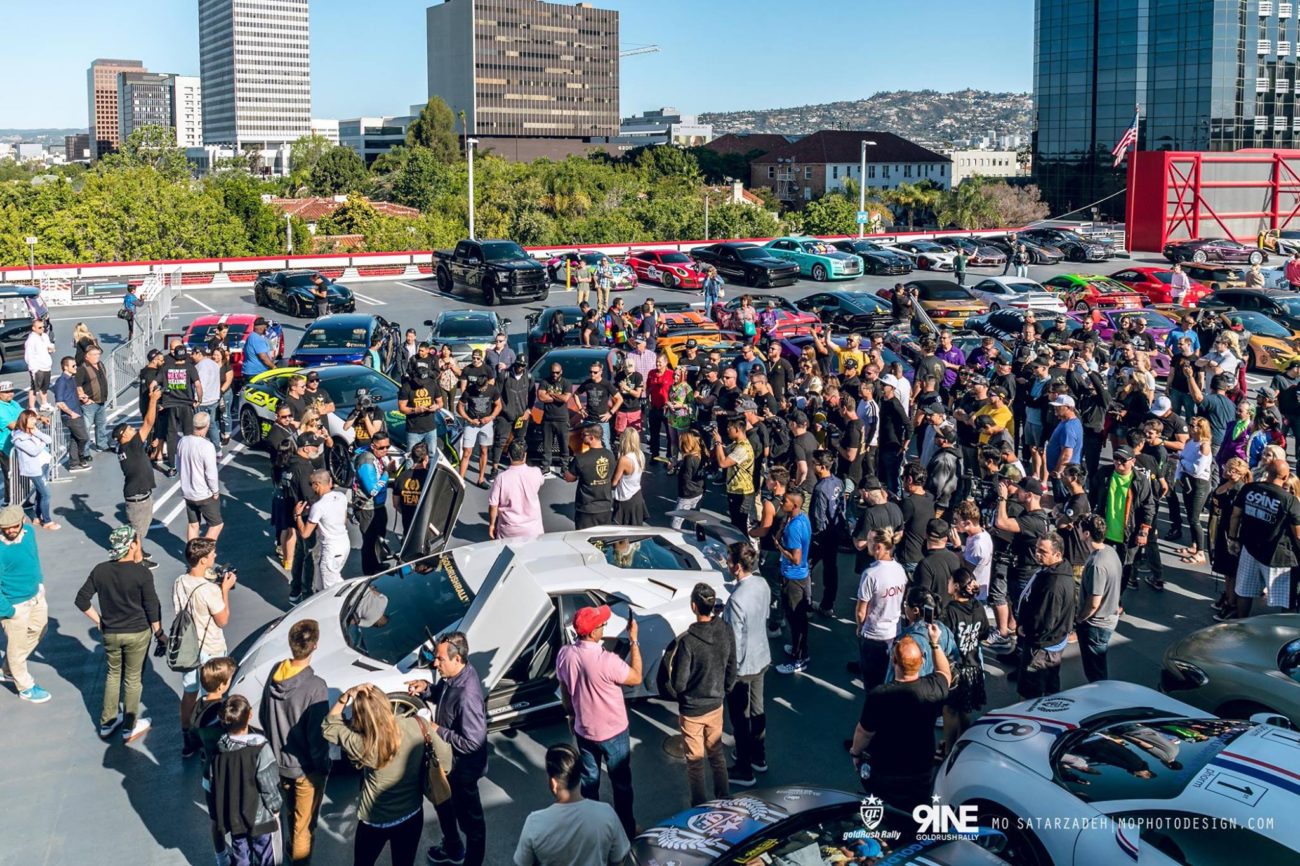 Leaving the Petersen Auto Museum in Beverly Hills with a Police escort to the highway, we set off for the Hearst Castle on Highway 101, with a final destination of San Francisco. Once we got to the on ramp we sped off North heading to the 101. It didn’t take long for the first cars to stir the hornets nest as we made our way up North on the 101.

A couple hours in the CHP began stationing cars and motorcycles along the highway and were coming along side our cars instructing us to pull over at the next gas station. When we got to the gas station we met up with probably 30 other GoldRushers who were already there. After a stern talking to from the CHP, they relaxed a bit and wanted to know more about the cars which is pretty typical as us GoldRushers, with our outlandish cars, have a way of diffusing the Police with respect and a bit of humor. They let us all go with a warning to slow down. 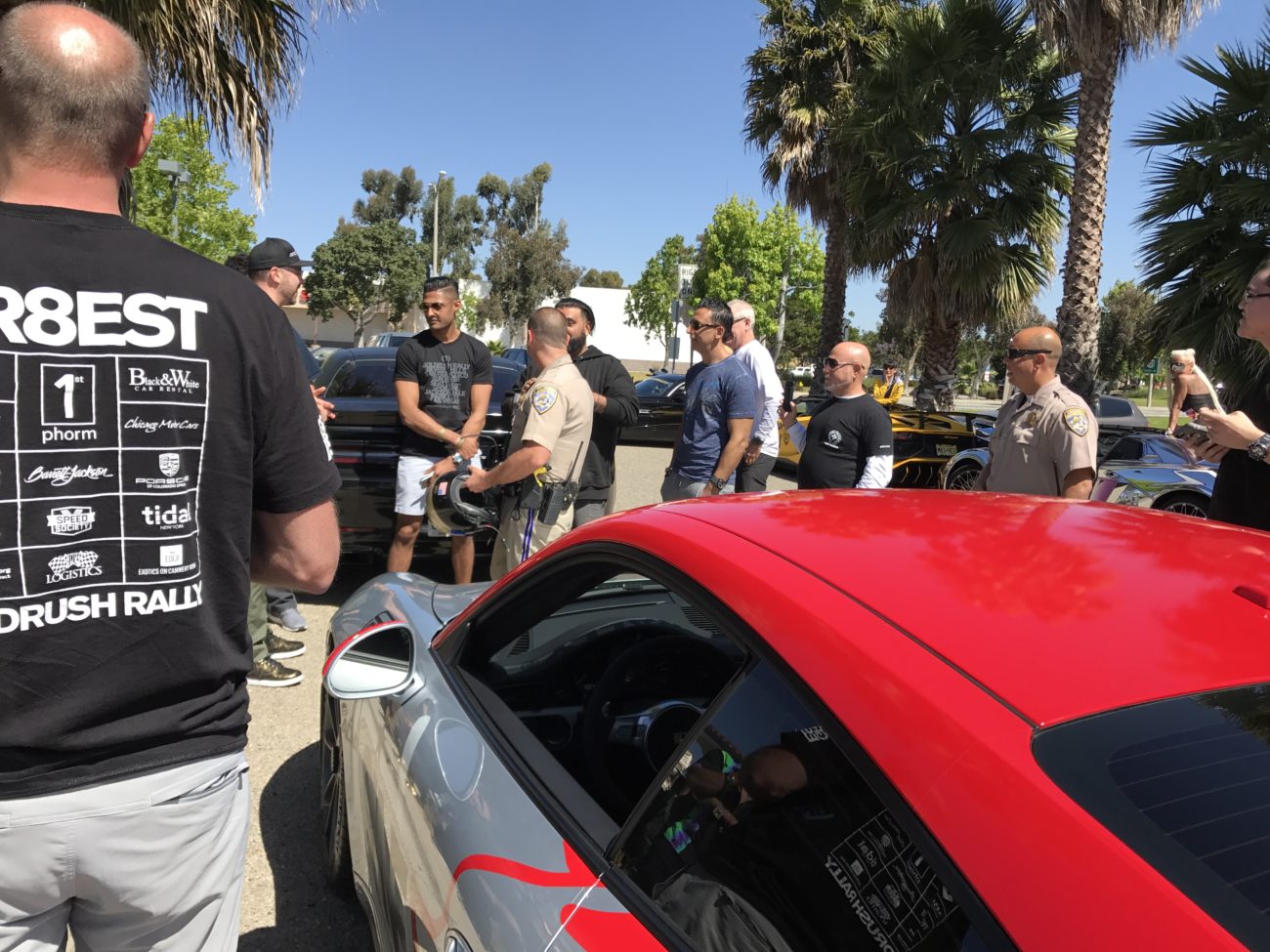 Impromptu “driver’s meeting” with the CHP

After our encounter with the California Highway Patrol, we made our way to the coast and Highway 1. We enjoyed an amazing view as we headed to the Hearst Castle for lunch. 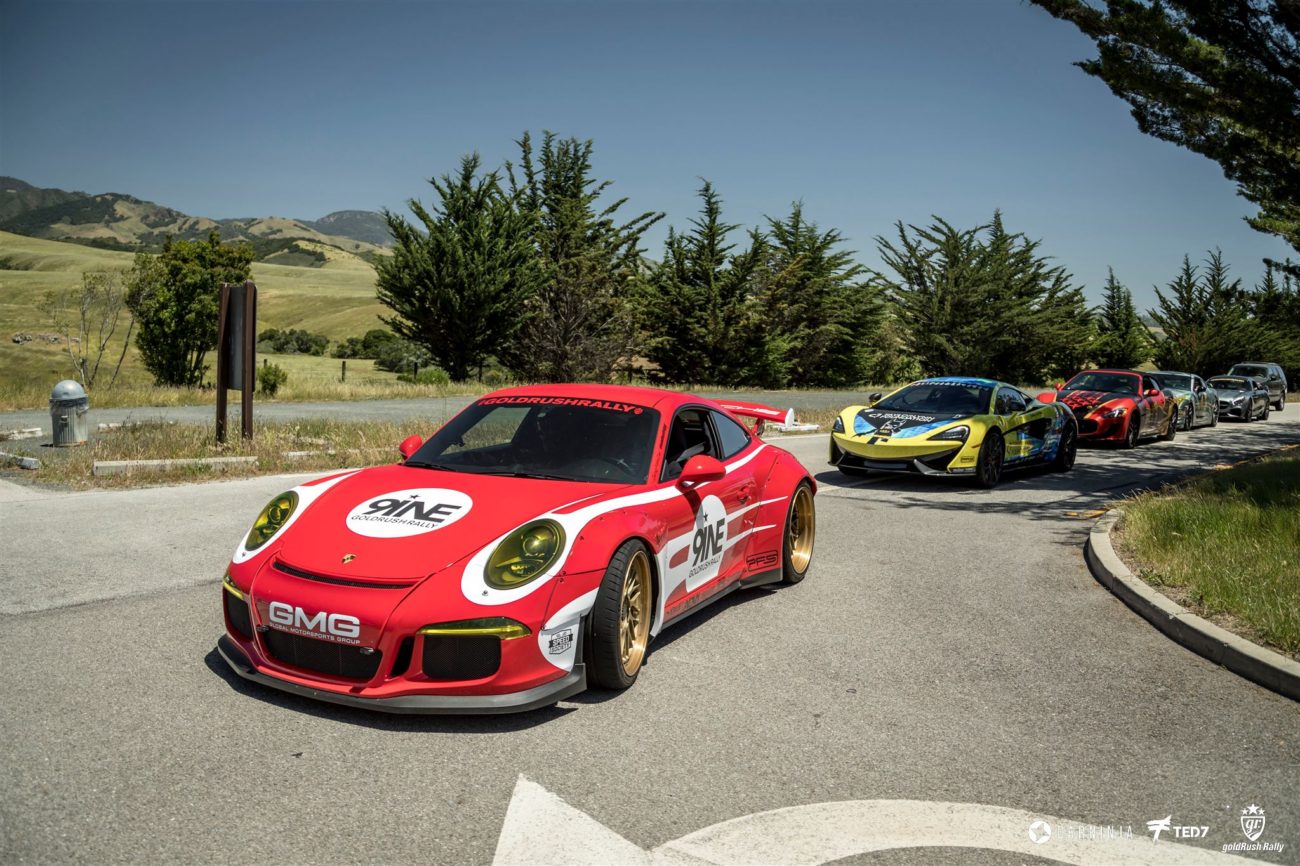 Pulling into the Hearst Castle for lunch (photo – Ted 7)

From there we made our way back to Highway 101 in the Libertywalk GT3 and headed North to San Francisco without incident. 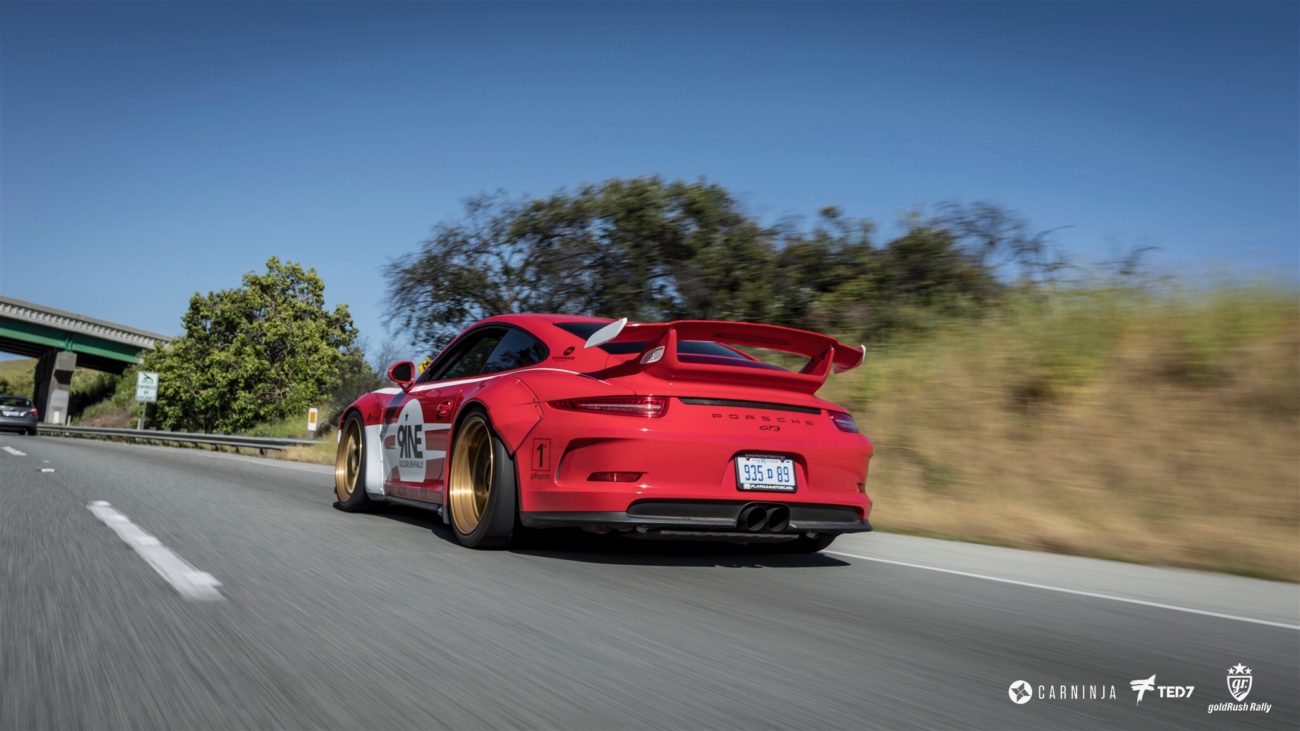 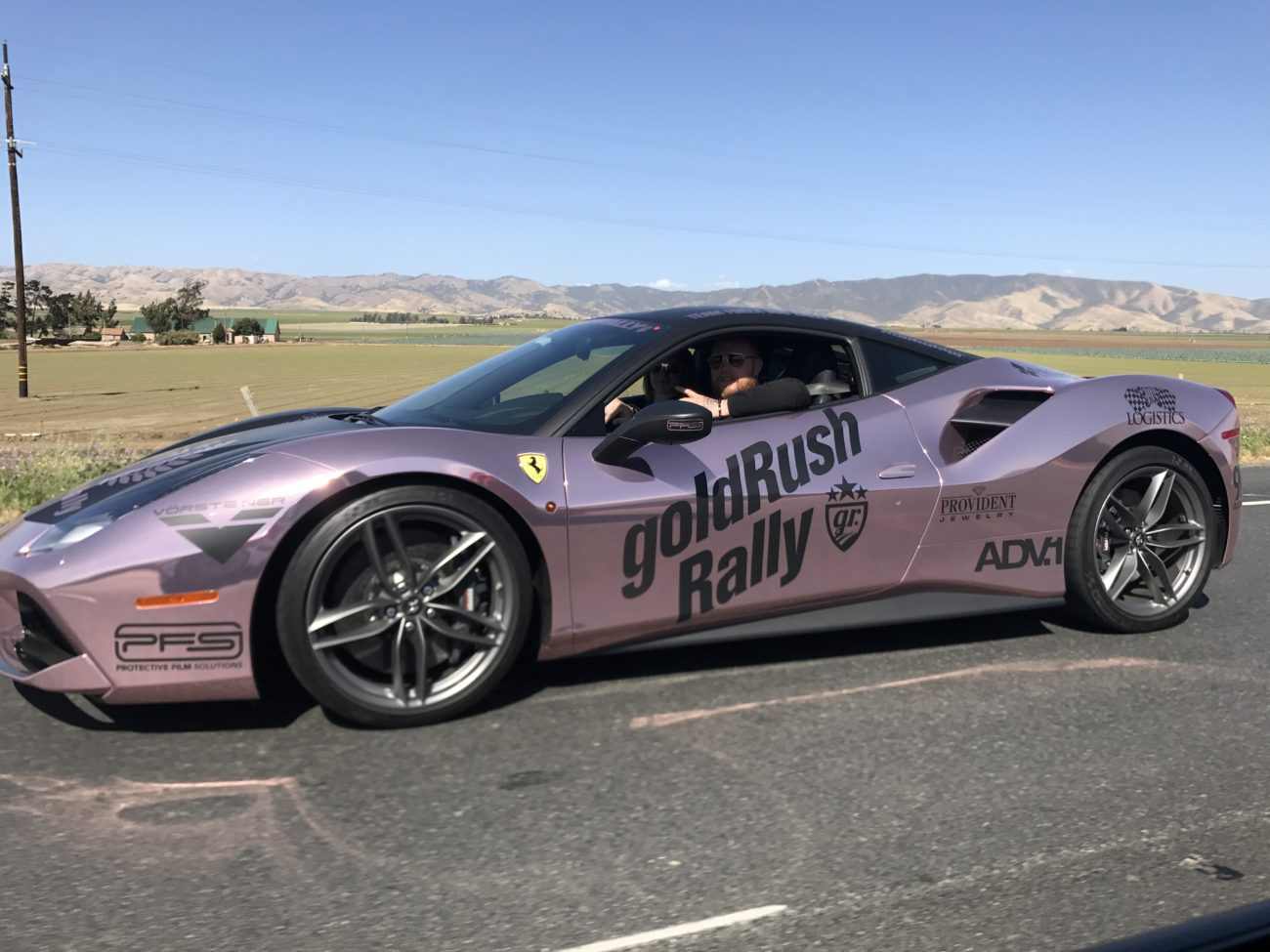 Steve & Pascale in their beautiful Ferrari 488 on Highway 101 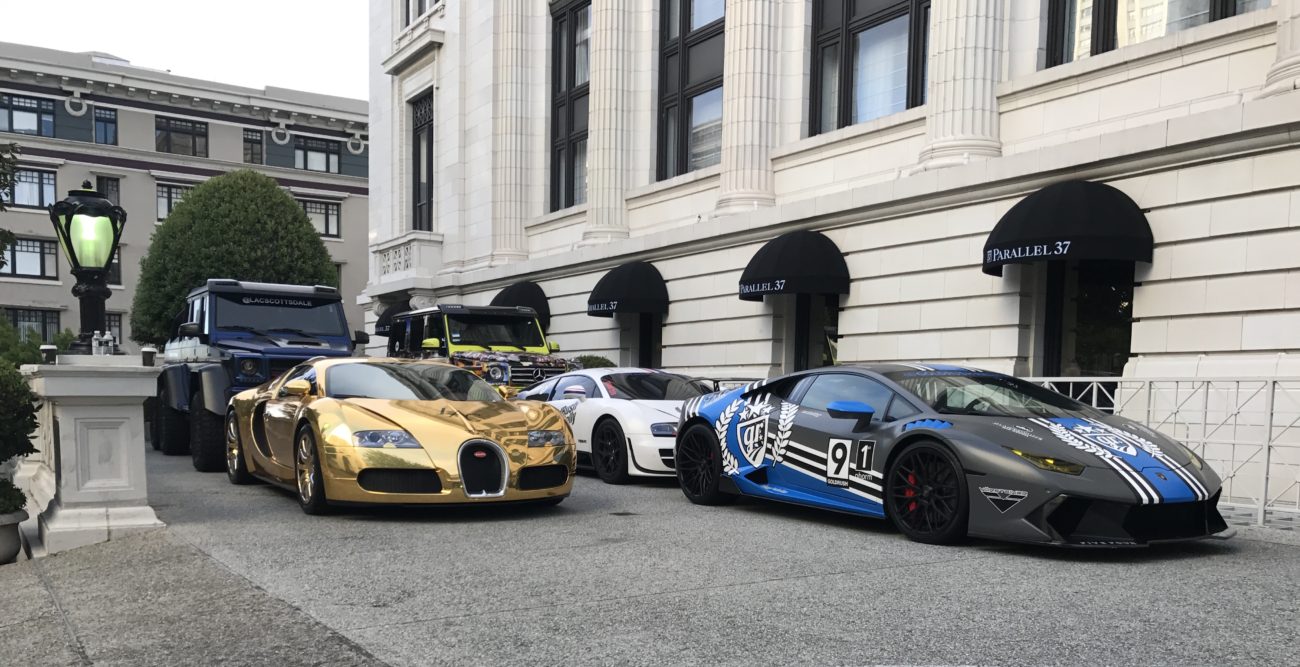 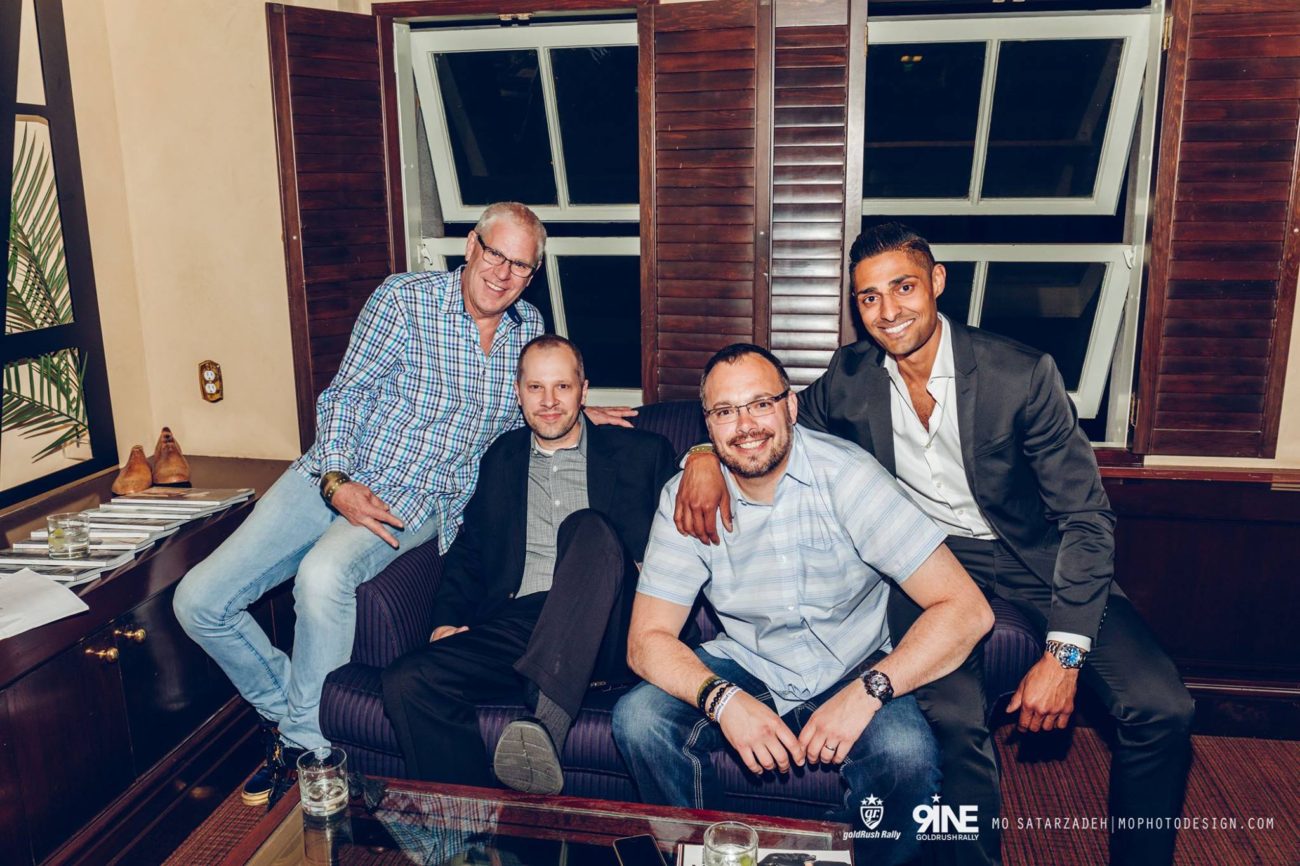