This is where we met up with Syed. He was able to get out a couple days early to come drive the road course and make the journey up to Seattle for the end of the first half/beginning of the second half of the rally.

The next morning I slipped behind the wheel for what was going to be our best leg of the rally yet. Syed jumped into the shotgun seat of Ben’s Bugatti Veyron Super Sport and we were off. The destination was Oregon Raceway Park for some laps around a really technical road course in the middle of nowhere. 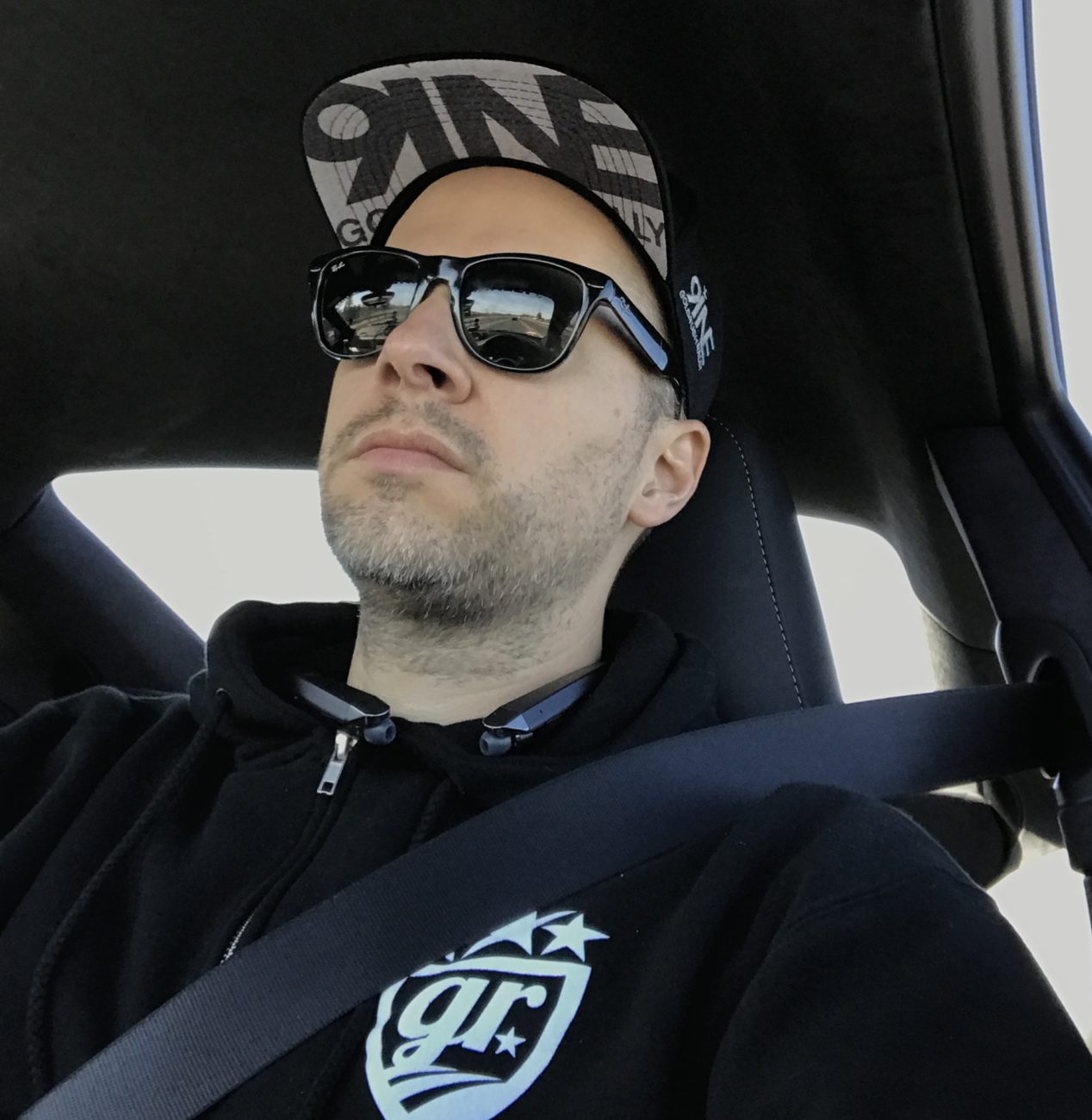 Leading the pack on I-97 in Oregon

After getting through Monday morning traffic in the small towns North of Sunriver, we exited the main road onto highway 97, the most beautiful meandering 2 lane roads I’ve seen. When the road straightened out I was easily able to reach 160+mph with ease leading our pack. There was no one out on these desolate roads and the scenery was breathtaking. Probably the best driving I’ve ever experienced. 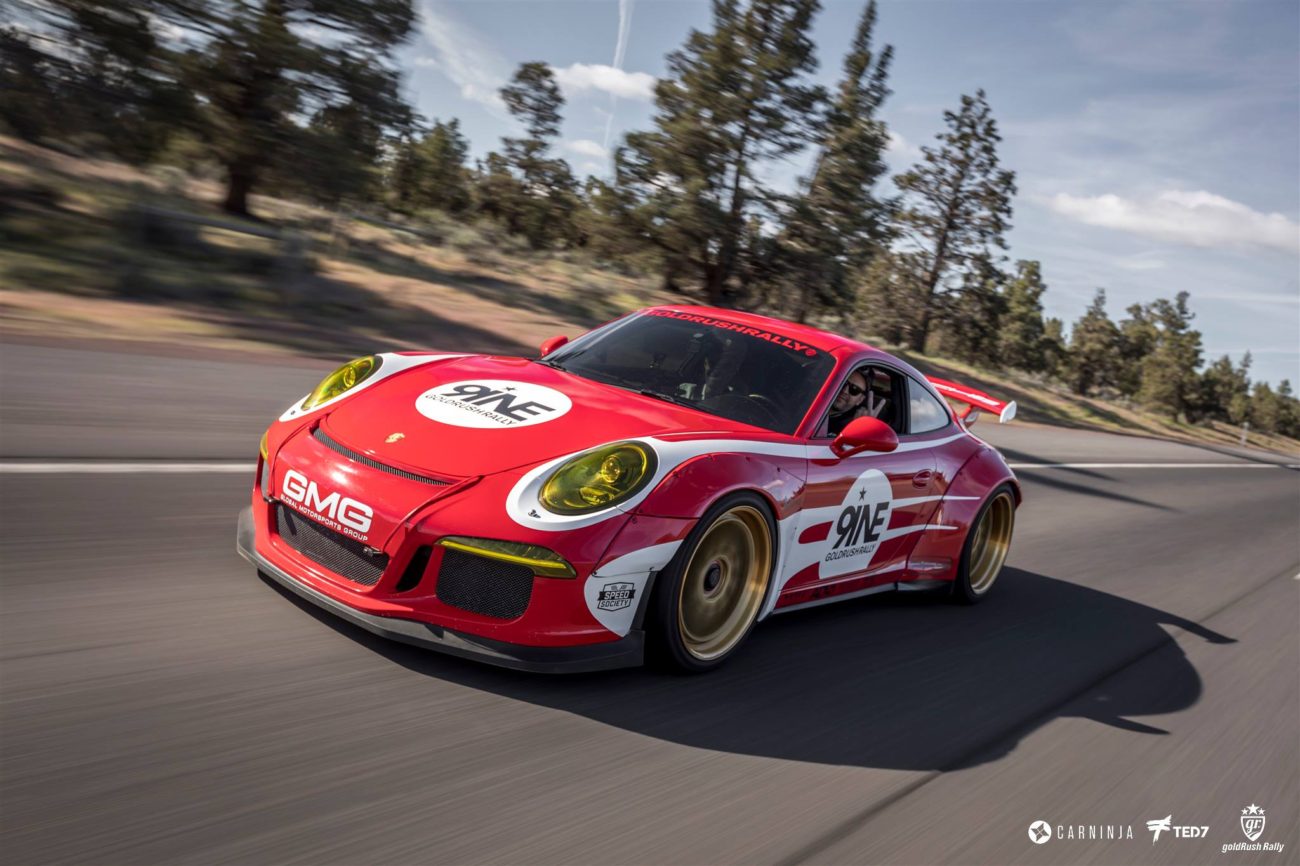 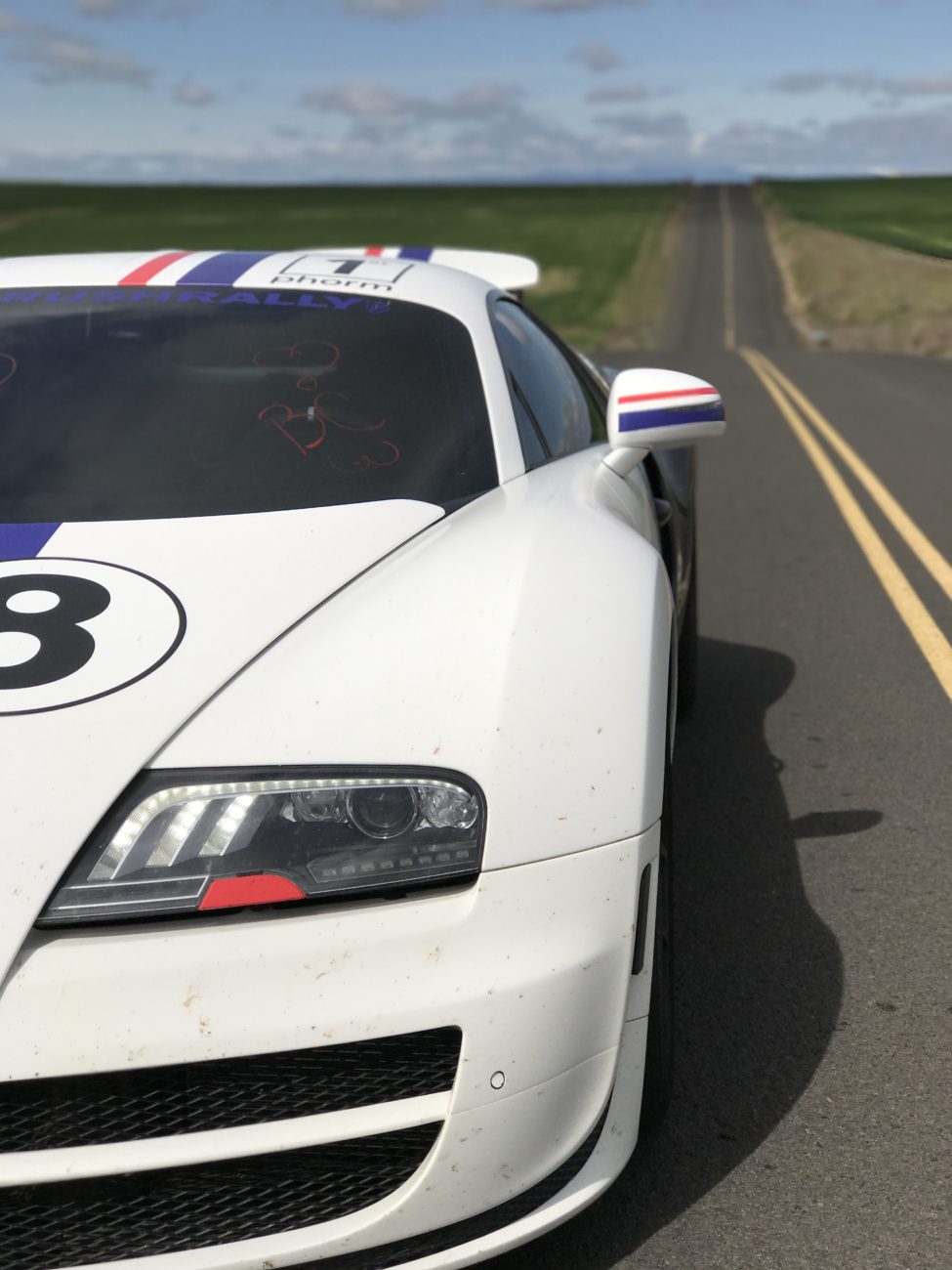 On one slightly downhill stretch I could see straight smooth road ahead for over a mile. I pinned the throttle down and the Porsche GT3 blazed through the gears to a speed of 181mph with Tim’s Alpha 7 GT-R a McLaren 675, Rich’s Corvette Z06 and others behind me. 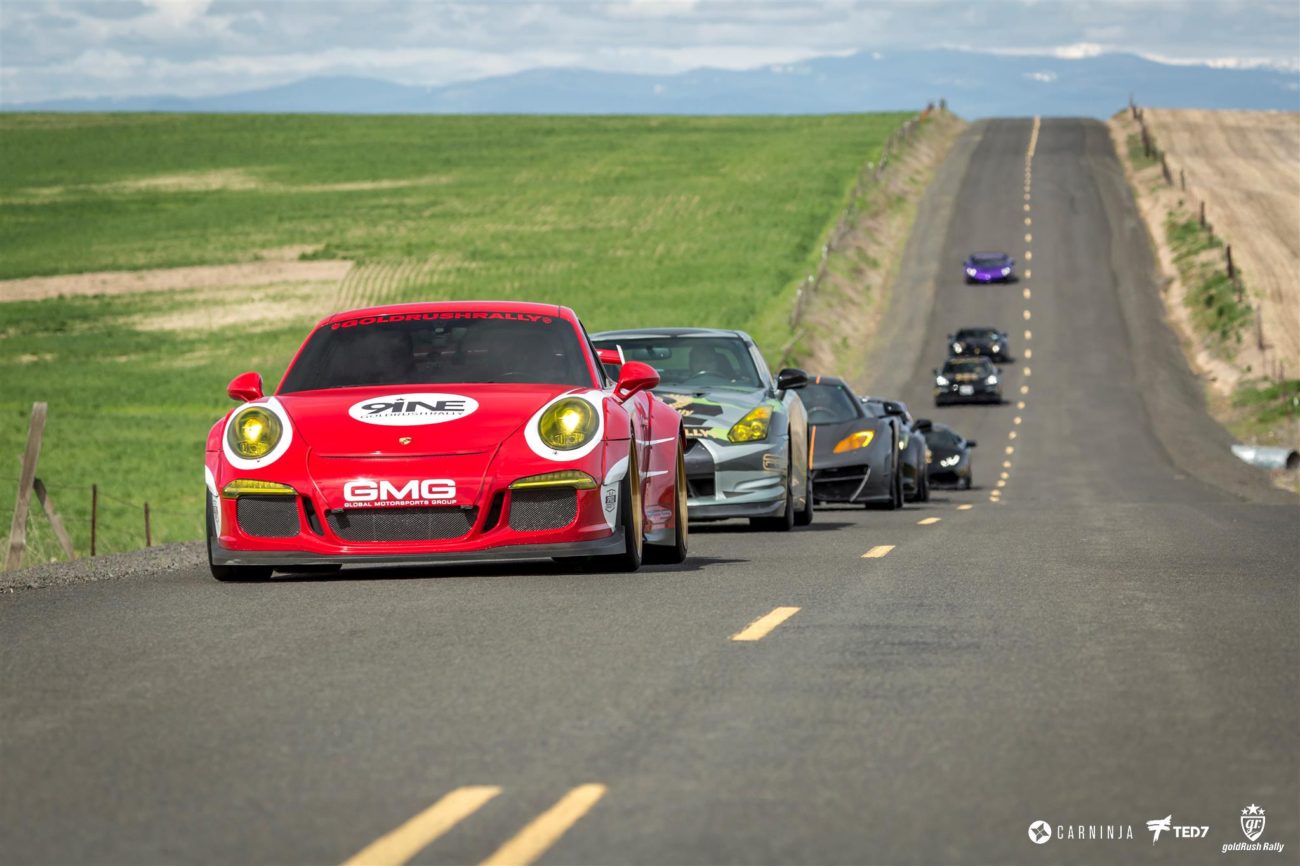 Once we arrived at Oregon Raceway Park, Syed took me out for some parade laps. It was a highly technical track with many elevation changes. He then went out for a session and enjoyed a little competition with the other Porsche GT3s track rats and other fellow GoldRushers. 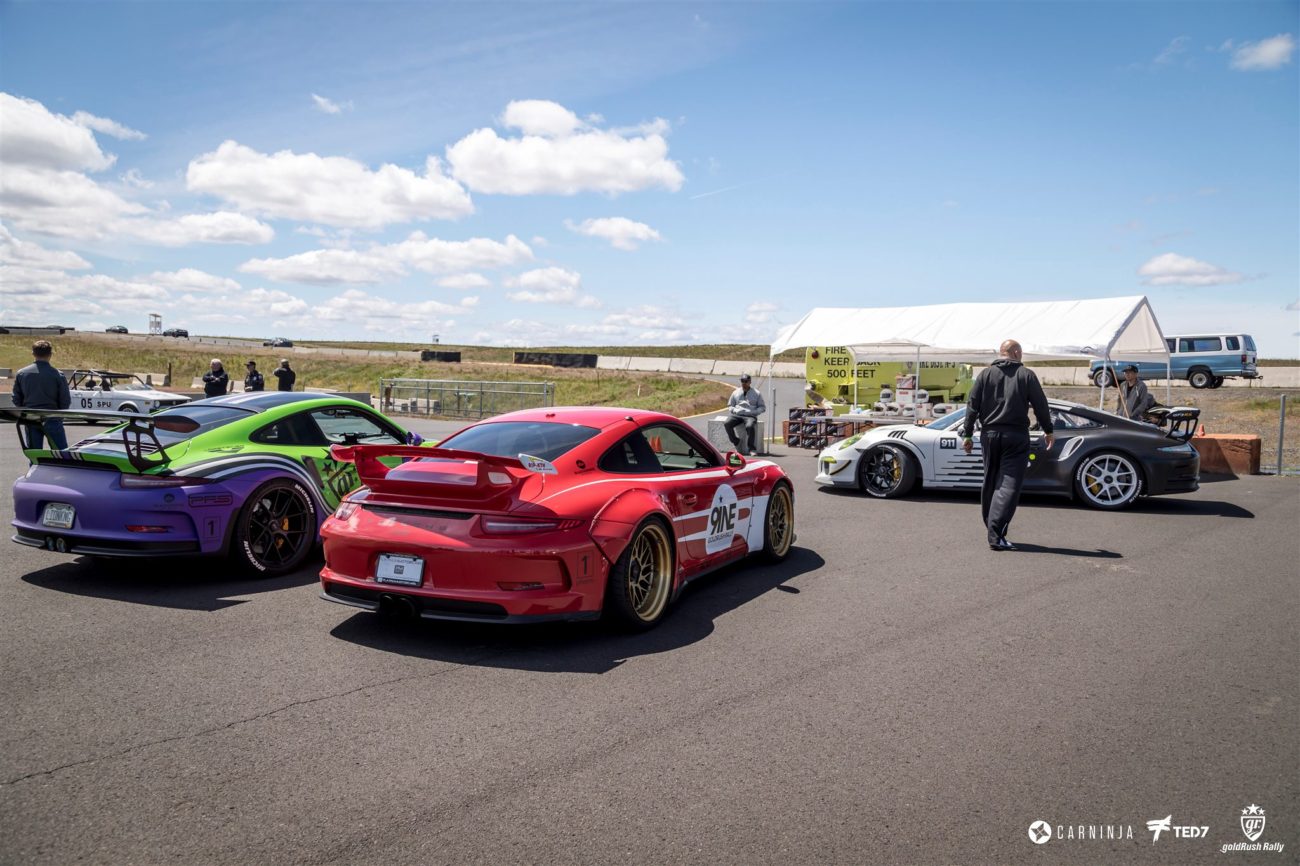 After lunch at the track, Shaun decided he wanted to drive the 2017 Lamborghini Omar was piloting and Omar wanted to drive our GT3. We swapped drivers and headed toward I-84 on the Oregon/Washington border. 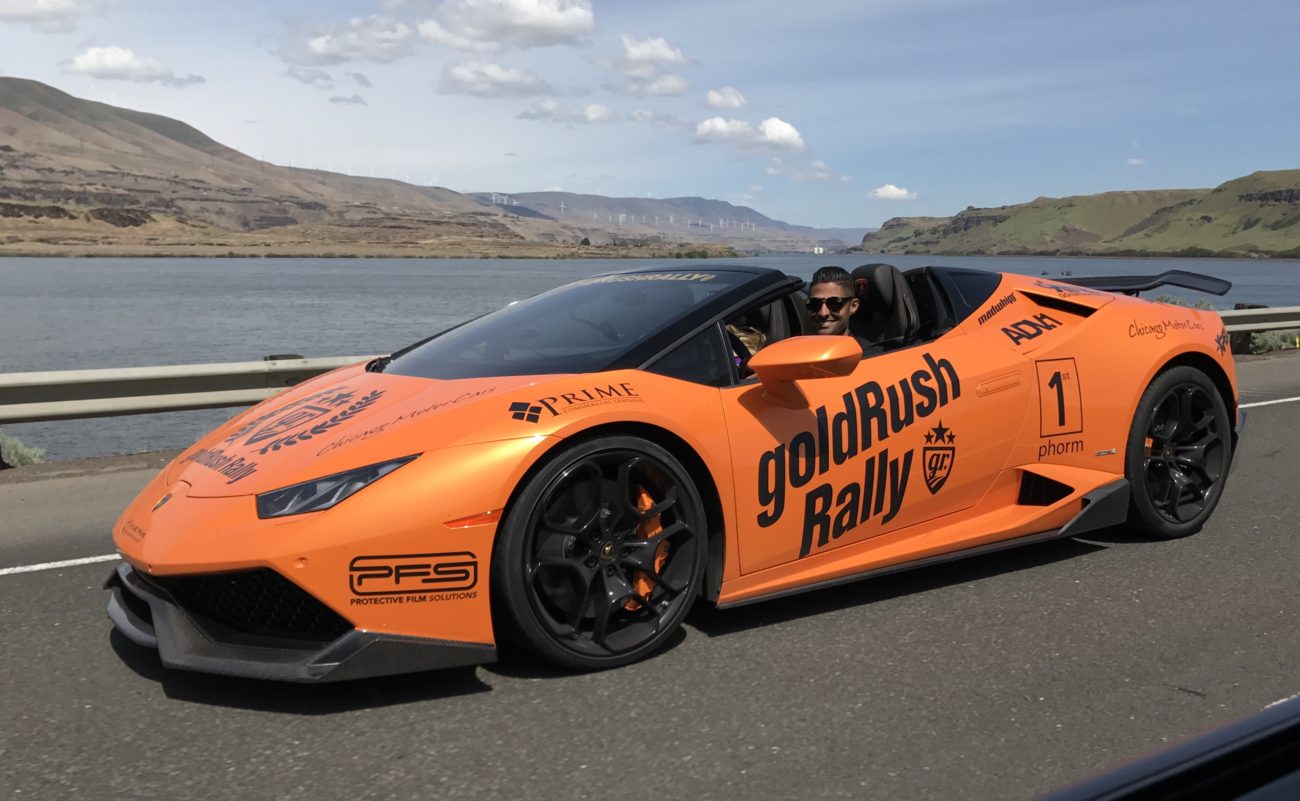 Shaun enjoying the drive in the Lamborghini Huracán Spyder

That Was A Close One!

Once on the highway we gunned it down I-84, a beautifully straight and smooth road right next to the Columbia river. Cruising in the low 100’s Omar decided to pick up the pace even more. The GMG exhaust purred as we piled on speed with Steve and Pascale in their rose gold Ferrari 488, Shaun in the Huracán Spyder & Tim in his Alpha 7 GT-R behind us. 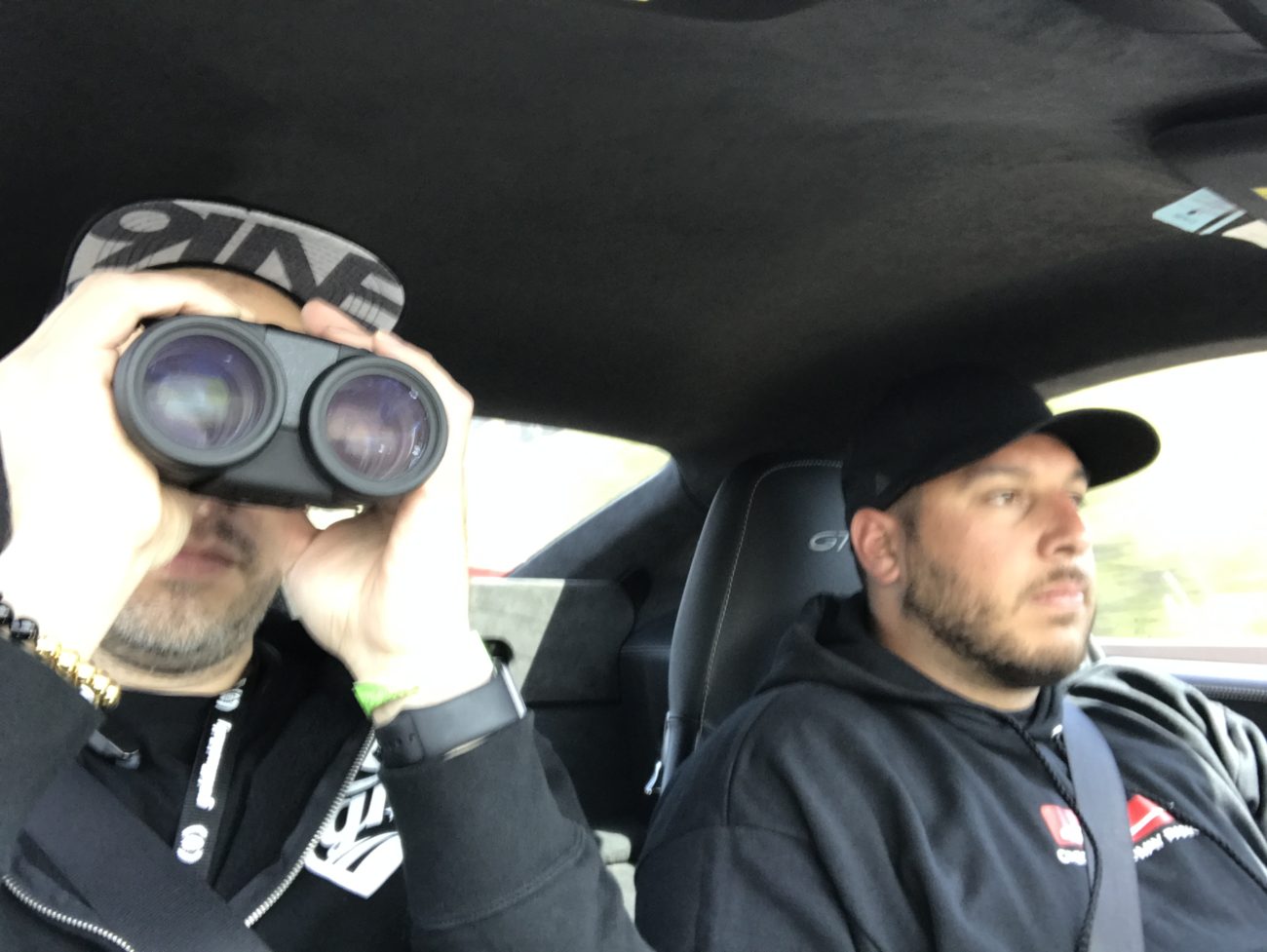 Spotting for Omar on I-84

As we passed the 130mph mark I was watching the vehicles ahead on the binoculars and saw what appeared to be a Dodge Charger passing a truck in the distance. I immediately warned Omar and he got out of the throttle. As we slowed down I made a positive ID of the car as an Oregon State Trooper and I commanded Omar to hit the brakes hard! A second after I uttered the words the Cop hit us with instant-on KA Band radar.

We paced him for a while wondering what speed he had gotten us at. A mile down the road he pulled off onto the side and let us pass. As we went by he got behind us and pulled us over. When he came to the window he explained they had been getting calls about a bunch of exotic cars speeding and had clocked us at 78mph. After running Omar’s license he came back to our car with just a warning and instructions to tell everyone they are waiting for us. 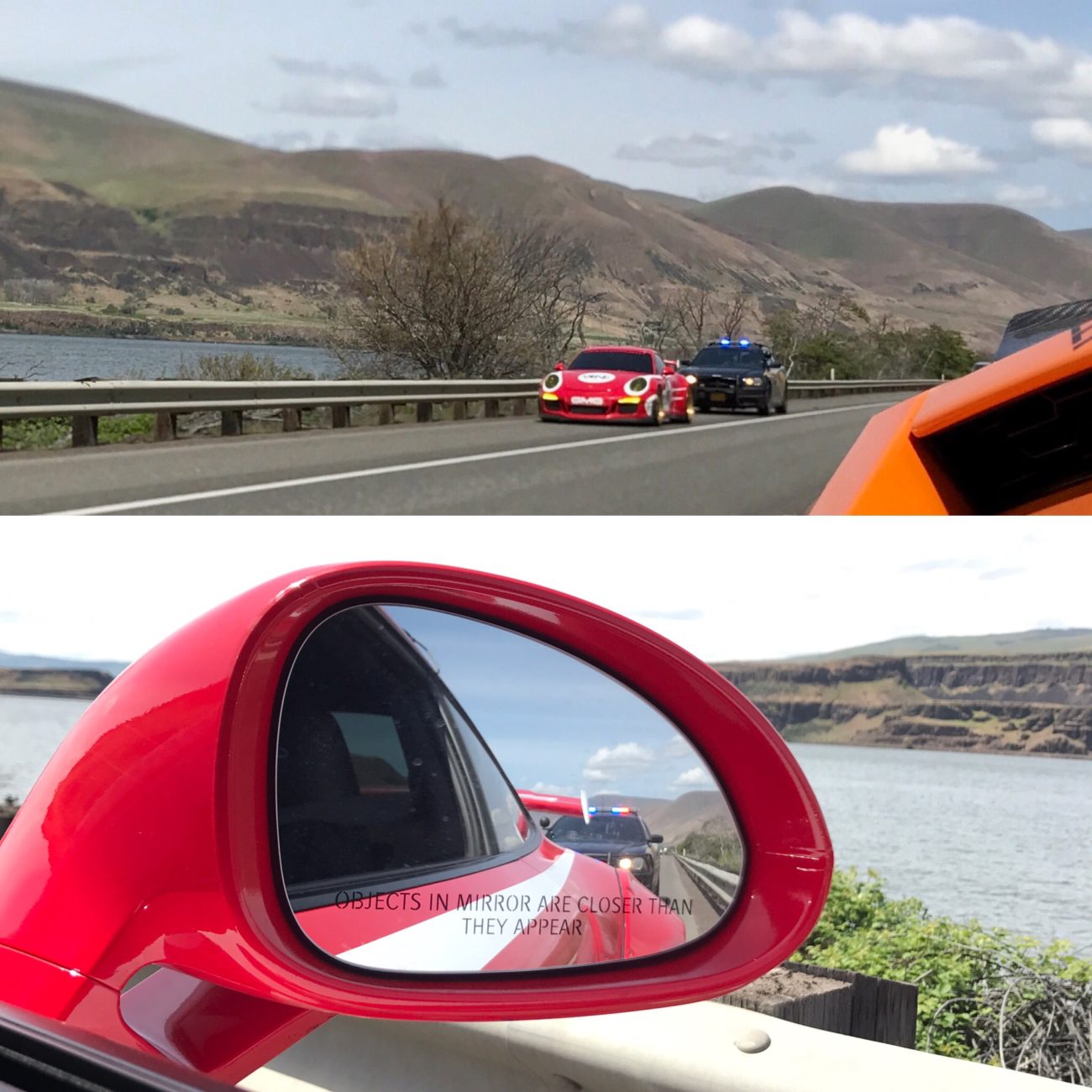 Pulled over by the Washington State Police

After another 50 miles on I-84, we pulled off the interstate at the Bridge of the Gods to pass over the river and into the State of Washington. Once in Washington we drove through some amazing, winding back roads through lush forests. It was another spectacular drive organized by the GoldRush staff. We made our way to Vancouver WA and got back on the interstate heading toward Seattle. Through some heavy rain we eventually got to our destination of the Fairmont Hotel. 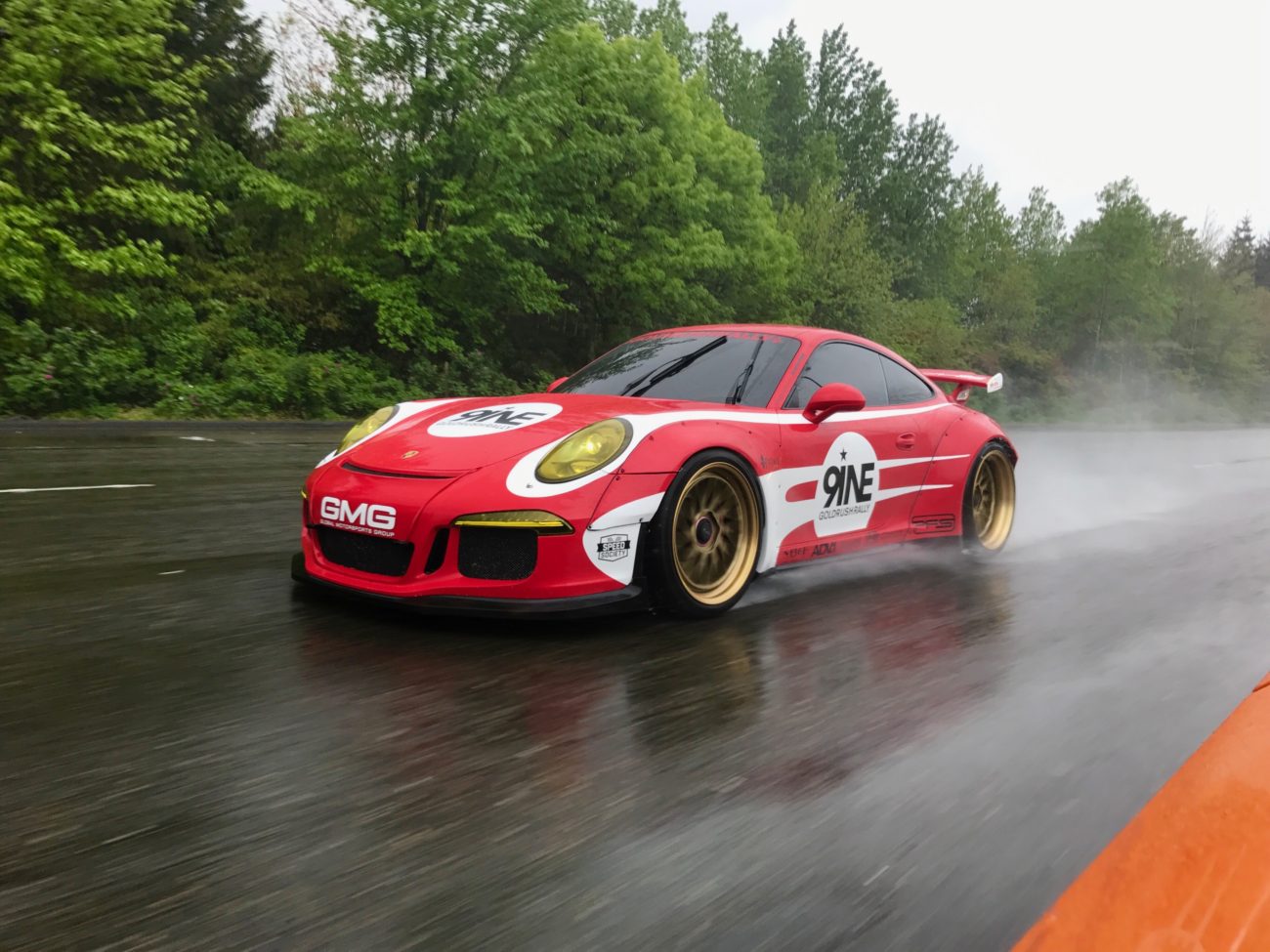 Heading North on I-5 to Seattle 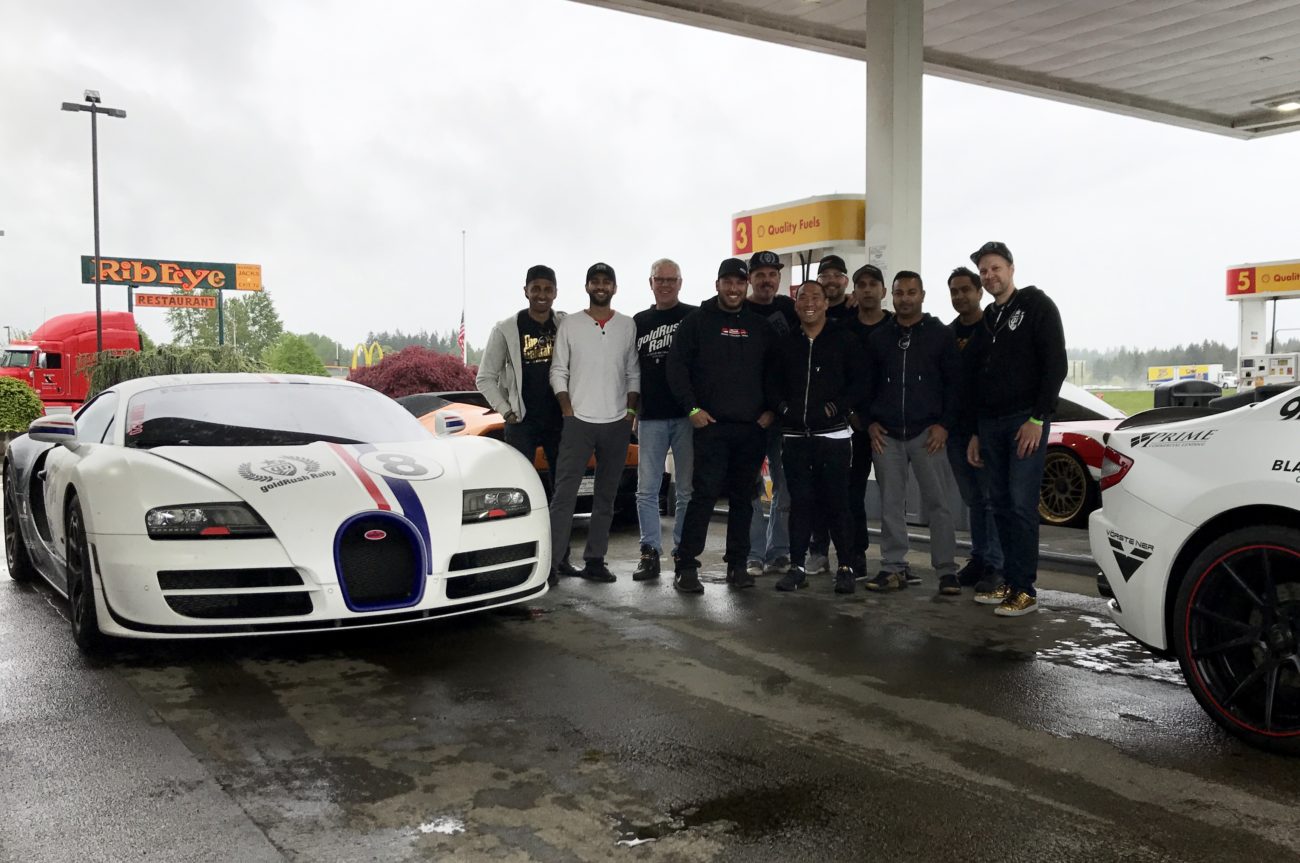 As we pulled into the gated underground parking structure it felt like what I’d imagine the start of the Cannonball Run must’ve felt like. Hidden from the publics view we parked the cars with other GoldRushers deep in the parking structure hidden away from the publics eye. It felt like a surreal underground club of interstate outlaws. It was like we were in some sort of movie with a bunch of scofflaws, who choose to seek out the rush of playing cat and mouse with the Police at speeds we won’t mention.

The underground lair of highway scofflaws