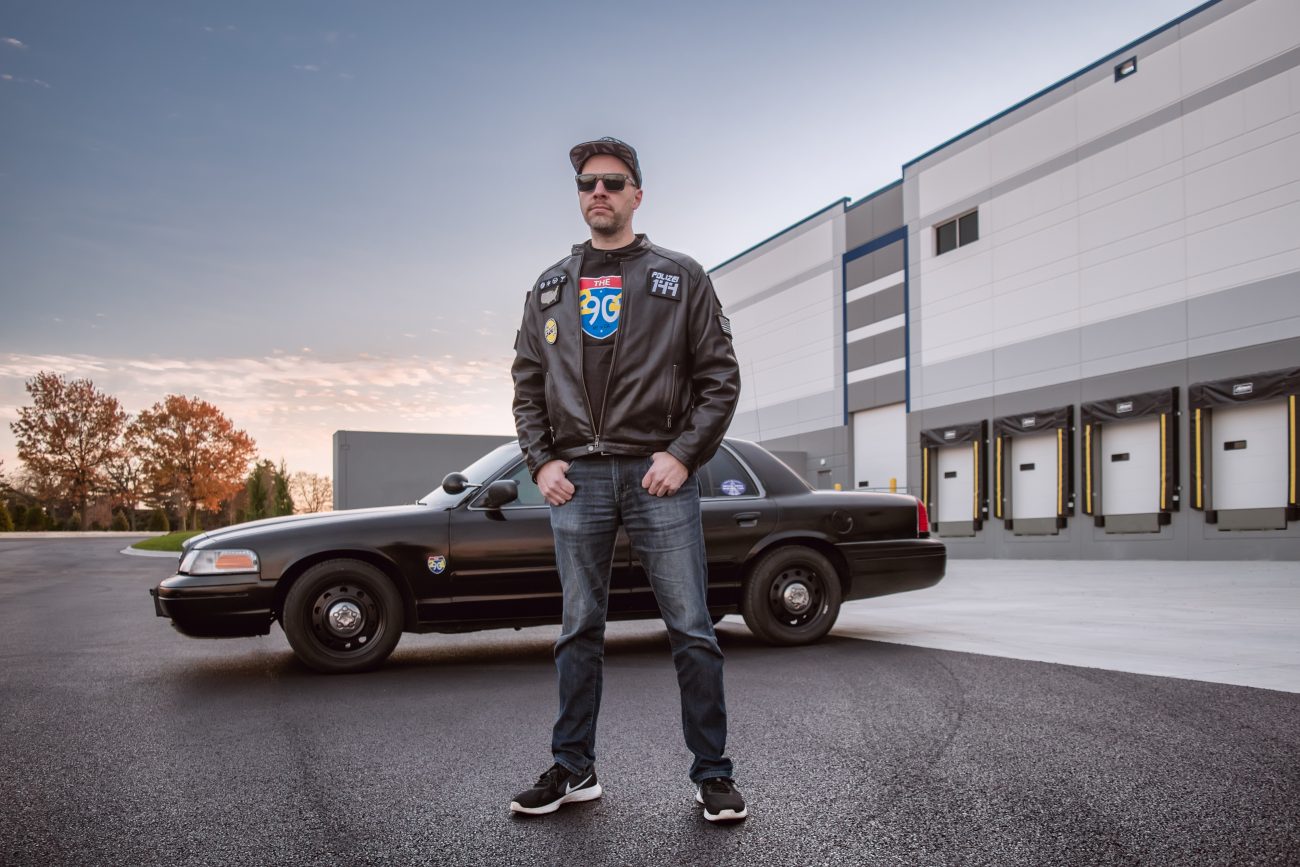 Nearly 3000 miles separate New York from California. In the 1970’s a group of automotive outlaws would race across the country for bragging rights and to prove qualified drivers could travel at much higher speeds than were allowed by law. As I learned about Brock Yates’ Cannonball Baker Sea to Shining Sea Memorial Trophy Dash (or probably better known as the Cannonball Run) as a young automotive enthusiast it was a captivating idea. Little did I know later in life, I would work my way through nearly every form of Motorsport finding myself still searching for something. What do you do when you’ve done it all? Cannonball!

My Quest For Cannonball Glory

The one-off time trial efforts led by Alex Roy and Ed Bolian had been amazing, compelling, and stirred the pot of my enthusiasm but I wanted to find a real Cannonball-style race. In 2015, The 2904 had felt as close to the real thing as anything could come. The idea of an organized group race across the country remained the holy grail for my efforts toward personal Cannonball glory. I felt like we had a chance to win in 2015 and Bolian had acknowledged that, but I couldn’t cope with never bringing home the title.

The brainchild of event organizer John Ficarra, The 2904 is sort of the 24 Hours of Lemons meets the Cannonball.  You have to buy a car and pay for fuel, tickets and tolls and race across the country for under $2904. Safety related items like brakes, suspension and tires are exempt from the budget but engine modifications, repairs and Police countermeasures are not.

When I heard about the very last running, I immediately signed up. I’d been holding onto my former Police Car and Taxi Cab Ford Crown Vic, the P-71 Blackturd for just such an occasion. The car was fully prepped and sorted out, $50 paint job and all. This was my last chance to set a record for a cross country race. 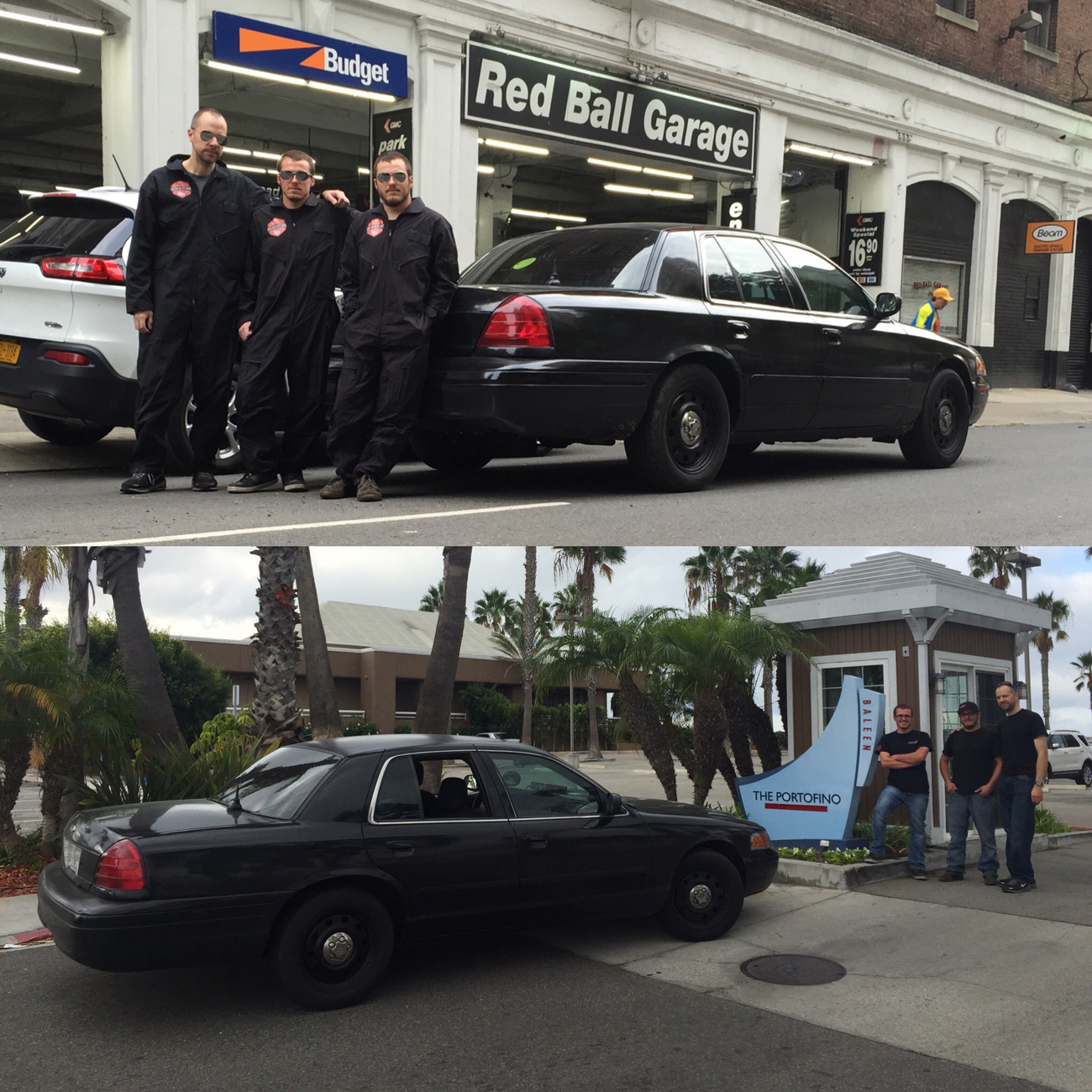 This final running of The 2904 was finishing in San Francisco after departing from the famous Red Ball Garage in Manhattan. This added 100 more miles and no options for route as compared to finishing in LA. In addition, The C2C Express would also be running with us making this the biggest field of cars in a cross country race since the last US Express in 1983. 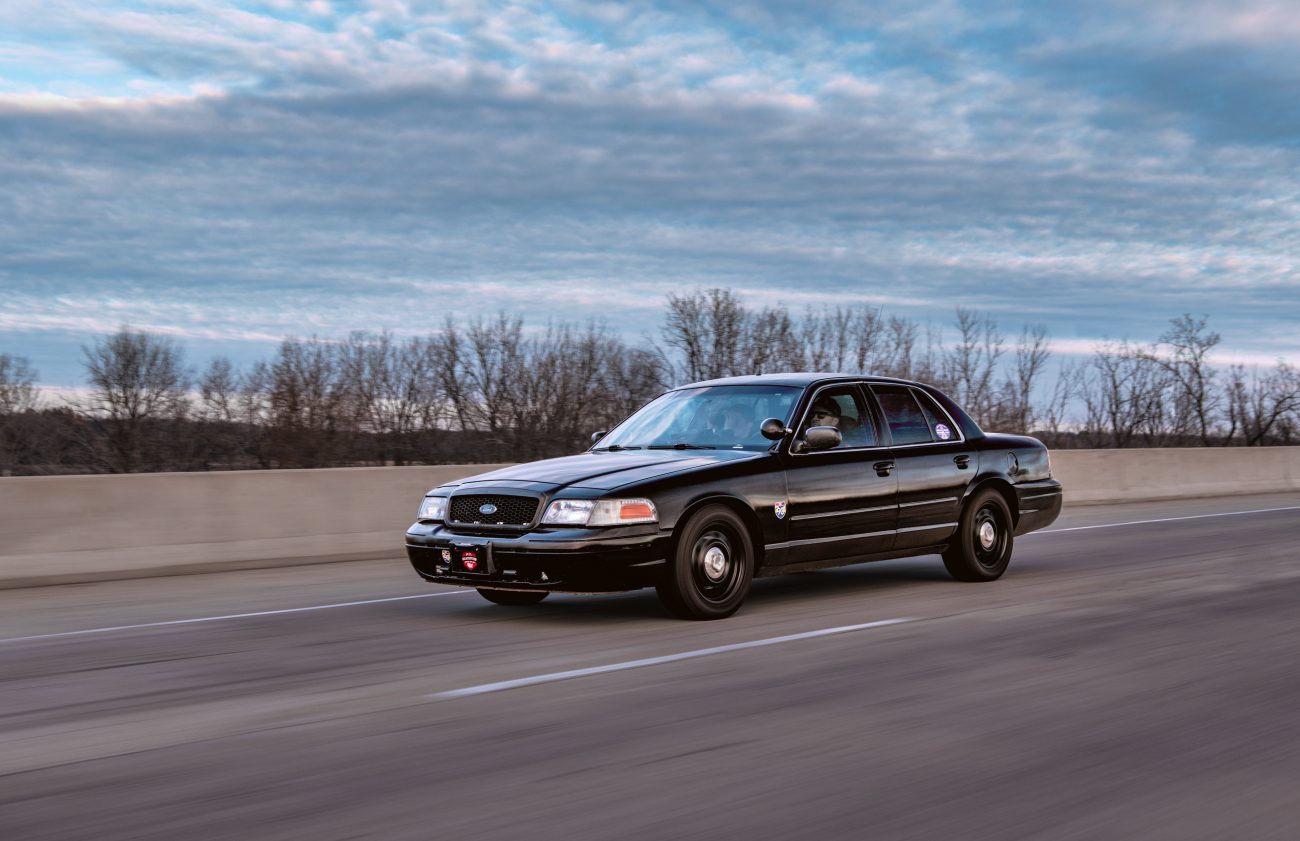 This Years Fraternity Of Lunatics

The roster of teams was impressive, made even more so by some last minute car calamity amongst the field. Ed Bolian was back again, this time in a 1995 Cadillac Limousine that he had bought 5 days before departing Atlanta for New York. John Ficarra’s Saab had broken so he would be joining Ed in the spacious limo along with his co-driver from the original run, Alex Richter. They would have a fourth driver, John Harrison who had served for years as the grand poohbah of 2904 and was a veteran of the 1979 Cannonball. Yumi Dietz, former record holder of the Solo NY to LA run and NY to SF run. Forrest Sibley, one of my co-drivers from the 2016 C2C Express was coming with Atlantic to Pacific record holder Bill Farmer. There was a beautiful 78 Camaro, a 74 Monaco, a 383 powered Olds Omega, a 78 Monte Carlo with over $30k spent on it, a V-8 powered Maverick, a Buick Riviera, a Mercedes 300D, and more. It was the largest selection of overly ambitious garbage cars I had ever seen. 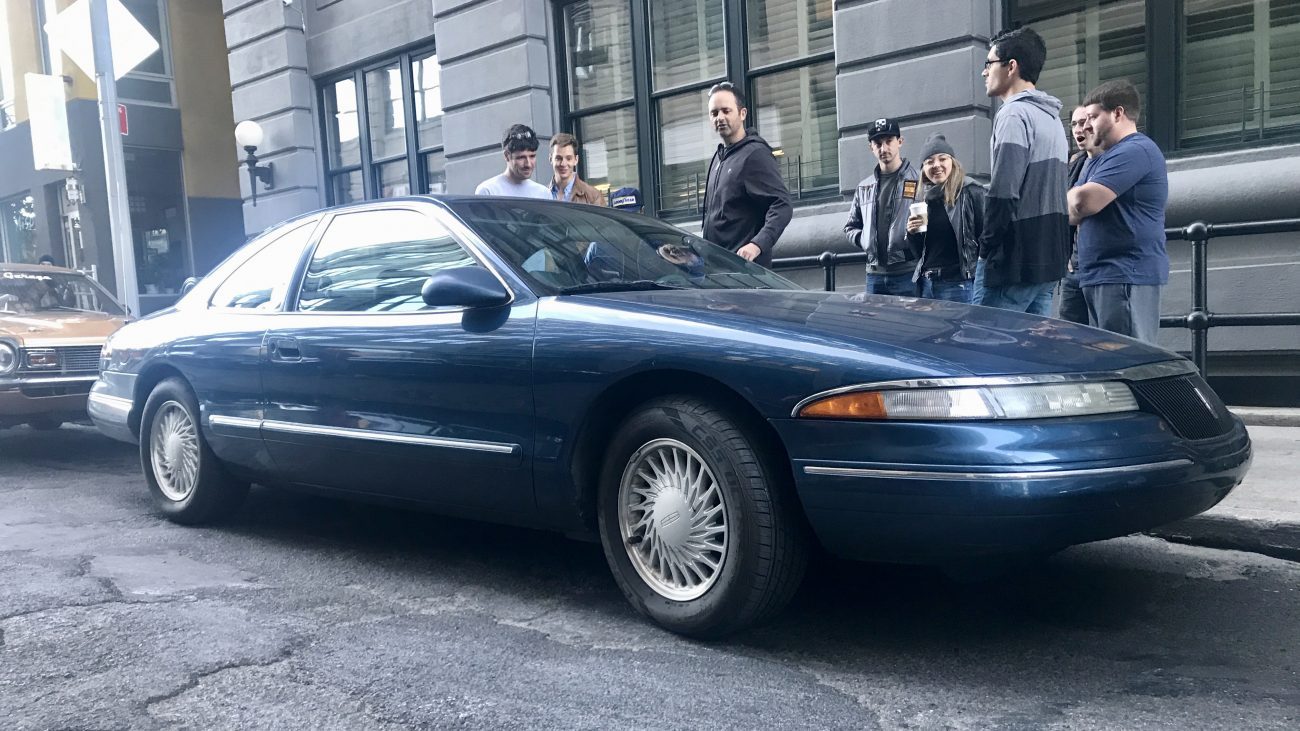 Martin Dyhr brought out a Lincoln MarkVIII – killer car for a budget run! 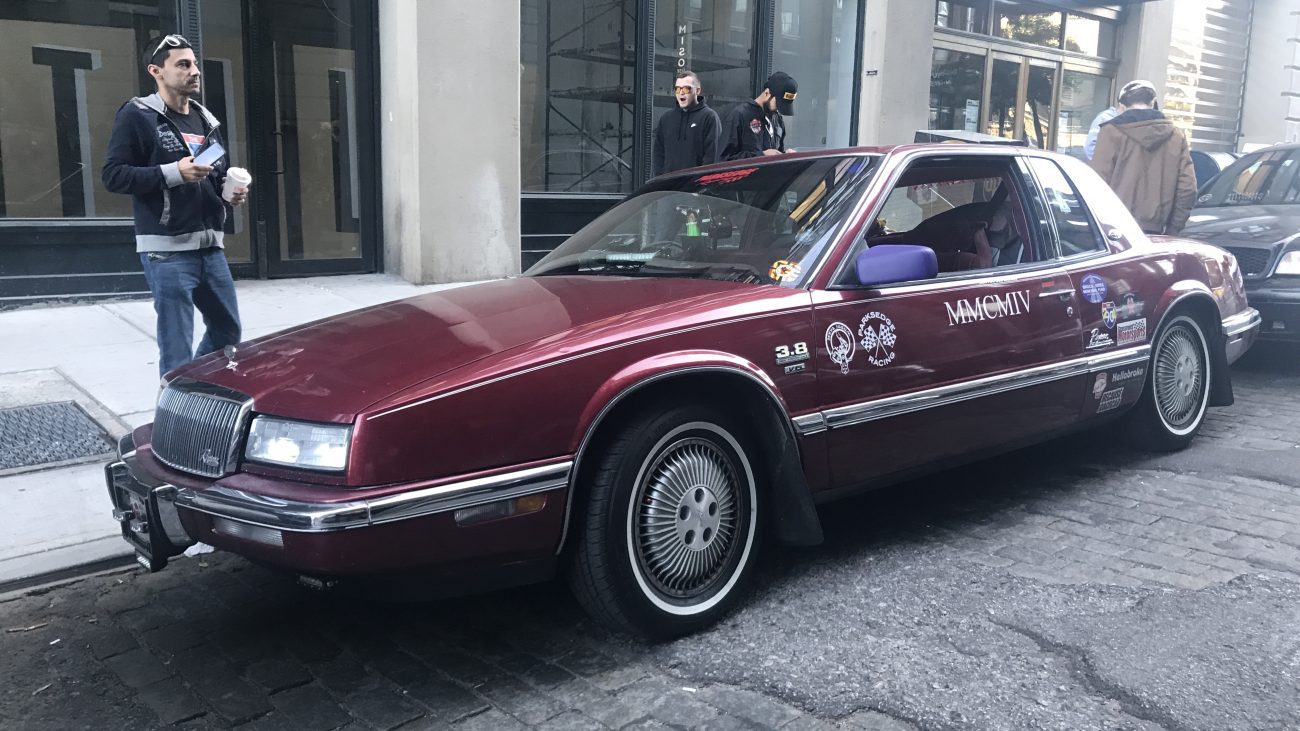 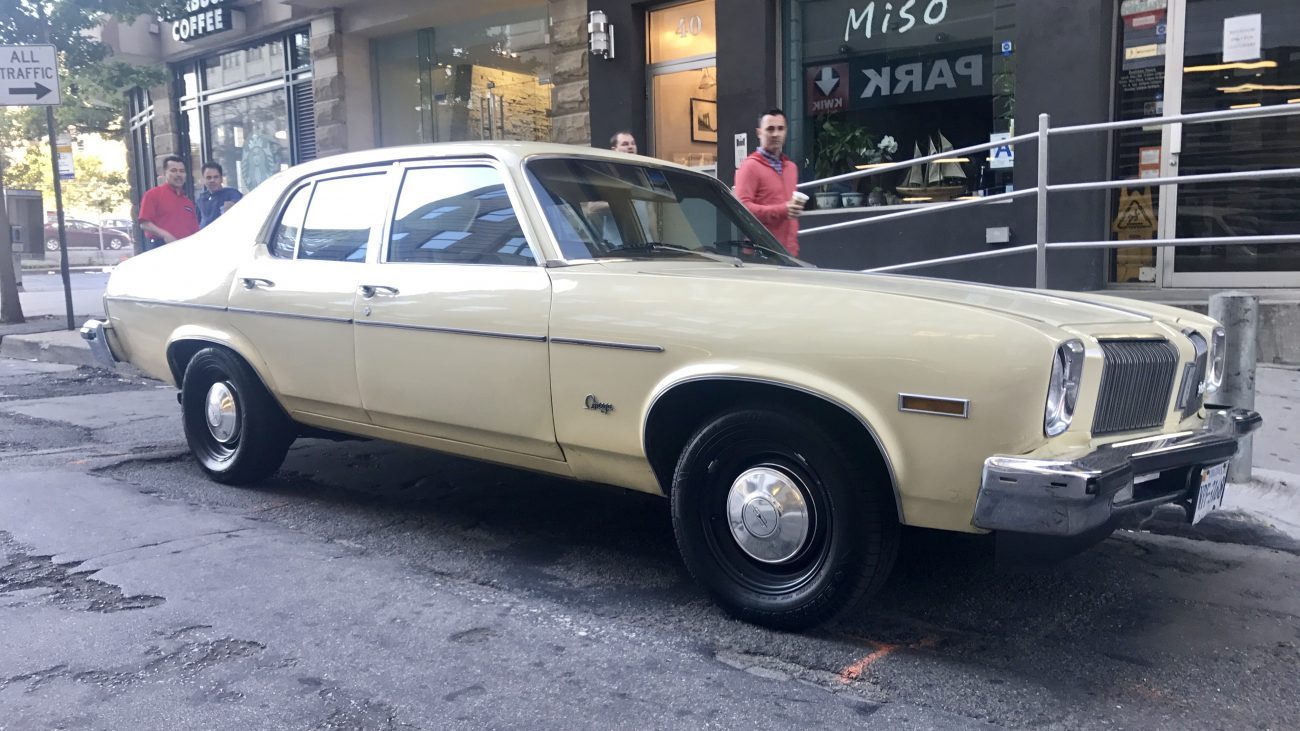 Sizing Up The Competition

I knew we had a good chance. Ed was no threat by his own concession and based on the fact he was in an untested and mostly stock limo. There was a 9C1 Caprice that sounded great on paper but looked a bit rough. A well prepped Lincoln Mark VIII from another team would perform well but lacked a fuel cell. Doug Tabbutt from Switchcars was along running in the C2C Class. Rather than being a separate event like we won in 2016 in the Bluesmobile, the C2C was running with 2904. Their lenient rules of an unlimited budget for repairs and mods after a sub $3k purchase price of a pre-1980 car meant Doug could spend $30k+ building a full pro-touring spec car and it was going to be competitive if it held together. 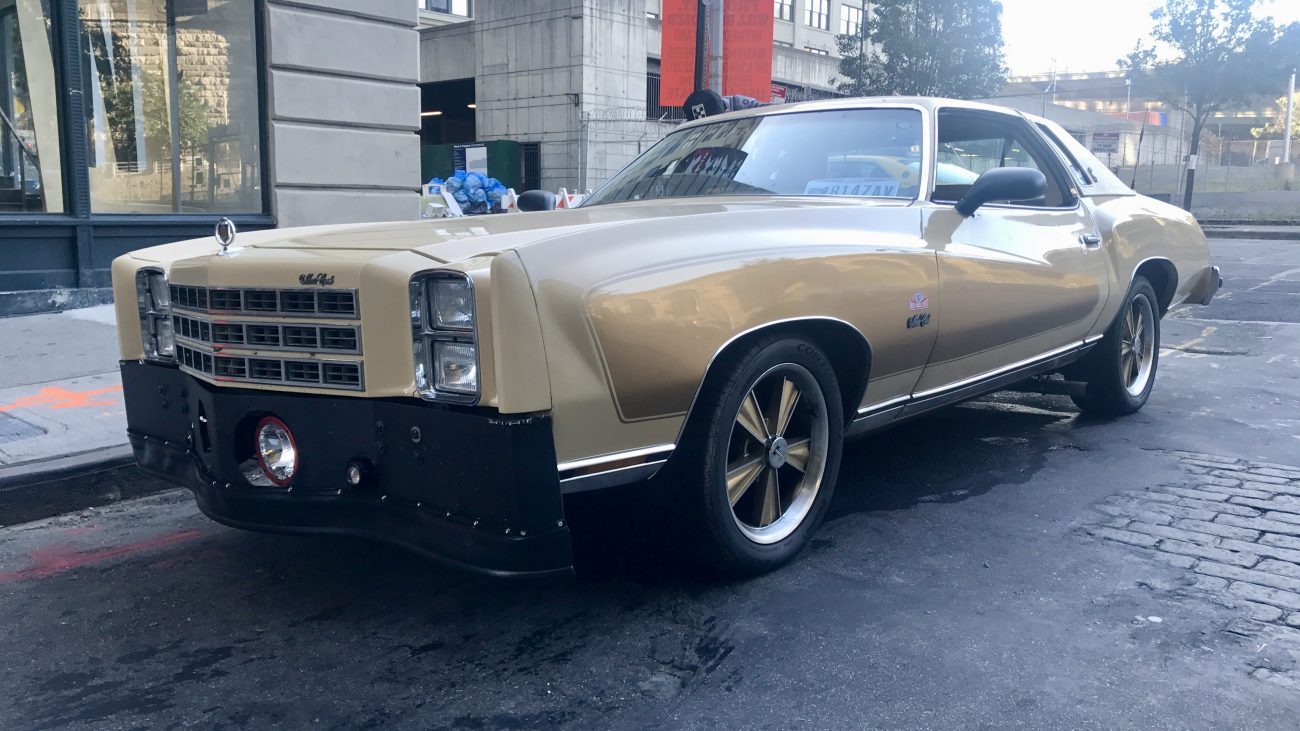 Doug’s LS Powered Monte Carlo with an arsenal of countermeasures

This time my team consisted of Miles Compton from the 2015 run and a newcomer Syed Ahmed. Syed had allowed me to use his car and take his spot on the goldRush Rally earlier in the year and I wanted to repay him the favor. He gave me a Liberty Walk Widebody Porsche 911 GT3, luxurious 5 star hotels to rest in, and first-class parties at the hottest clubs. A non-stop run across the country in a former police car/taxi cab should be a good way to repay him right?! 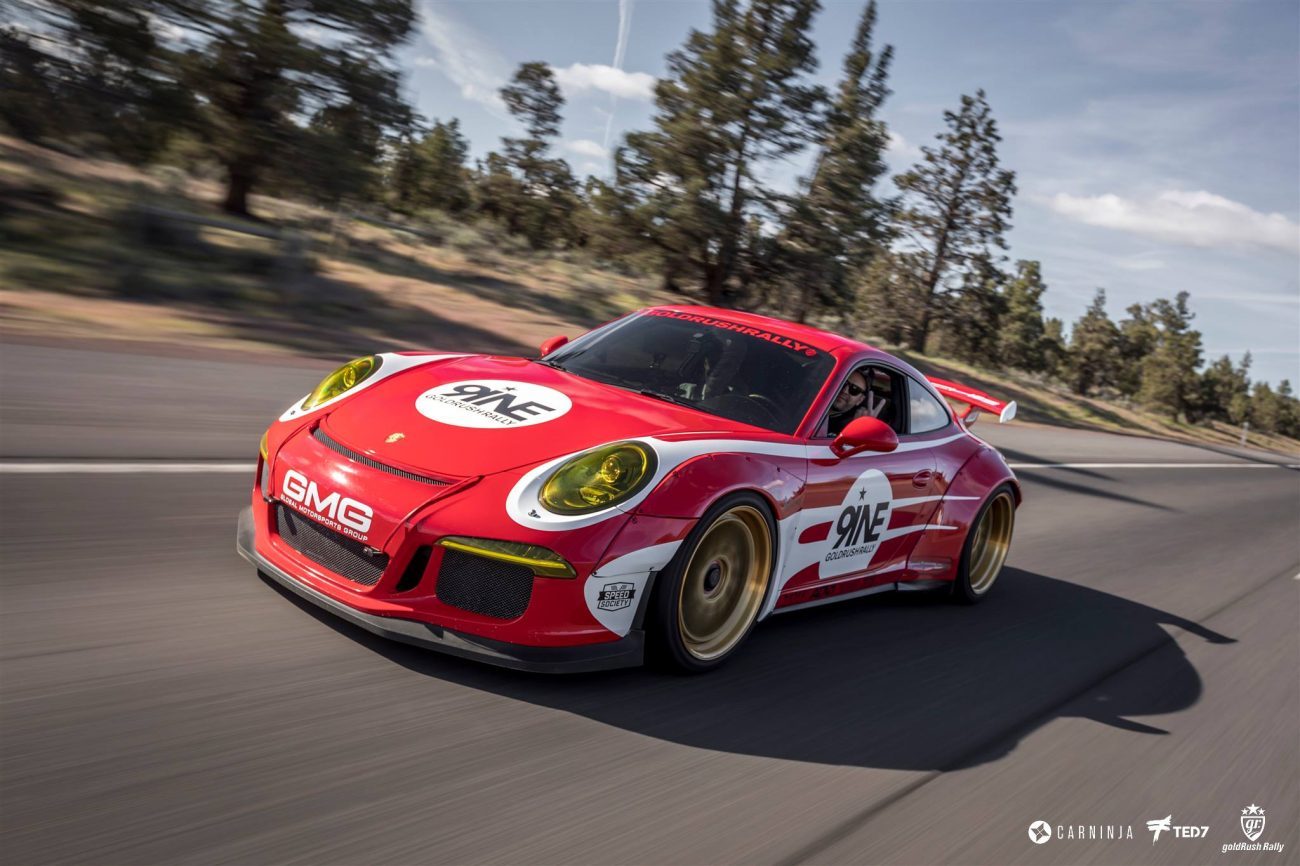 Blazing a trail up the West Coast on goldRush Rally 9. Thanks for the Porsche Syed! (photo – Ted7)

I’m Going To Win This For You Dad

This year has been a busy one for me and I had very little bandwidth to prepare. Fortunately, the car was pretty much done. We had prepared the car for the 2015 run and were pleased with its performance, just not with our execution of securing a strategic departure time.

To add to my obstacles to preparation, just a couple weeks before The 2904, my Dad was diagnosed with cancer of the esophagus. Due to his weak condition Chemo or surgery were out of the question so it was only a matter of time that he had. A week before leaving for The 2904 I told him “I’m going to win this for you Dad.” It just came out. I didn’t plan to say it but after I did, I knew I had no choice but to make it so. 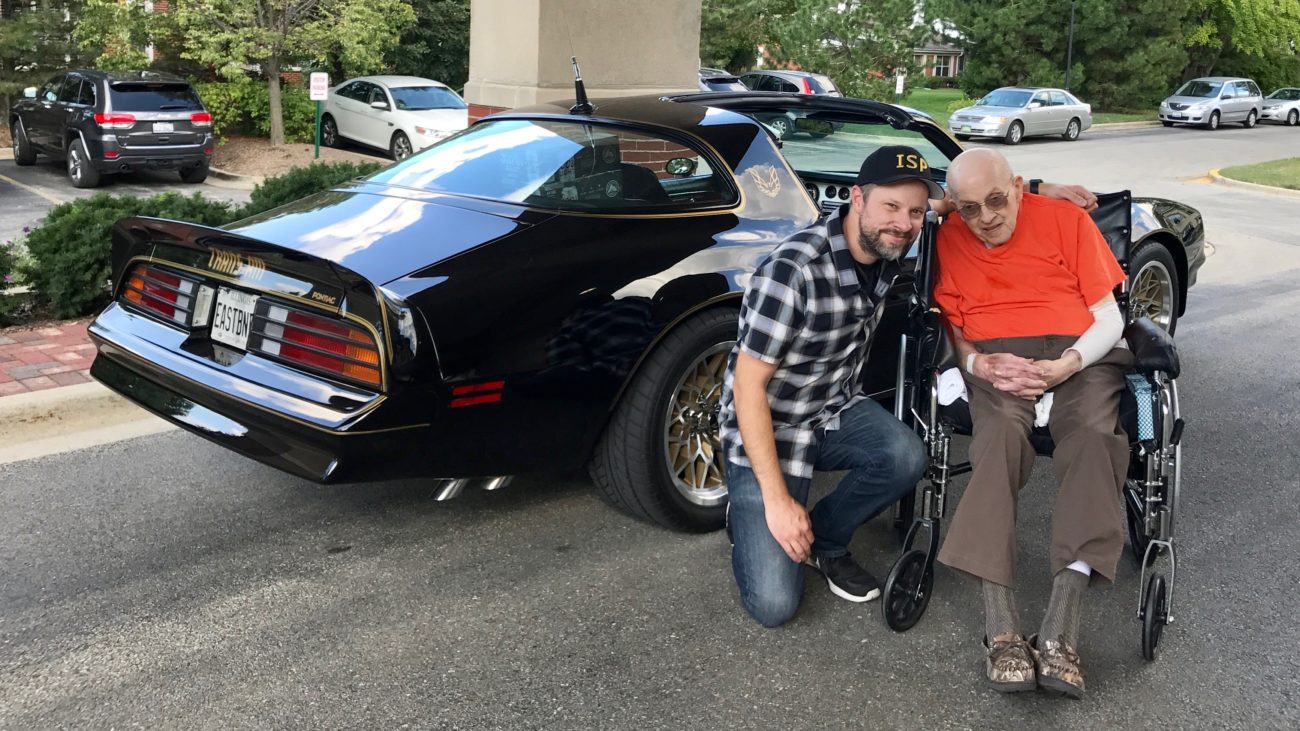 The Key To A Win

What worried me the most about this year’s race was getting decent start time. It’s a bit tricky to time things out as you’ve got a few key variables that can wreak havoc on your overall elapsed time. The most important thing being your arrival time in California. In 2015 I lost my preferred start time and ended up with a later one making my arrival in LA at 7am on a Monday morning. I shuttered to think about having to lose over an hour in traffic again costing me a win.

The next consideration is leaving Manhattan. Although it is only 4 miles to reach New Jersey through the Lincoln Tunnel, it can take 45 minutes or more to exit the city if you depart at the wrong time. I knew the window to arrive in San Francisco would have to before 4am or after 10pm due to the heavy traffic there. 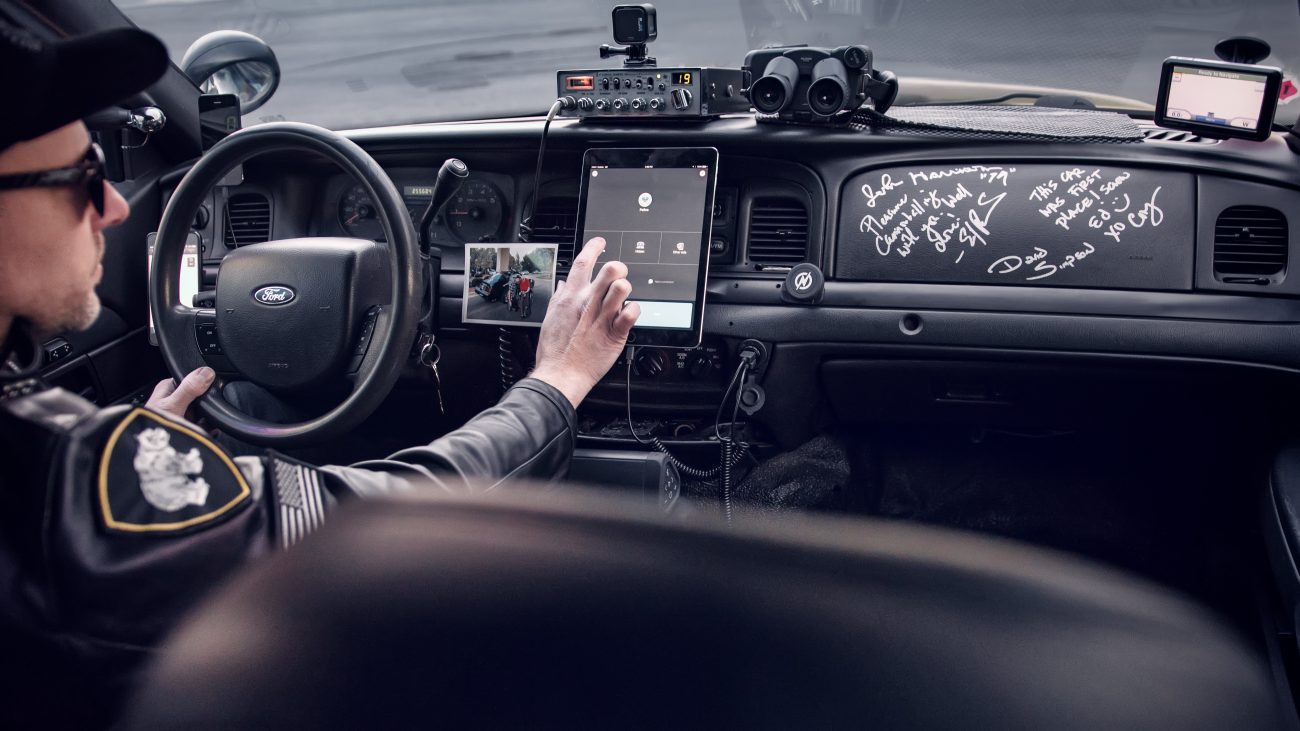 The interior of the P71 Blackturd (photo – JR Photon)

This years The 2904 event was extra special for a few reasons. It was the 10th anniversary and the final running of this race. The race organizer John Ficarra decided it would only be fitting to start the race on Brock Yates’ birthday. We would leave the Red Ball on Saturday, October 21st.

We arrived in Manhattan on Friday for the kick off dinner and start party. John had a real surprise in store for us. The start party was at Alex Roy’s Manhattan apartment. The same apartment seen in the movie “32 Hours 7 minutes.” I have to admit, this was really cool! It was poetic in that Ficarra’s disdain for the no-budget approach Roy had taken in his 31:04 record run was the lynchpin for the idea of The 2904. 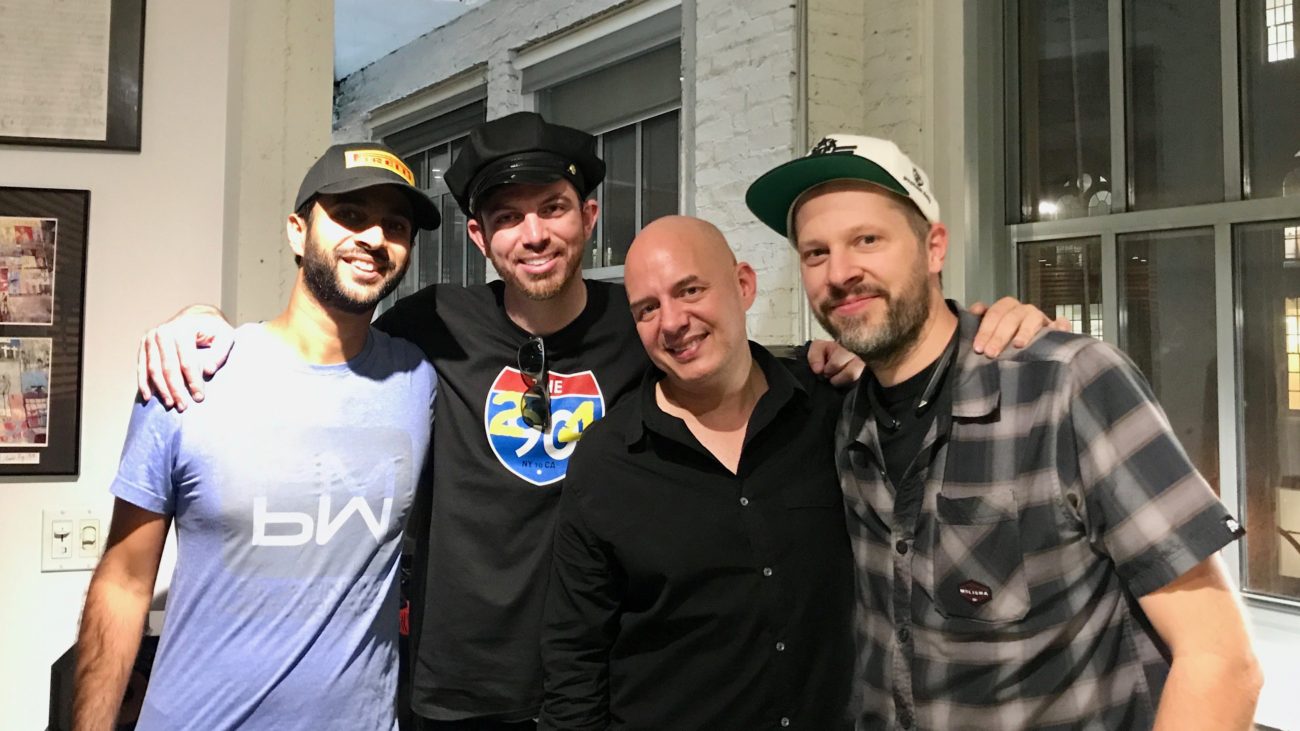 Syed, Ed Bolian, Alex Roy and I at the start party

The Underground World Of The Cannonball

When we arrived at Alex’s place it was surreal. Just a couple years ago I was on the outside, wondering if there was some sort of underground group of Interstate Scofflaws. Today I was at the start party of my 3rd Cannonball-style competition and hanging out at Alex Roy’s Manhattan apartment.

At the start party, John announced there would be start times with 15 minute intervals in between them. This was quite a relief as I had a preferred window of 7:30-9:00pm picked out and it would make a few available slots should the other participants have similar plans to mine. The window to start would be from Noon Saturday to Noon Sunday.

As John called out the first available time slots the first hour quickly filled up. Then a 2:45 slot. No one else wanted to leave until 7:00 got scooped up by The 2904 veteran Yumi and his Toyota Celica. When John called out 8 pm both Dmitry with the 9C1 Police-edition Caprice and I called out to grab the spot. John asked if we wanted to do the famous Indian leg wrestling challenge to determine who got the slot. I looked at Dmitry he shook his head and said he’d take 8:15pm. Thank goodness! I was thoroughly relieved I would not have to contend with any traffic in San Francisco unless things went really bad, which at that point it wouldn’t really matter. 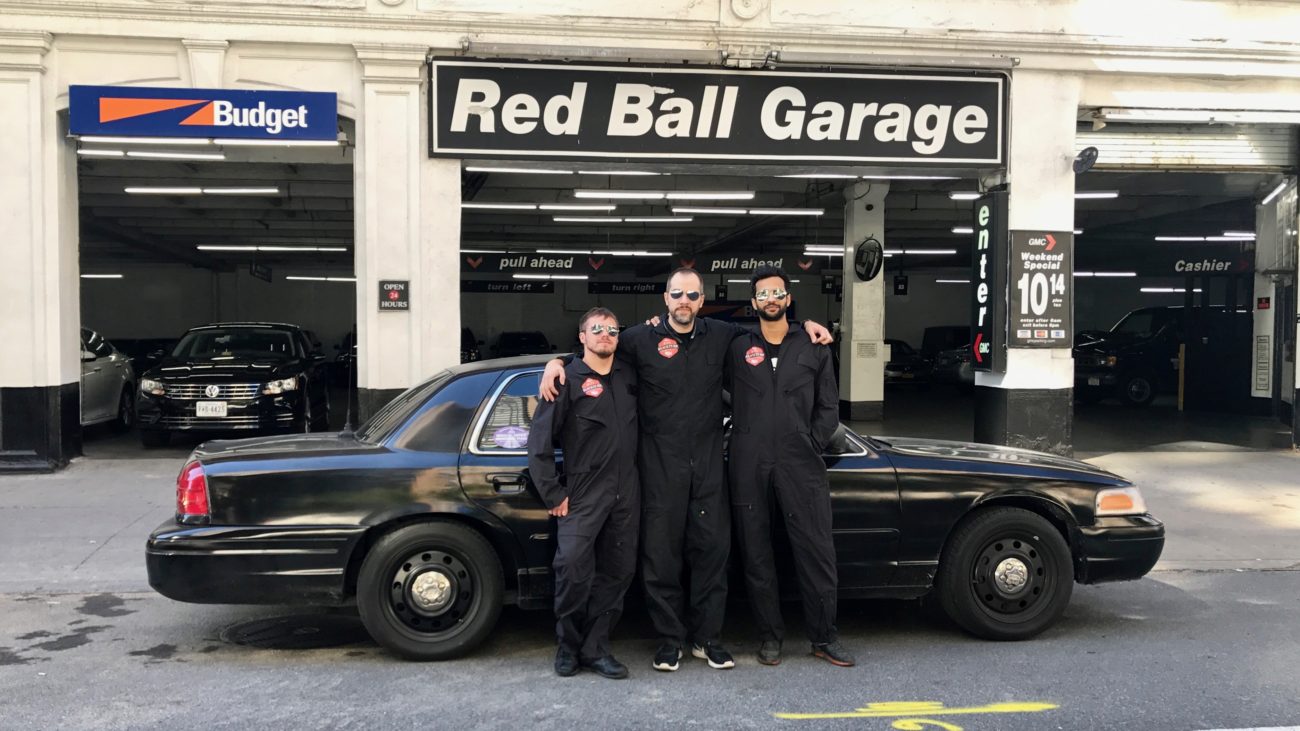