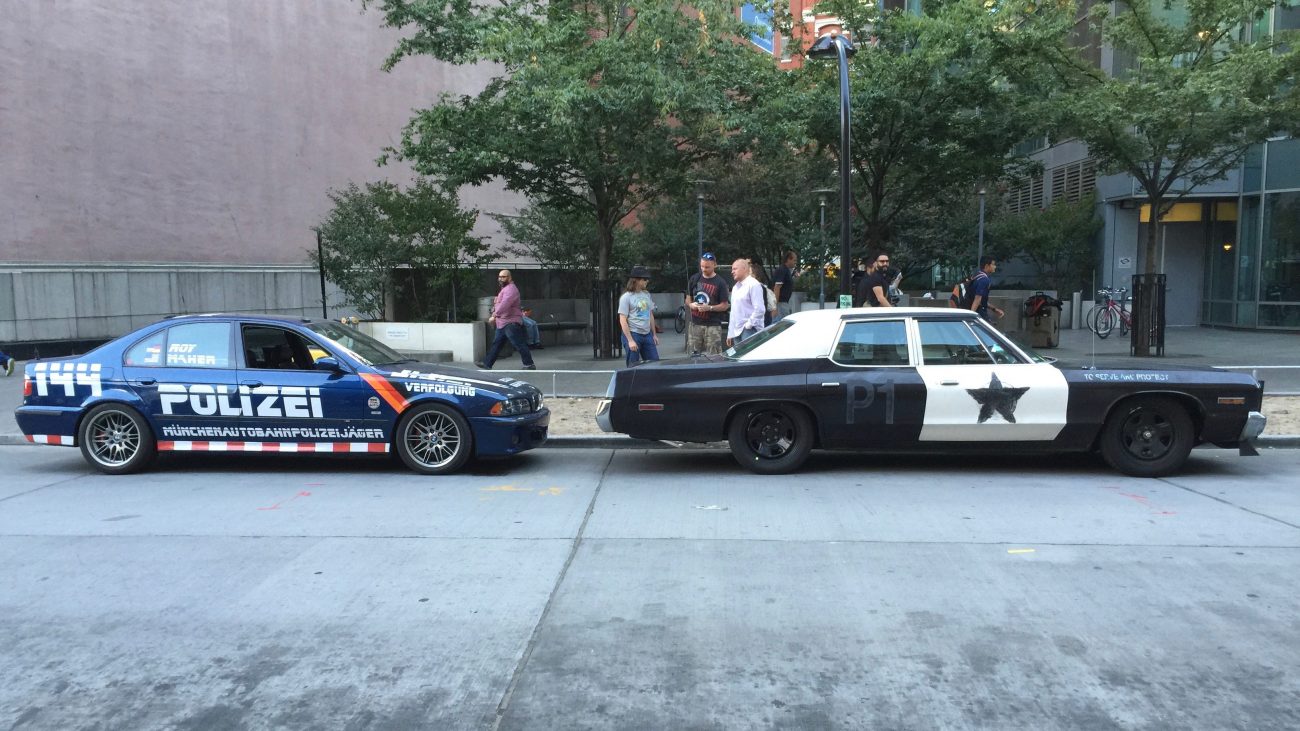 The C2C Express – A Cannonballing Mission From God

When I left off, I had just completed a last minute build on my Bluesmobile to compete in a coast to coast, Cannonball Run race for classic cars called the C2C Express. We were on a mission from God! If you missed all that, I suggest you hit rewind and get caught up!

With little to no testing, I picked up Cannonball Record Holder Ed Bolian and Forrest from O’Hare airport in Chicago. We all loaded into my Bluesmobile and headed East to Manhattan for the start of the 2016 C2C Express. 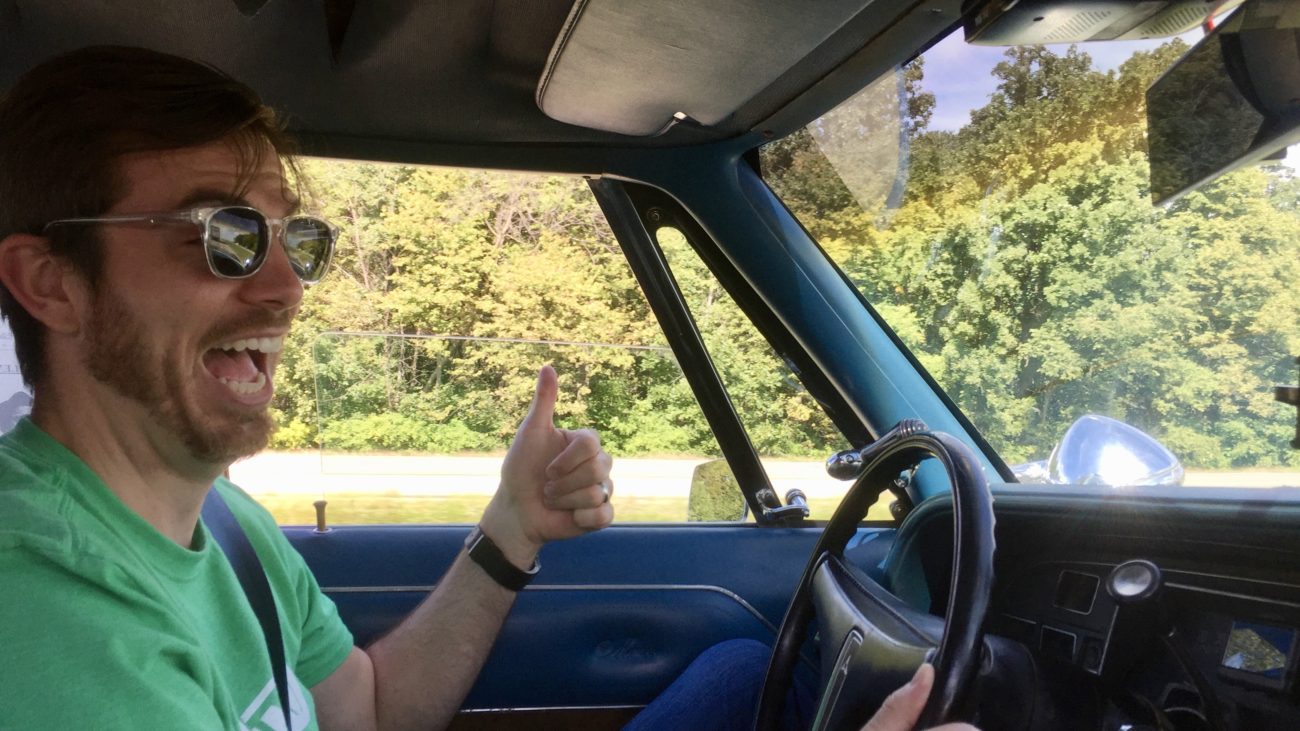 On our trip out there we began to run into some problems.  After Ed’s high speed test run in PA, the cars exhaust started to get louder and louder. Then the passenger door stopped working.  Then to top it all off, we hit a truck tire in the middle of the road which damaged the front splitter. Luck did not seem to be on our side.

That’s What Friends Are For

After making some phone calls that night, we decided we’d take the car to my friend Sean Ivey of Ivey Tune in Elizabeth NJ in the morning.  Upon arrival, Sean hooked us up with his lead tech Alvin who began repairing the splitter.  Sean got on the phone to locate an exhaust shop to replace the blown out mufflers. Forrest started fiddling with the broken door and was able to get that fixed. Within a few hours we were back in business and headed into Manhattan for Coffee with another Cannonball legend Alex Roy. 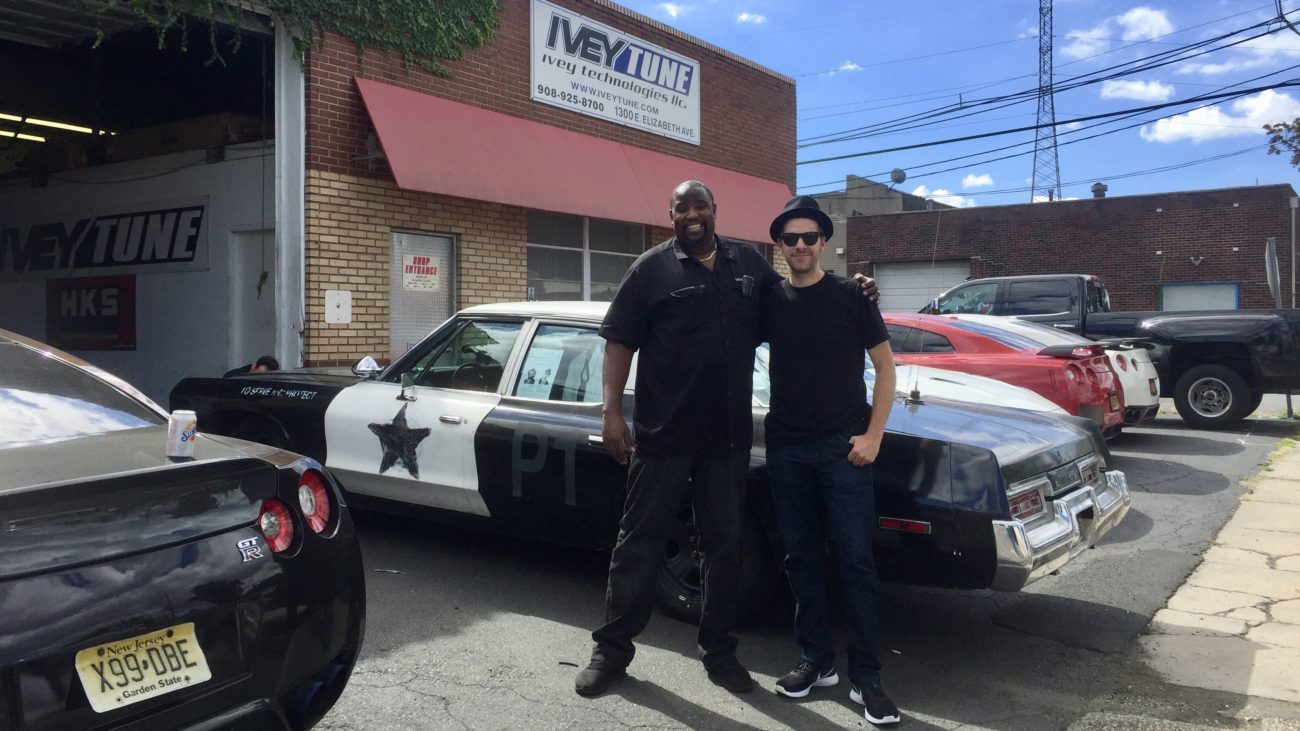 My man Sean Ivey helped us out big time! 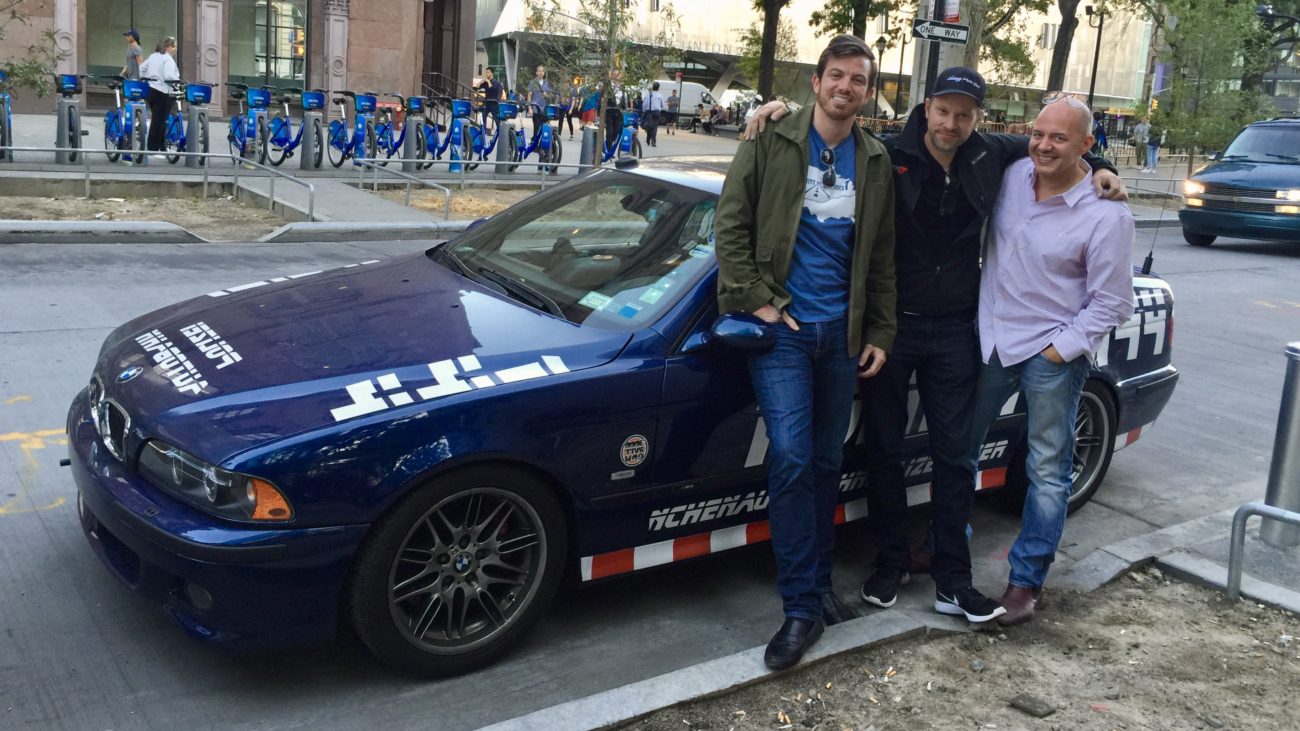 Ed, me and Alex in front of the infamous Polizei 144 BMW M5

Friday night was the pre-party at Gallaghers in Manhattan.  The private room was the same one used for the kick off of the Gumball Rally so the place had some significance for scofflaws like us.

At the party we got a final car count for the event. What was slated to have 11-12 teams became only 5-6. A couple non-Cannonball related accidents had occurred on the way to the starting grid for two teams and mechanical gremlins took out the others. One of the accidents was pretty serious and involved the wife of the event organizer. While she pleaded with him to continue on to the event he had started and organized, he stayed by her side and allowed John Ficarra of The 2904 and Ed to kind of take the reigns for the event the next day. Given the number of cars, it was decided teams could leave at any point the next day starting at midnight.

Our strategy revolved around getting out of Manhattan later in the evening so we could arrive in Los Angeles before Monday morning rush hour. This meant we would be the last team leaving. The start time was very important to me because I had a lofty goal in mind. I was planning to beat Ed’s Cannonball Competition Record of 32 hours and 5 minutes set the year prior on The 2904. We needed to maximize night driving when there is the least amount of cars on the road. The only caveat to that was what law enforcement would be lurking out there waiting for us… 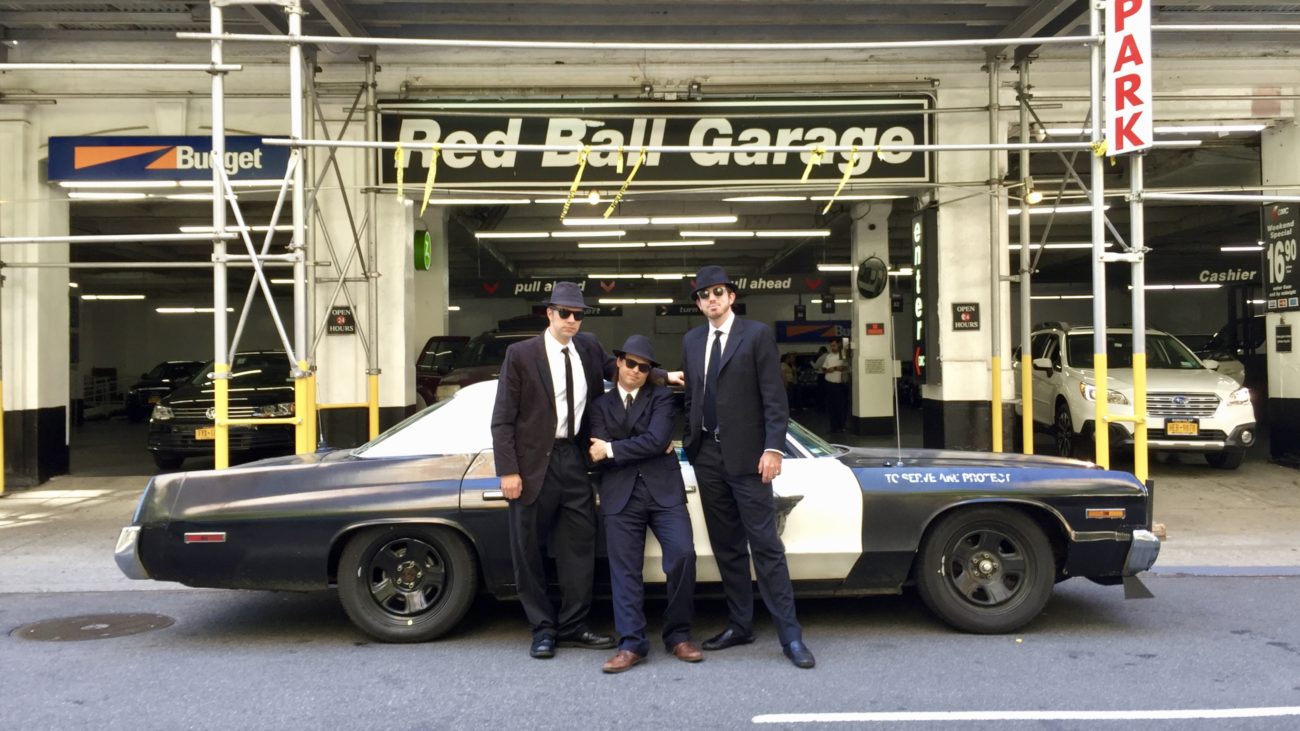 Arne, Forrest and Ed Bolian at the famed starting place of the Cannonball Run

The trip started with me in the drivers seat on Saturday September 17th, 2016.  At 8:00pm Ed punched the time clock and ran down the ramp at the Red Ball Garage in Manhattan. We were off! Within 17 minutes we were in the Lincoln tunnel and in New Jersey.  I gently weaved from lane to lane in some relatively thick Saturday evening traffic trying to ease my way through without ruffling anyone’s feathers. In a Cannonball, it’s always advisable to make your best effort to prevent people from calling the Police.

New Jersey was a little slow going due to the traffic but I pushed through into Pennsylvania where I was able to put the pedal down a little more.  Once the road opened up, I was able to get up to 132mph but we were noticing a concerning vibration at speeds over 100.  A little experimenting found the best speed to cruise at was no more than 102mph as this is where the vibration started to intensify.  It was kind of a buzz-kill to be restricted to this speed but in Cannonball anything can happen. I just hoped everything else went smooth from here on out.

Ed Gets His First Cannonball Citation

At roughly the 400 mile mark we decided to switch drivers.  Ed hopped behind the wheel and continued down I-76 Westbound at a good pace.  Just 20 miles into his drive though we ran into a tricky speed trap entering a construction zone.  The radar detector was going off but it seemed to be another radar speed sign in the distance.  Forrest quickly identified it as such with the binoculars and Ed got back on the throttle. It was at this exact moment we all realized a radar signal was also coming from a Police car as our headlights revealed the reflective markings of a Pensylvanina State Trooper!  As we passed by with Ed’s foot firmly on the brakes, we knew we were in trouble.  The Trooper quickly pulled out and turned on his lights to pull us over. CRAP!

He had gotten us at 90mph in a 55 mph work zone. 12 minutes later he handed Ed a ticket for 80 mph to save him from a really hefty fine.  No mention of why we were dressed as the Blues Brothers or why our dash board was full of screens and electronics though… 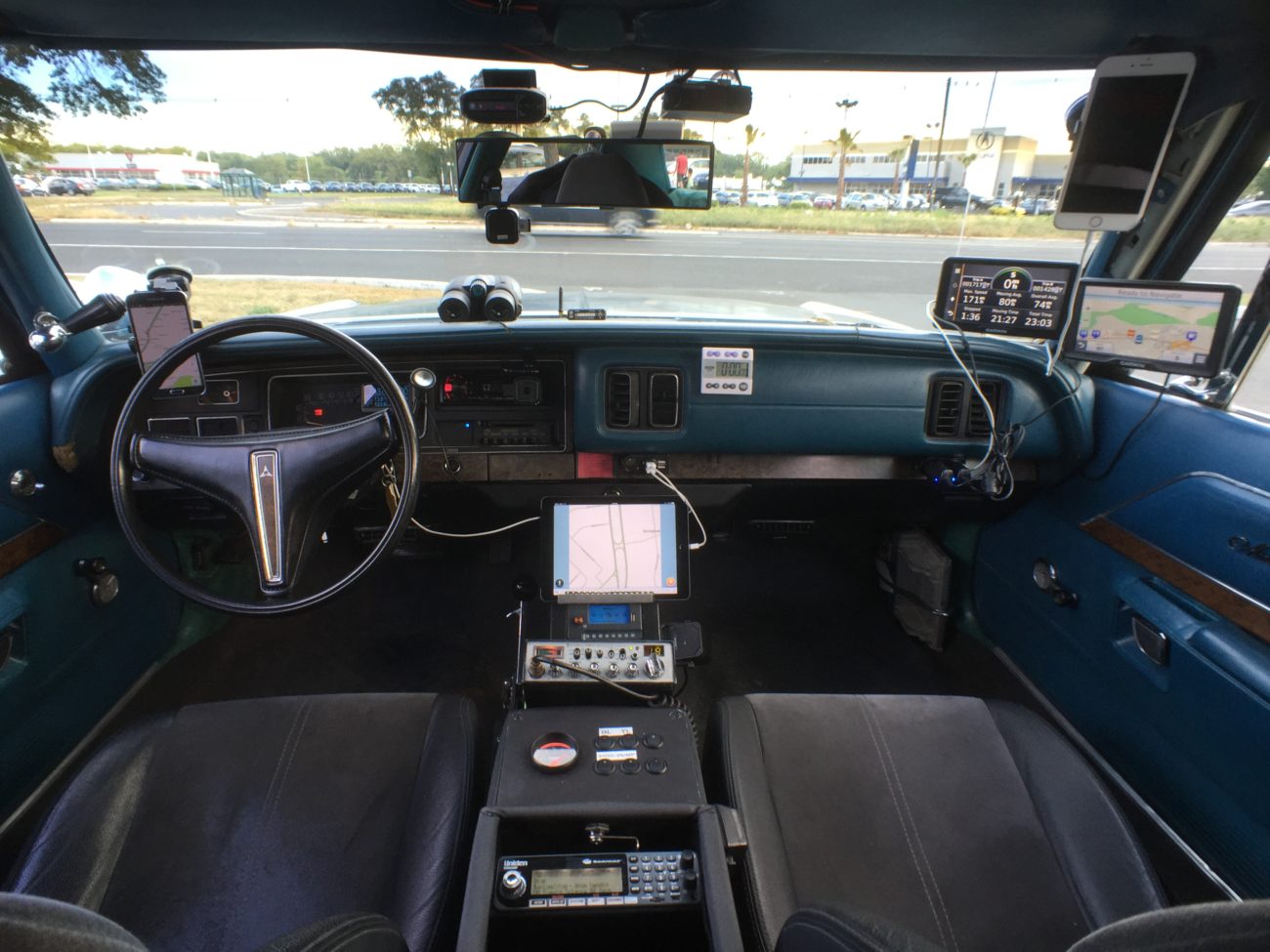 The Police Countermeasures make the Bluesmobile more like NASA Mission Control. How on earth was this not questioned?

Ed eased away from the traffic stop and held the speed limit.  The Cannonballing response to anything that slows you down must be to accelerate but when you are in middle-of-nowhere PA in a very conspicuous car, this is not an option. A second citation will not be lenient and incarceration could follow. Knowing he could not press on at a good pace for the rest of the state, we pulled over and I took the wheel again to pick up the pace!

Speed was not our only unexpected limitation.  Our fuel economy was about 40-50% worse than I expected meaning 2 additional stops I wasn’t planning for. While my Crown Vic from The 2904 last year had gotten 14mpg, the Bluesmobile was getting less than 10. I had overestimated the efficiency of the engine and underestimated the effects of far worse aerodynamics.

As we crossed into Ohio I kept the speed around 100mph. I-70 was a ghost town and it was smooth sailing despite some light rain. I was closing in on Chris and his BMW M5 who was running reconnaissance ahead of us.  I soon passed him and we wove our way through the state until I needed gas around 1:30am.

A Near Disaster On Our First Gas Stop

As I came down the off ramp to the gas station, the Bluesmobile hit a slick patch near the stop sign at the end of the ramp. Under the heavy braking, the front tires locked up and I started sliding directly at the stop sign. I eased off the brakes some to regain traction and started assessing whether to try to stay on the road and save it, or go off the road, through the dirt/ditch and around the other side of the sign. I could see Ed brace himself as he said, “Ok, here we go,” as we slid toward an obstacle that would imminently create an inconvenient low speed crash. Thankfully the tires regained grip at the nick of time and I was able to keep all 4 tires on the road. Phew!

The fuel stops during a Cannonball are kind of like a fire drill.  One guy slides a credit card in one side of the gas pump, the other guy does the same on the opposite side.  One pump goes into the factory gas fill, the other into the fuel cell in the trunk. While this is happening the guy in the back seat runs to the bathroom, followed up by the driver and once someone gets back to the car the last guy runs in for a bathroom break. 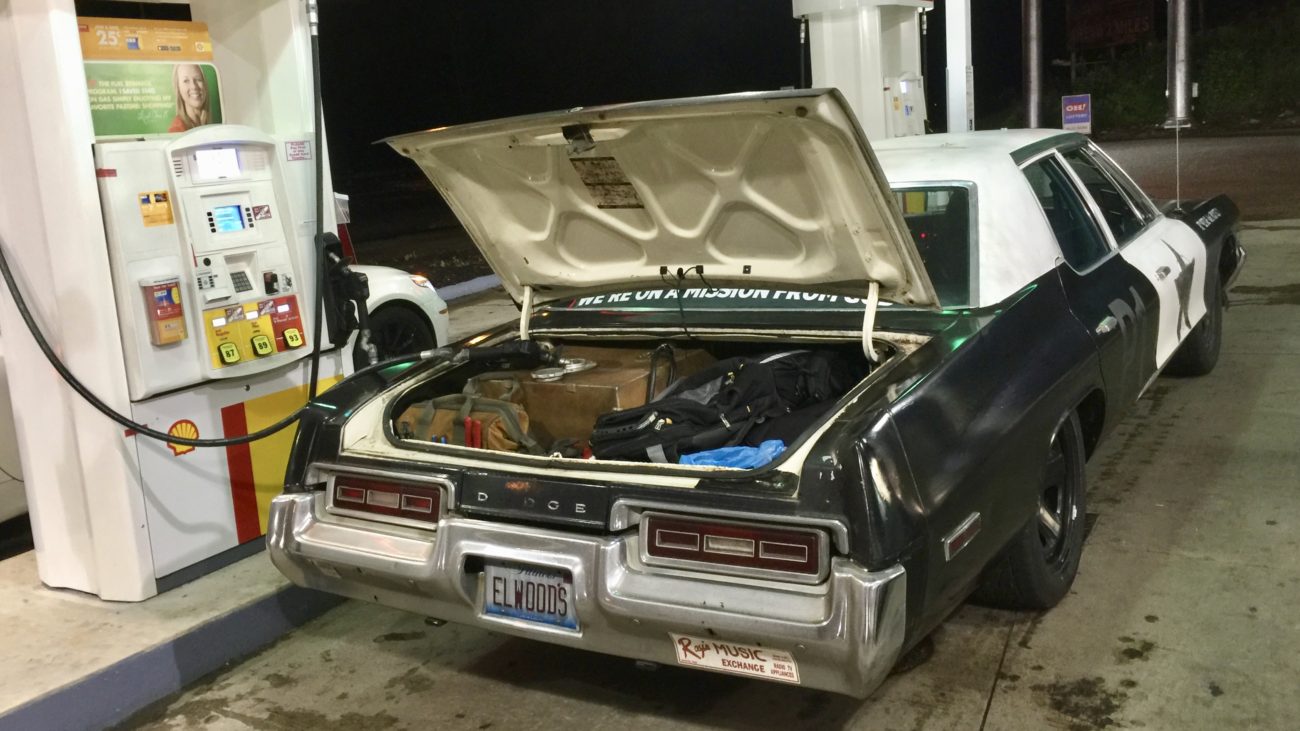 Stopped On The Interstate

With Ed back behind the wheel now that we were out of Pennsylvania, he put the hammer down heading West for Indiana. We were making good time minus some one-lane road construction. Things were looking good until we started to hit some fog around 4am. This trip was turning into a nightmare. I had so badly wanted to break the 32 hour barrier. Slowly Ed was scrubbing off speed to accommodate visibility and then total disaster struck. Traffic came to a complete standstill on I-70 at 4:30am. 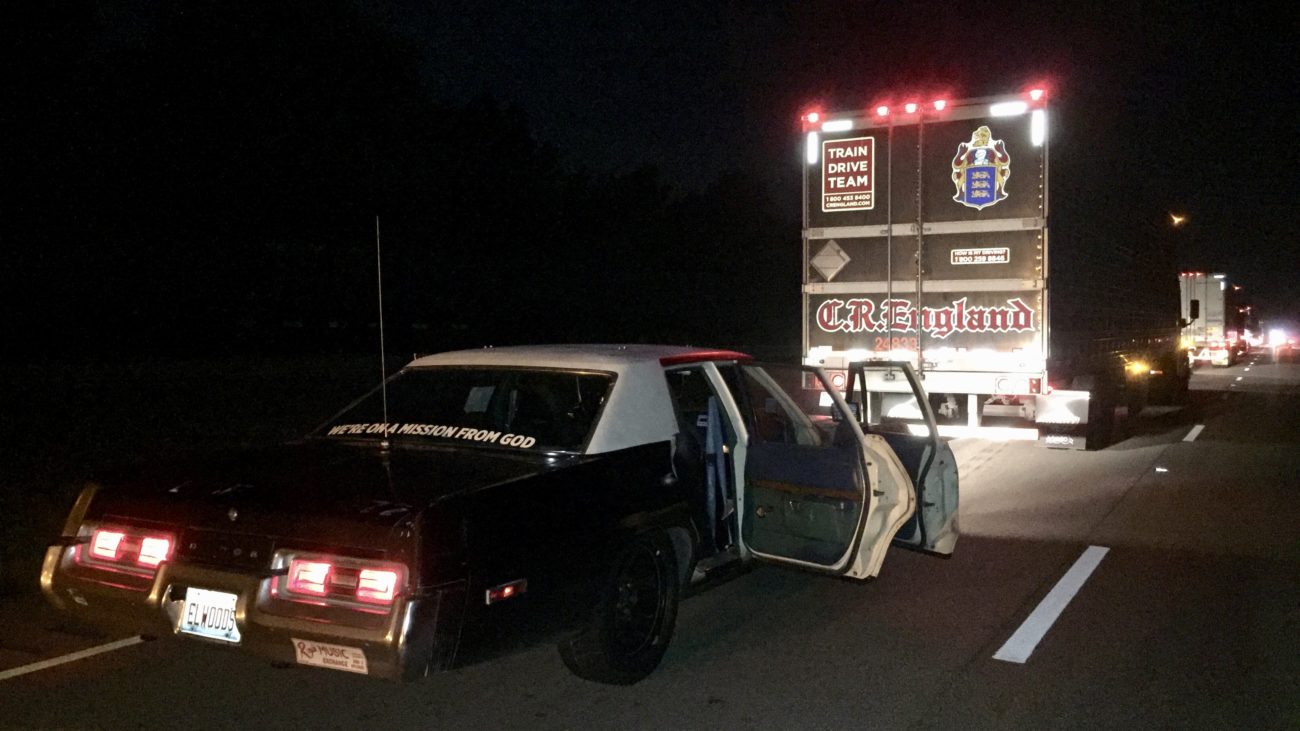 I was heartbroken.  My dreams of beating the Cannonball Competition Record were shattered. Between the limited speeds we could sustain and the added fuel stops, the hopes of coming in under 32 hours were long gone. I was seriously contemplating just heading home. I was considering how I could break it to Ed an Forrest. Maybe I’d just pay for their flights home from Chicago…

What will the Blues Brothers do? Is Forrest even going to get his chance to drive? Find out next week on Arne’s Antics! 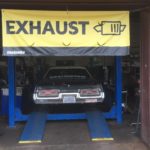 Getting some new mufflers 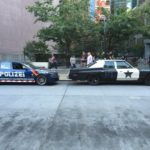 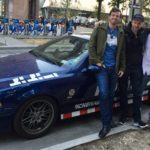 Ed, me and Alex in front of the infamous Polizei 144 BMW M5 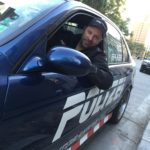 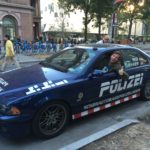 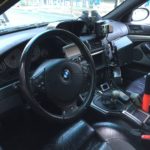 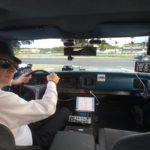 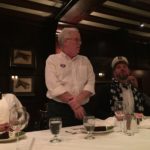 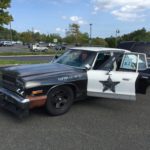 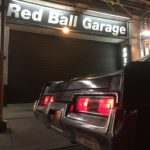 My Bluesmobile at the Red Ball Garage in Manhattan 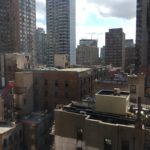 The top of the Red Ball Garage seen from our hotel 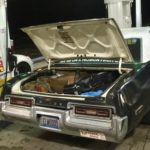 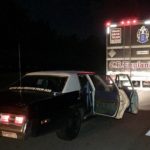