The Quest For A World Record In A Turbocharged Hearse

I have always dreamt of strange projects. At the time I was Vice President of AMS Performance so you’d think I would have built a 1000+ horse power GT-R… That would be far too normal for me. Instead I dreamt of something different, something that would leave a lasting impression. Like, say, an A-Team Van with a white Mr. T. 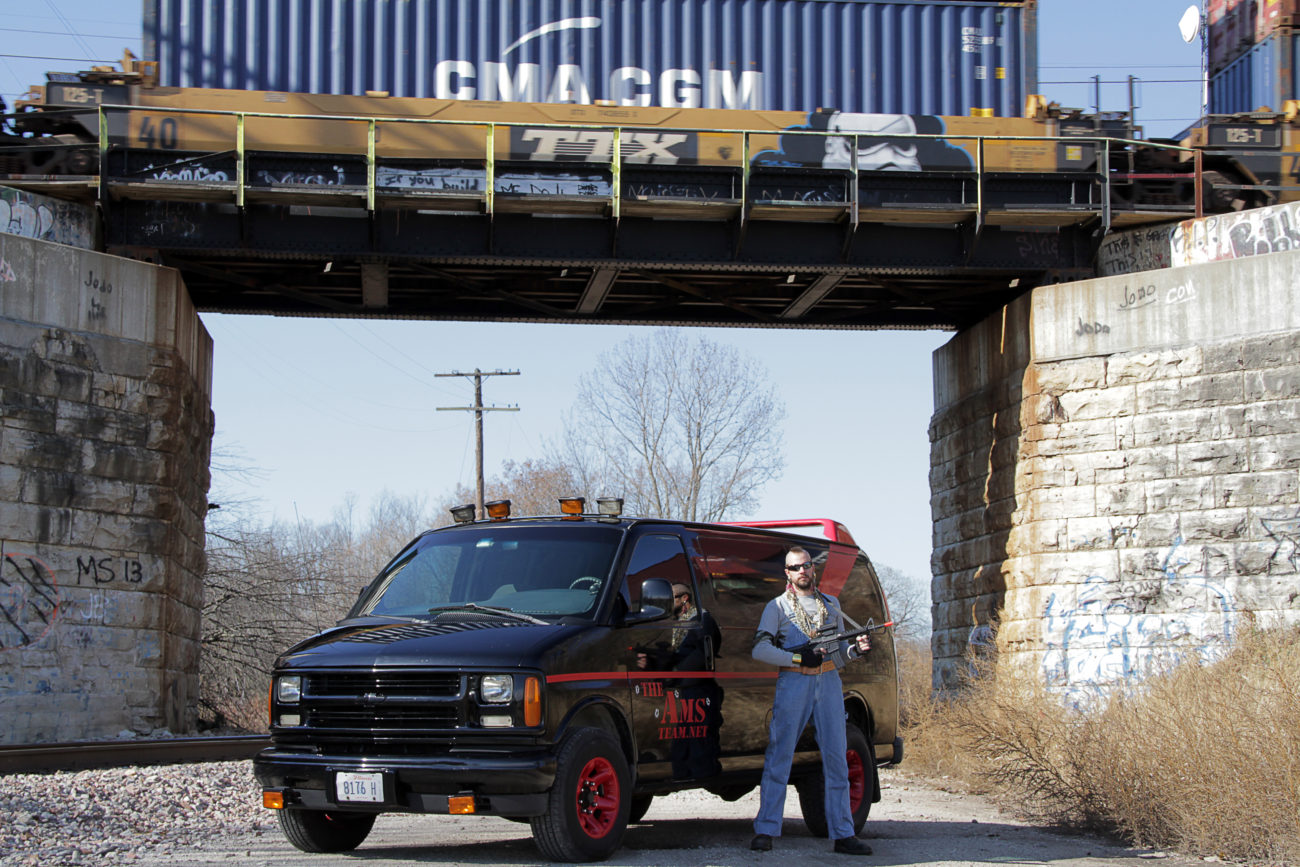 The Turbo Hearse Idea Is Born

In 2008 I decided I wanted a mainstream world record instead of just a record with some particular platform like the EVO or GT-R. I came up with either building the world’s fastest Limo or Hearse. When I looked up who had the fastest Limo, I found some sort of stretched Ferrari that went 175mph so that was out. I then decided on a Hearse and to make it a tribute to my favorite Heavy Metal band Iron Maiden. I figured if I did that maybe I could somehow get the bands attention and meet them someday.

When I looked into who had the world’s fastest Hearse I was pretty surprised that the record was only a 13.72 @ 98 mph. This was recorded by the Guinness Book of World Records in 2005 by a Hearse named “Undead” from Australia. Further searching found no other contenders. I knew this would be easy to beat considering I built my old 1999 Diesel Ford Van to run 13.4’s at 100mph and it weighed almost 7000lbs.

I didn’t want the standard old Cadillac Hearse. I wanted something that looked “sporty” so I chose the late model Chevy Caprice or Buick Roadmaster to search for. It had to be black with a red interior because to me that is the classic Hearse look and with this body style it could be made to look like an Impala SS. It actually took a while to find one because it is difficult to find the black/red color combination. Who knew.

The first Hearse I found in my color combo was a Buick Roadmaster in Indiana. It wasn’t ideal because it was stretched 18″ making it a little heavier than I wanted and it was from Indiana so it had a little rust underneath, but I was getting impatient.

On a cold and rainy Friday night in April I took a couple friends to drive me down to get it. We ended up having to help the guy move the casket that was inside it into another one of his Hearses before I could take it. It was creepy and weird to say the least. Then we got really lost in Indiana trying to find a strip club. It was an interesting night… 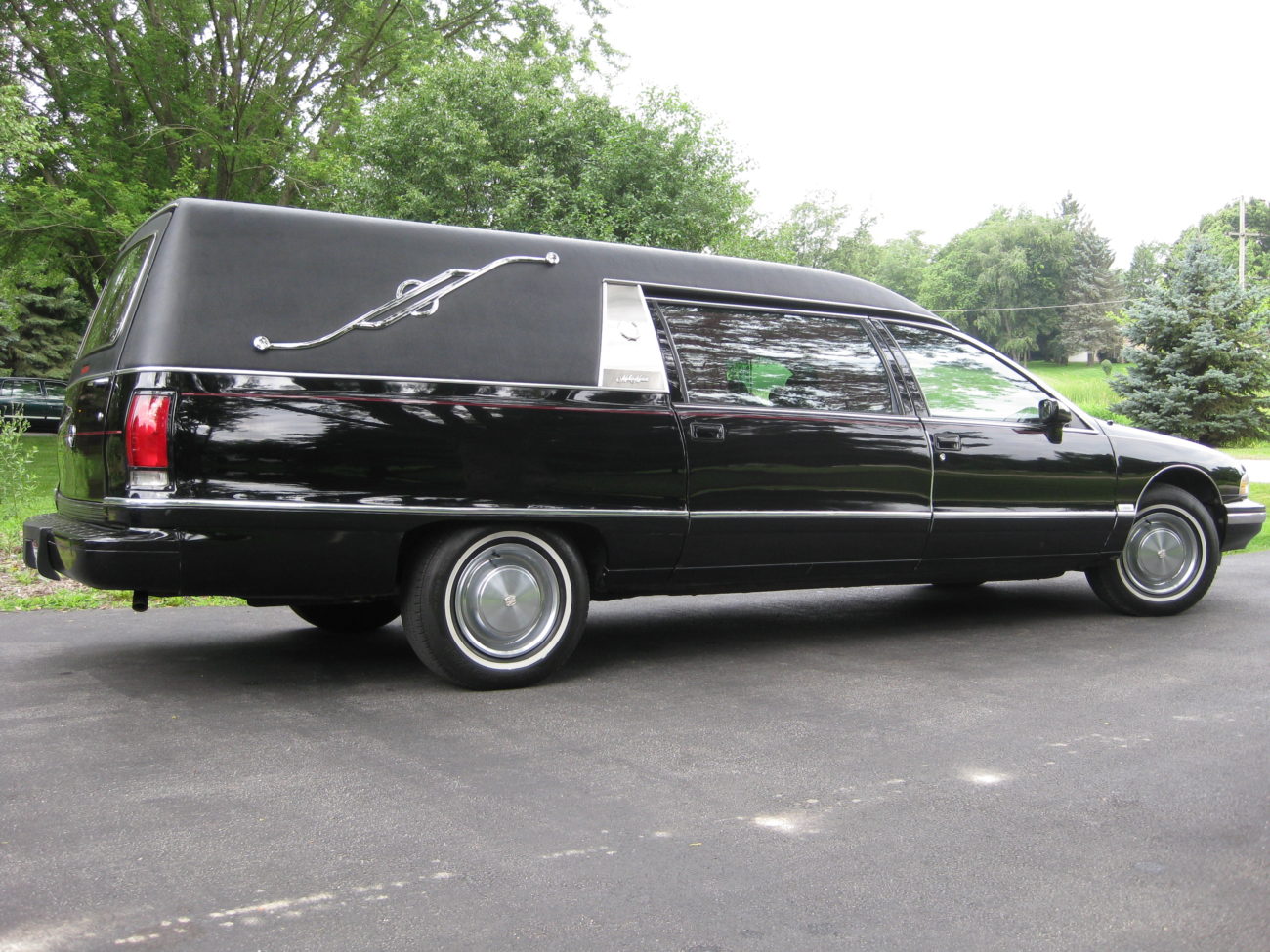 Then There Were Two Hearses

So what happens when you compromise and buy a car you are not 100% in love with? Naturally you find the EXACT one you wanted 2 weeks later.

What I found was a 1996 Chevy Caprice converted by Superior Coaches. It was from Knoxville Tennessee so it was rust free and just de-commissioned. It was also shorter, lighter and a Chevy so making it look like an Impala SS would be easier since it was already a Caprice. I flew down to Tennessee and drove it back. I also slept inside it at a Truck Stop on the way back to Chicago but that is a story for another time.

The first thing I did to the Hearse was add an Impala SS grill and 4″ cowl induction hood. My Ese, “El Mago”, air brushed a sick Iron Maiden mural on the hood. He said I was officially the first gringo he knew to have a mural on his hood. I was honored!

I cut the springs and cruised it around on some hideous 20″ wheels I had acquired somewhere or another for the first year while I figured out what I wanted to do for the drivetrain. Oh, and now I also had to sell the first Roadmaster Hearse. 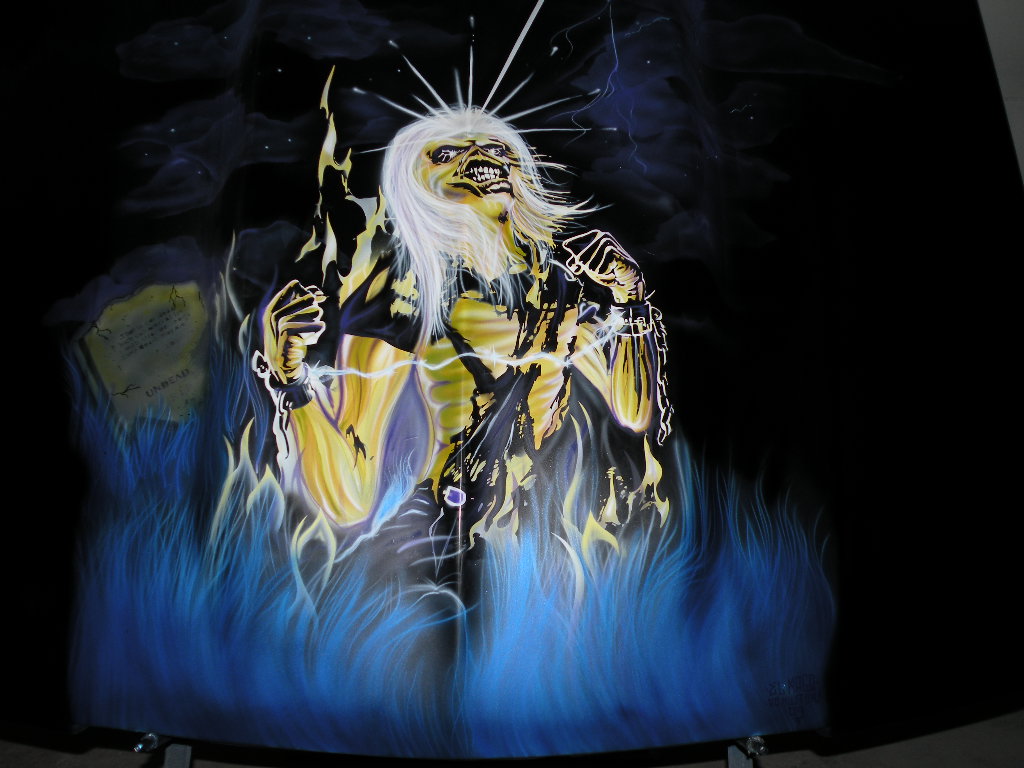 Iron Maiden mural from the “Live After Death” album 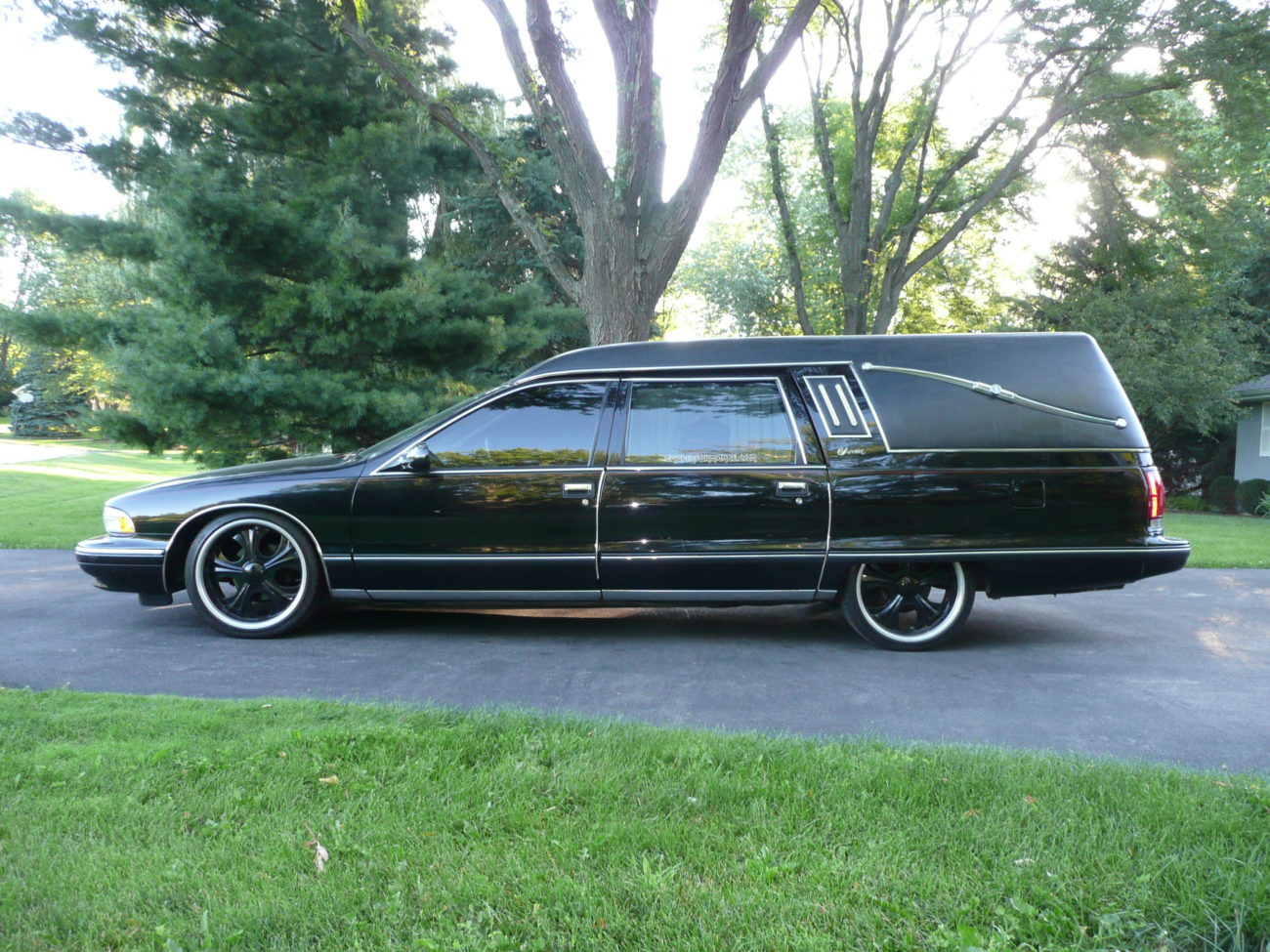 At first thought I wanted to use a Duramax diesel to power it. At the time I was really interested in the up and coming diesel performance market. Technology had come along way since the 7.3 Powerstroke I had modded to power my old 13 second E350 Van in 2006. 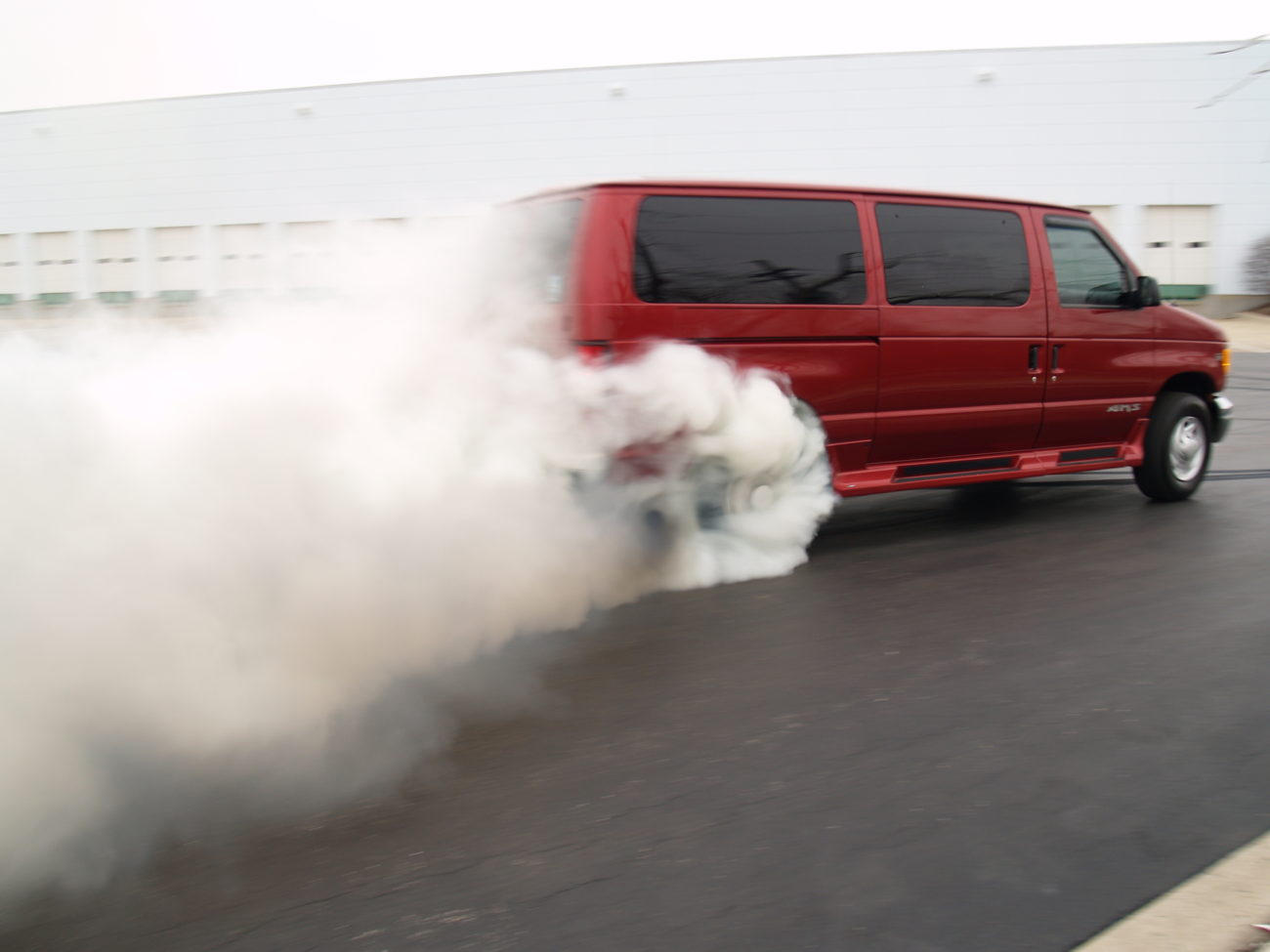 After buying a used Duramax diesel off eBay I began to realize that an engine this heavy would really limit what I could do with the Hearse. Weighing in at 840 lbs., this engine would not allow me to road race the Hearse limiting me to straight line racing only. Looking back it was kind of silly to ever consider putting this car on a road course but that was what changed my mind. Don’t judge me.

What seemed to make more sense was an LS based Chevy V-8 with a GT42R turbo I had hanging around. Even back in 2009 this swap was really common and I don’t like to normal things usually but if you can’t beat em’, join em’.

With a new plan in place, I sourced an LQ4 6.0L Chevy V-8 complete with 4L80 transmission and wire harness from a 2006 Chevy Express 3500 Van. It ended up being a better choice and far less expensive than my original idea.

Since that time, Madness has been through a few turbo configurations and stages in the build before ending up with the twin Garrett turbos it has now. Stay tuned as I recount the build and look back at the milestones of Madness, The World’s Quickest and Fastest Hearse, in future articles of Arne’s Antics.