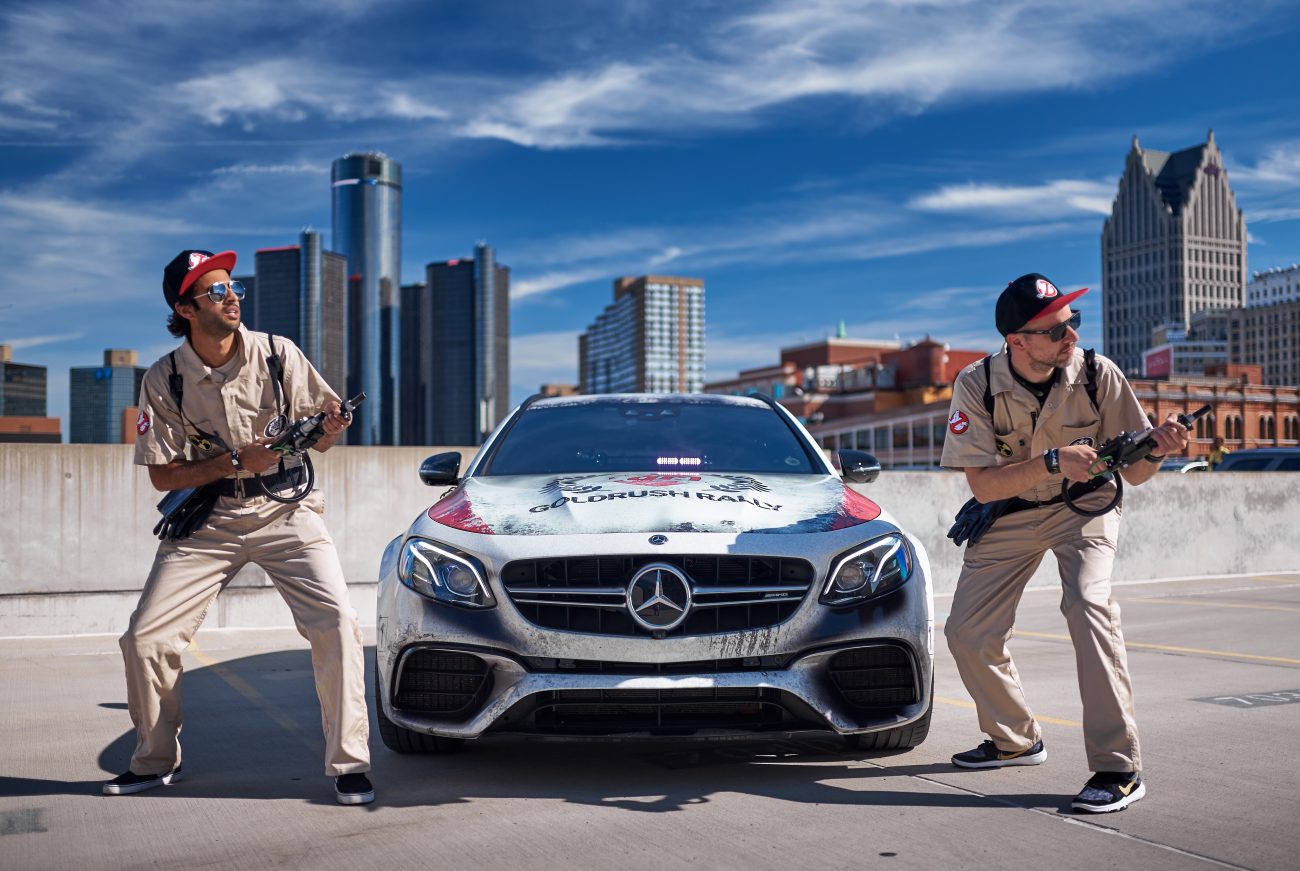 Ghostbusters Take On The Promised One – goldRush Rally GRX

The driving on day 2 was much better. Scenic roads carving through PA were amazing. Ben Chen had dropped off the CLK GT-R and was now in his usual goldRush car, the Panda Bugatti Veyron SS. How basic.

We saw he was up ahead on the map of our JoinR app so we picked up the pace in the E63 to catch him. Once we did we saw he was actually rolling with ANOTHER Veyron. This one from Top Gear Porsche in New Jersey. We rolled with them for the rest of the way to our lunch stop. Pretty epic to roll with 2 Bugs! 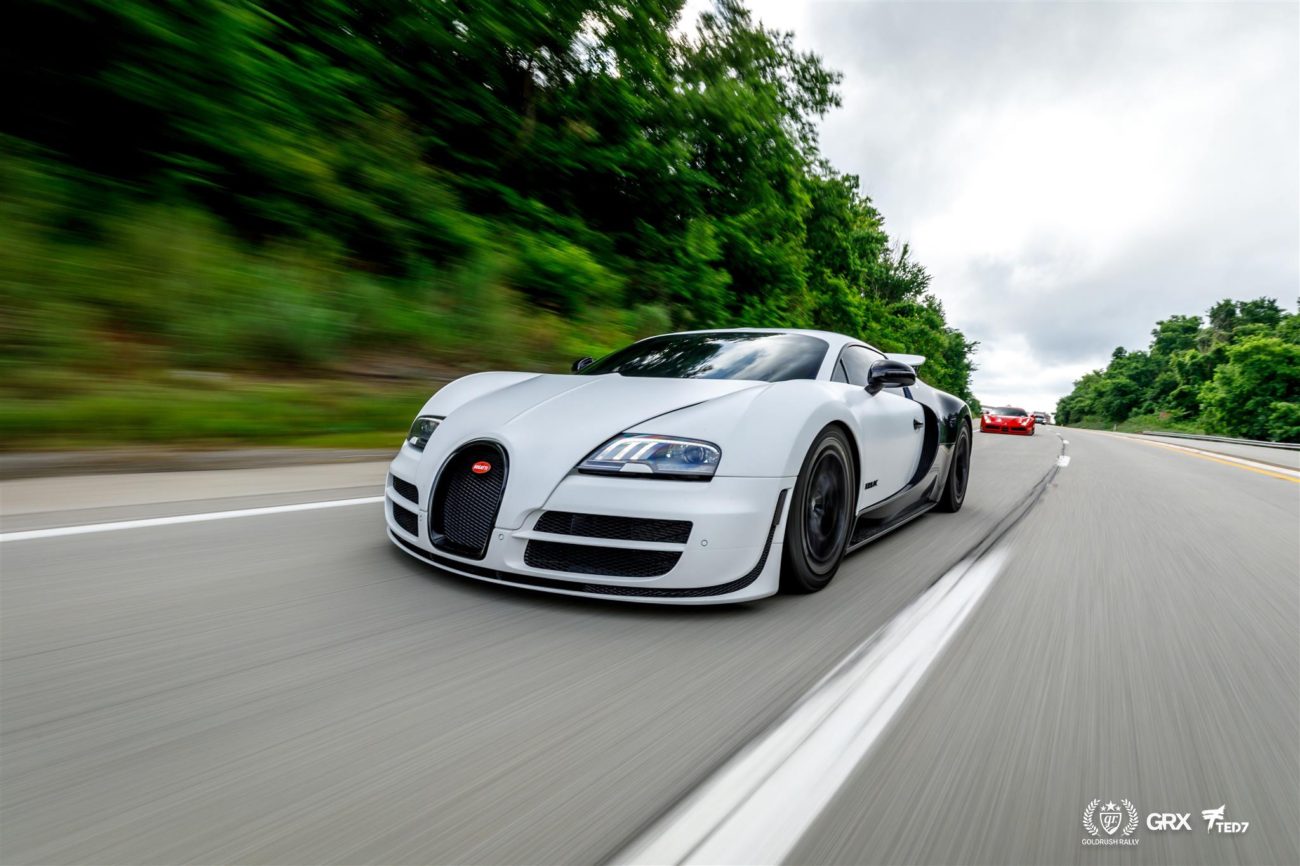 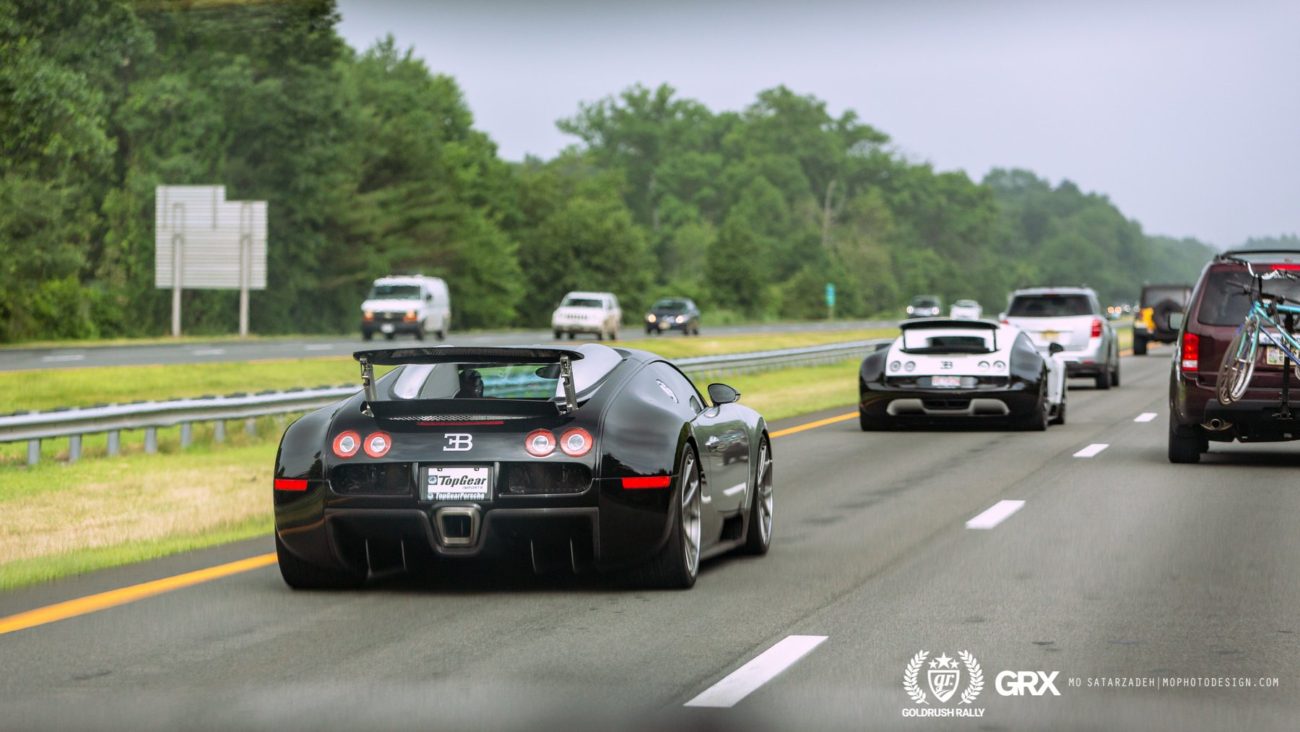 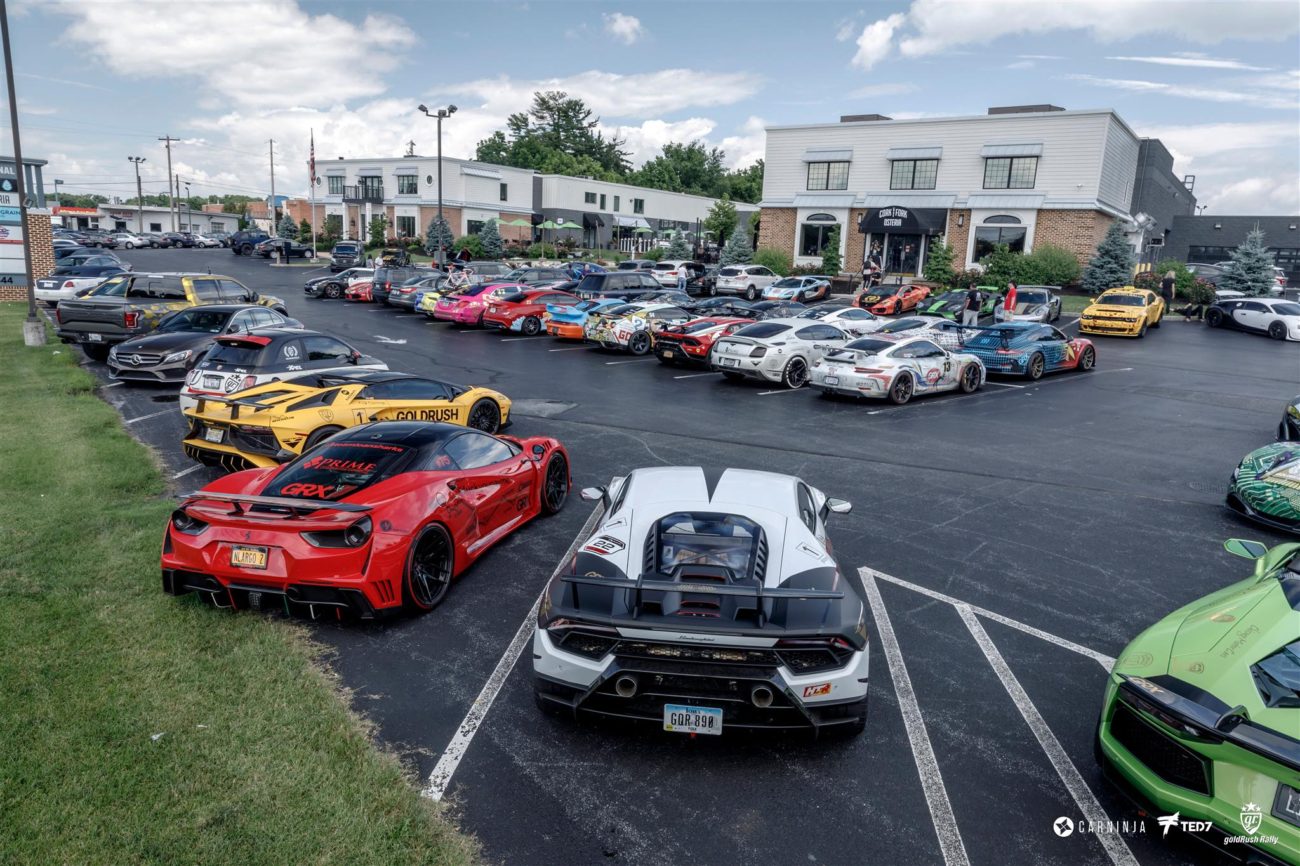 When we reached the Nemacolin Woodlands Resort the staff directed us to park on the private runway. Naturally some shenanigans occurred! 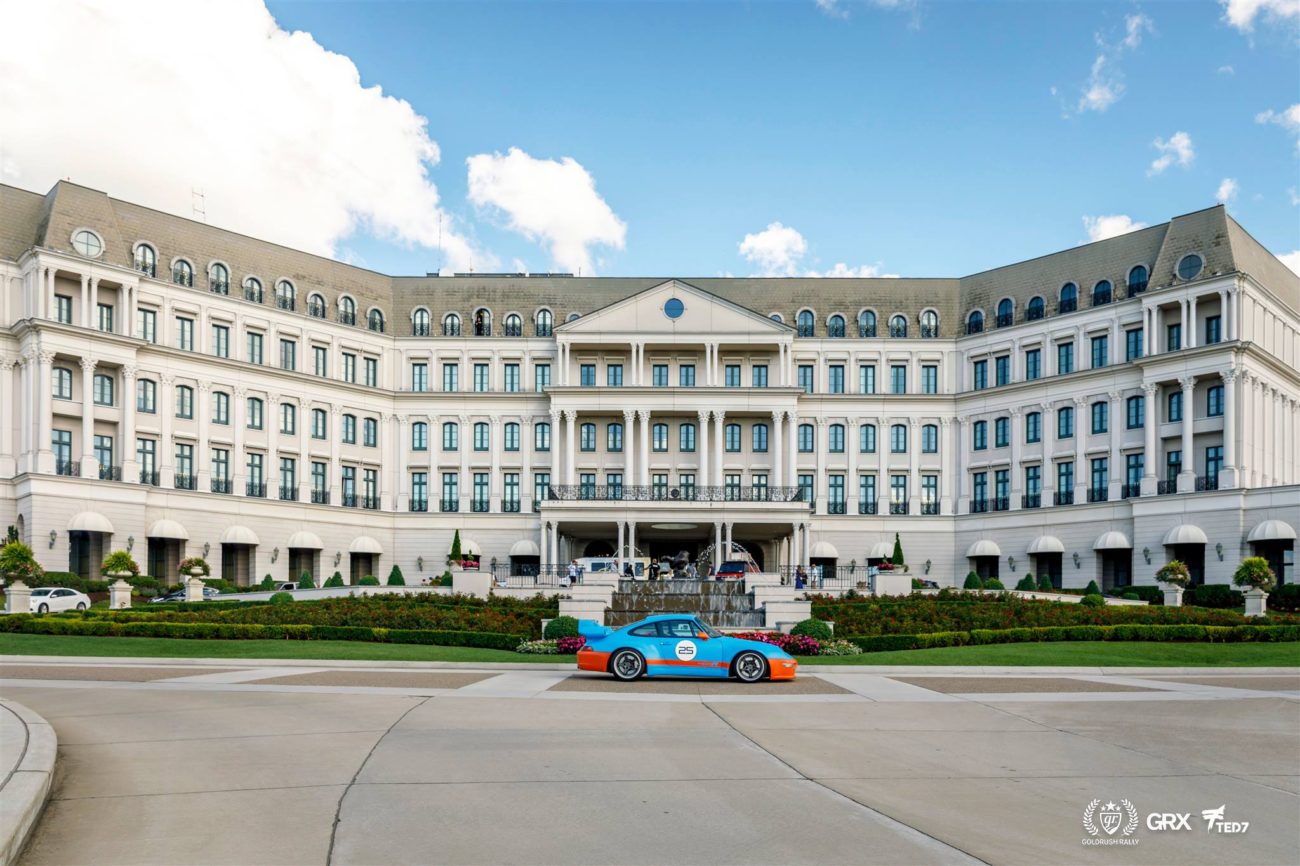 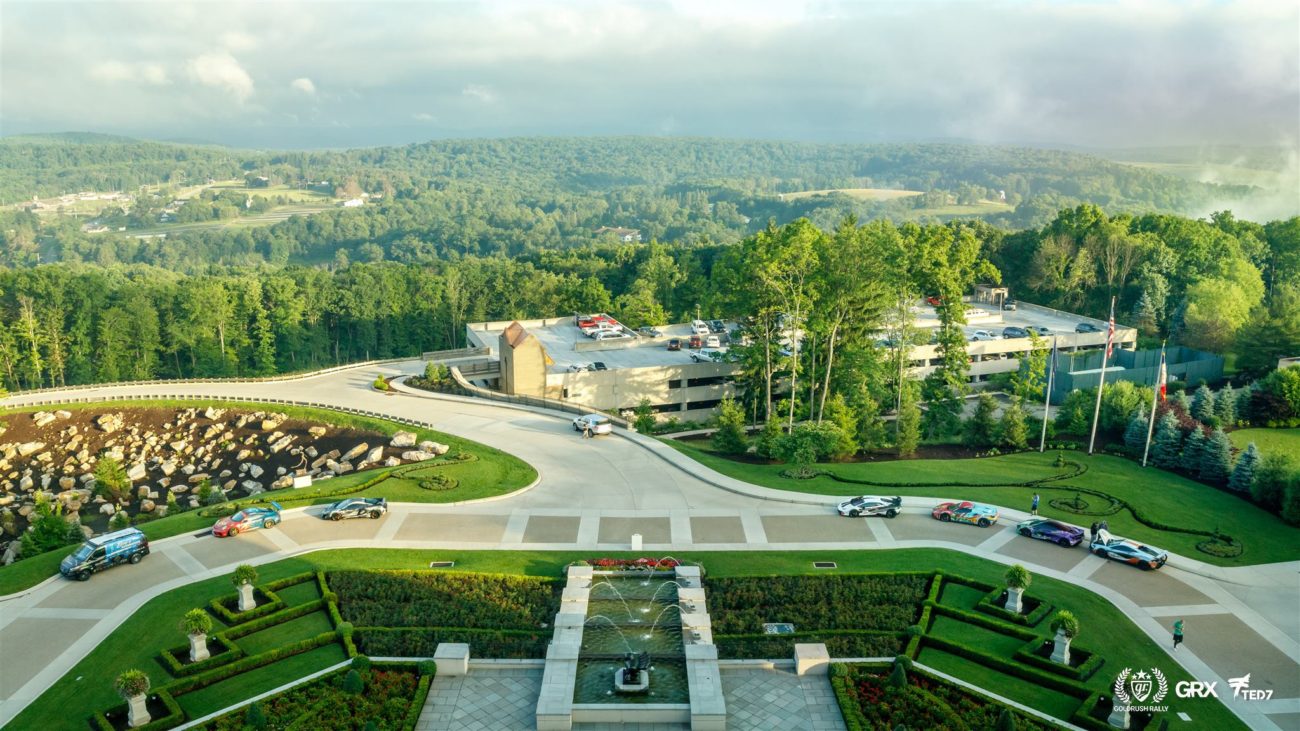 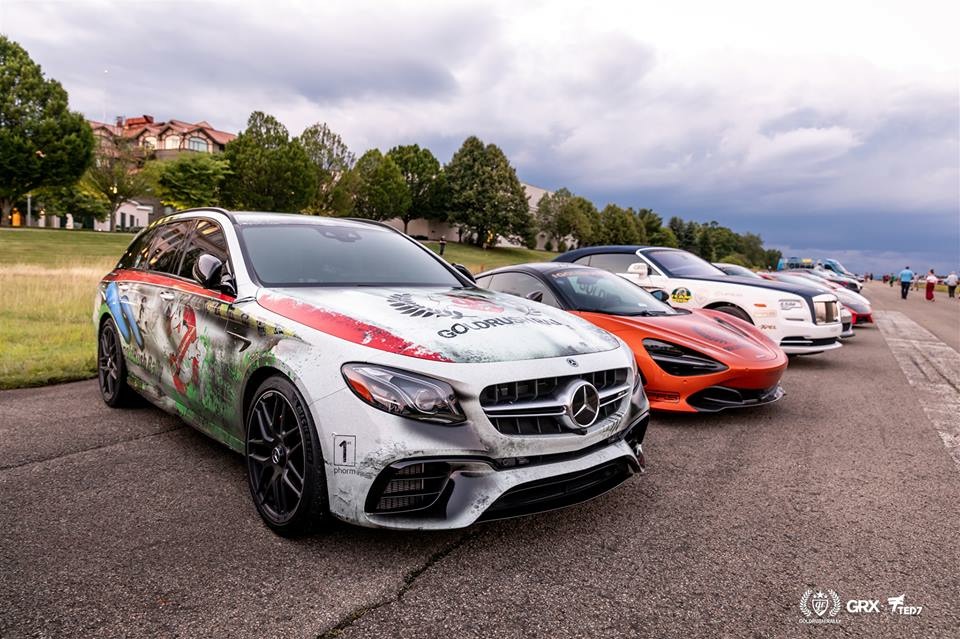 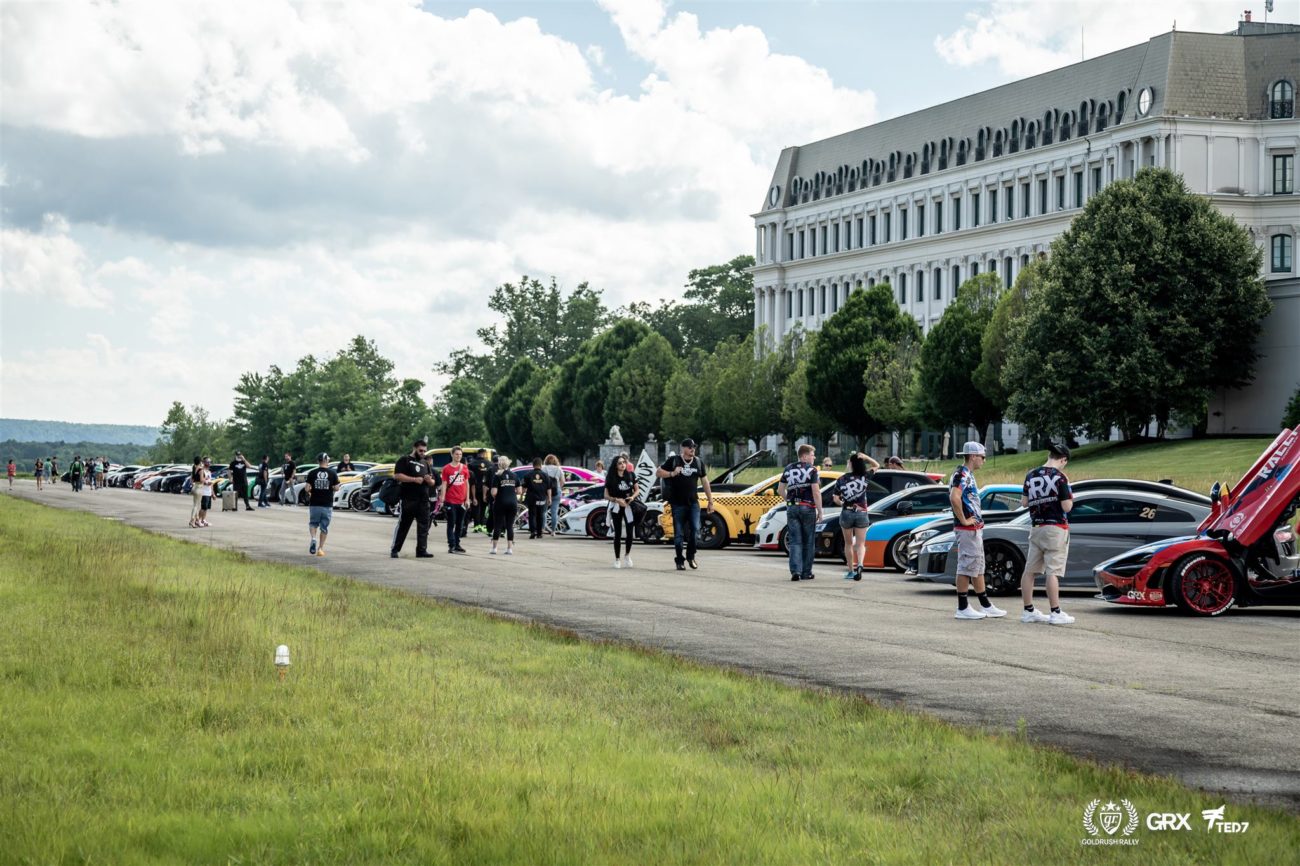 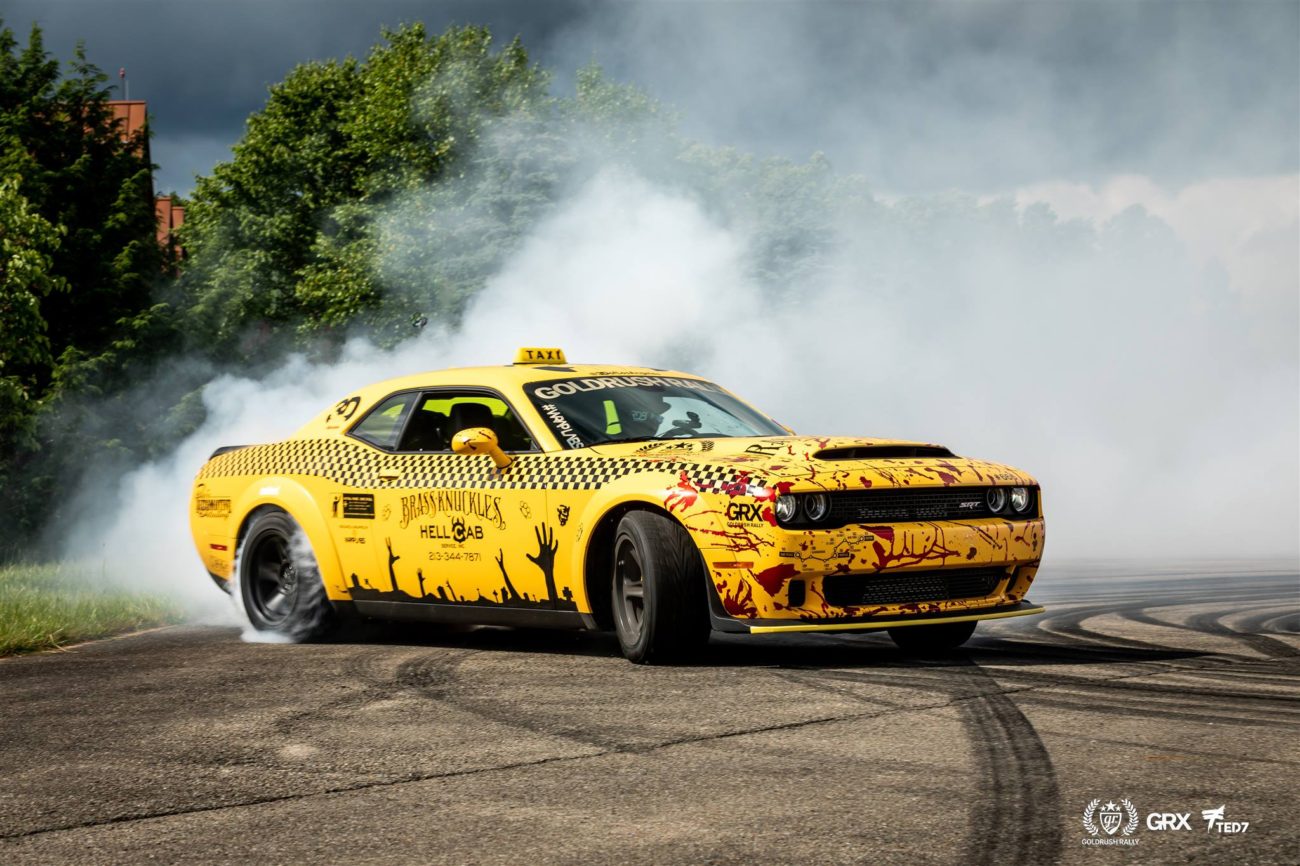 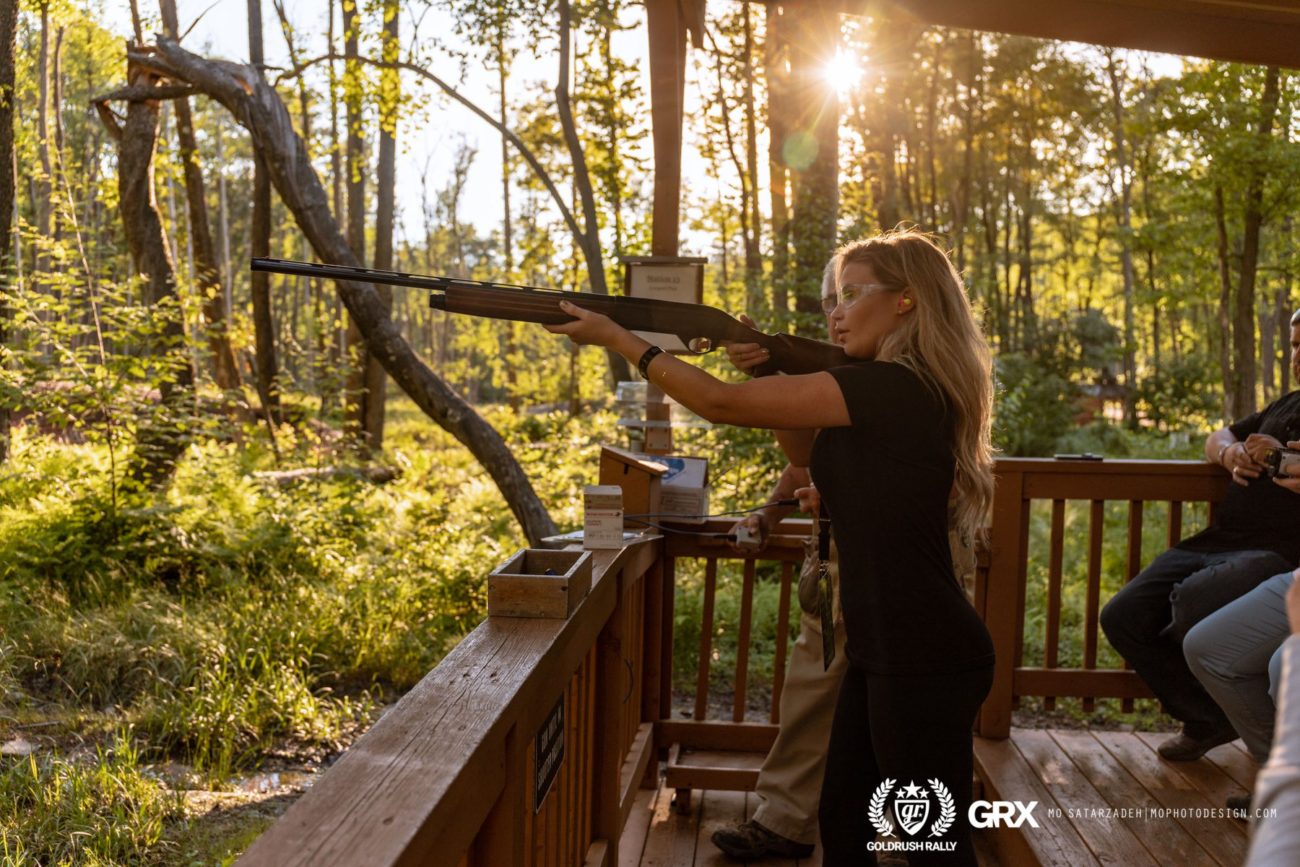 We headed out early enroute to M1 Concourse in Michigan. Syed was responsible for setting up everything in Detroit so we wanted to make sure things were ready. On our way out I drove through the rest of PA and into Ohio, the worst state for speeding. We had smooth sailing until we got to the West end of Ohio. 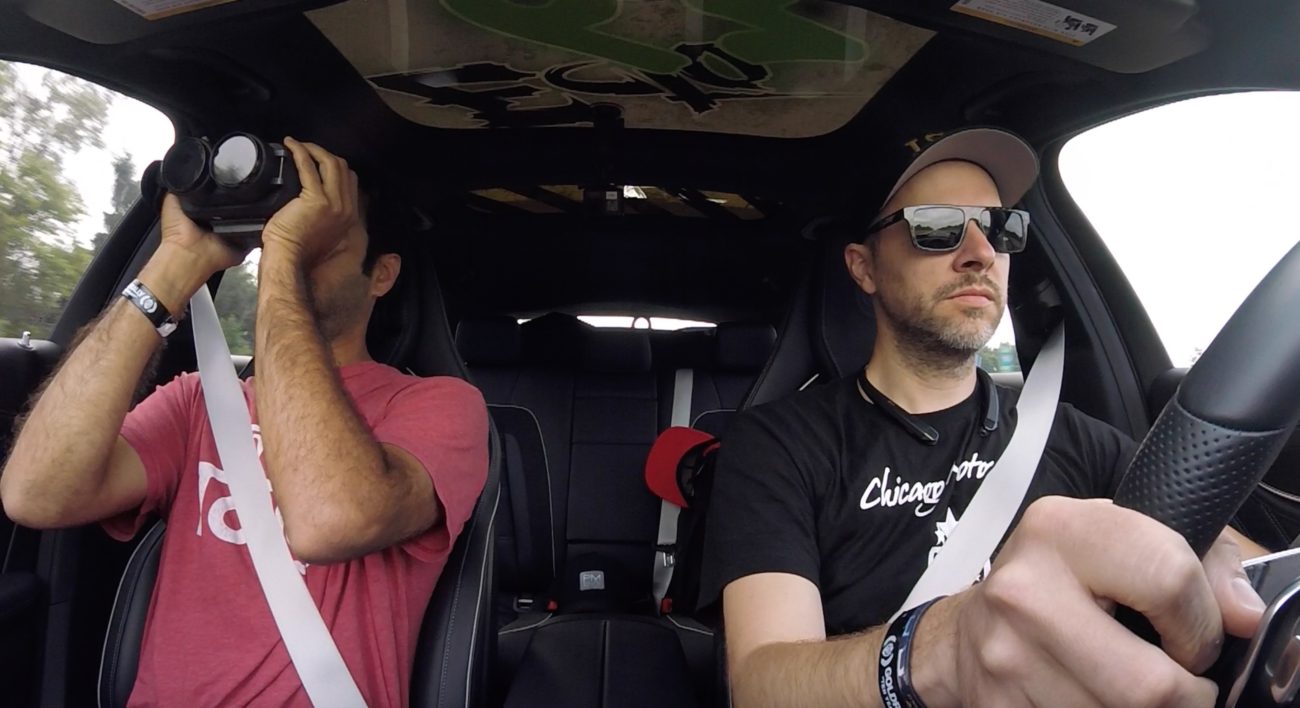 Westbound and hammer down in Ohio 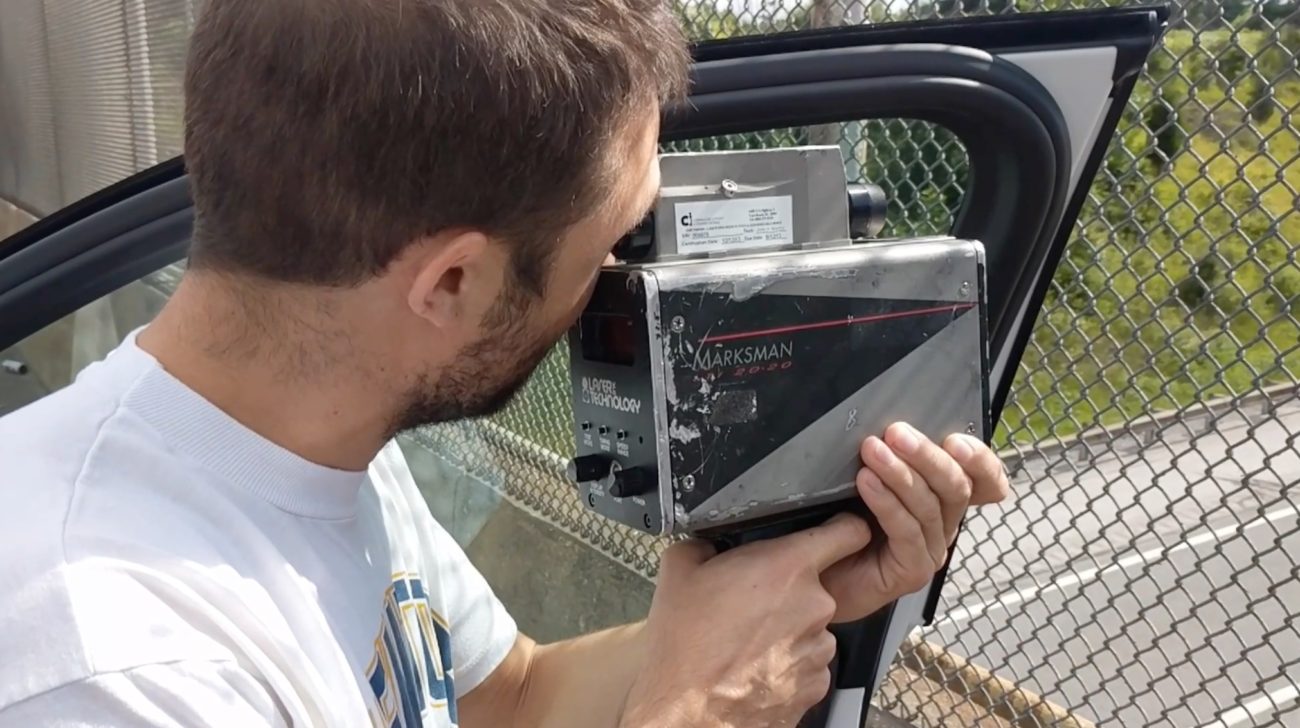 Doug, VINWIKI YouTube sensation and owner of Switchcars came out to make sure I was driving safely in Ohio 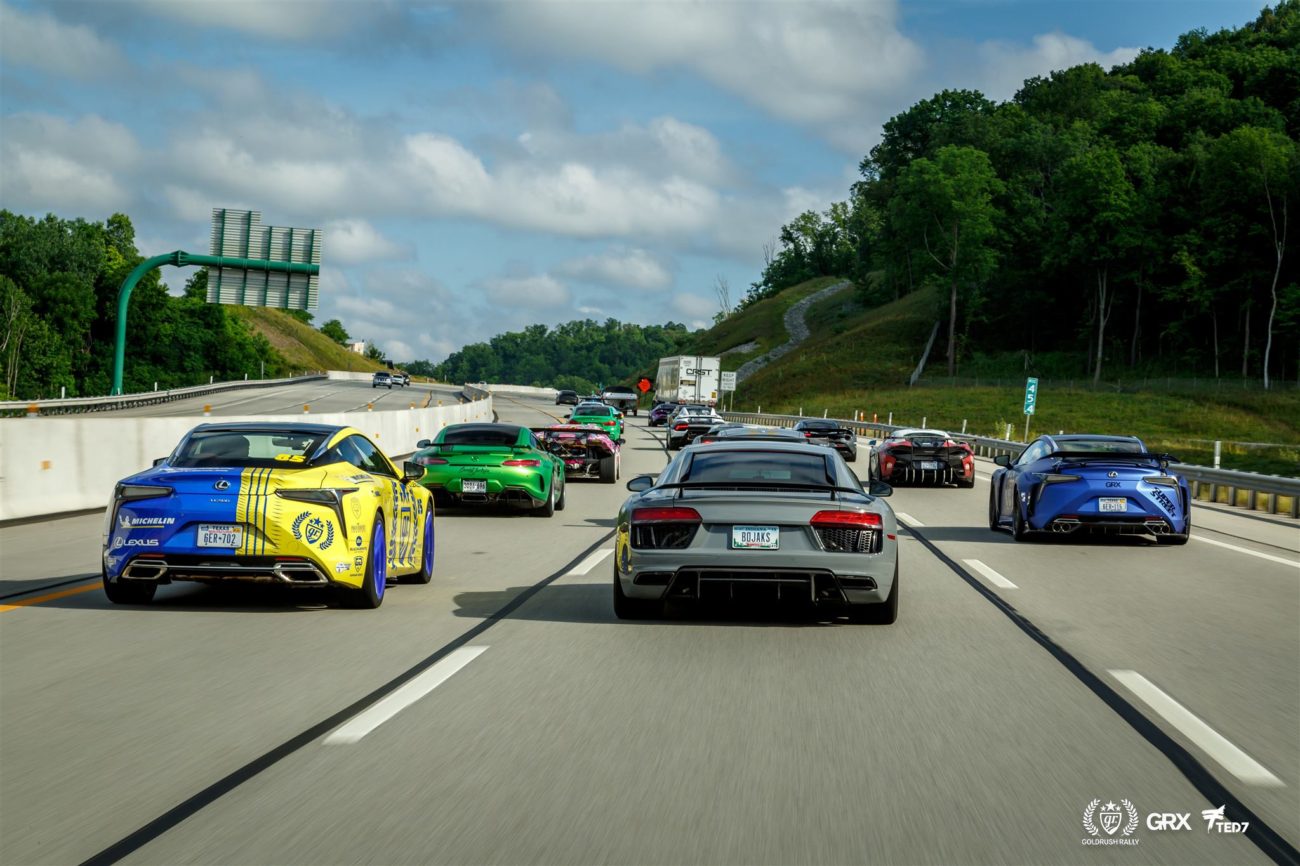 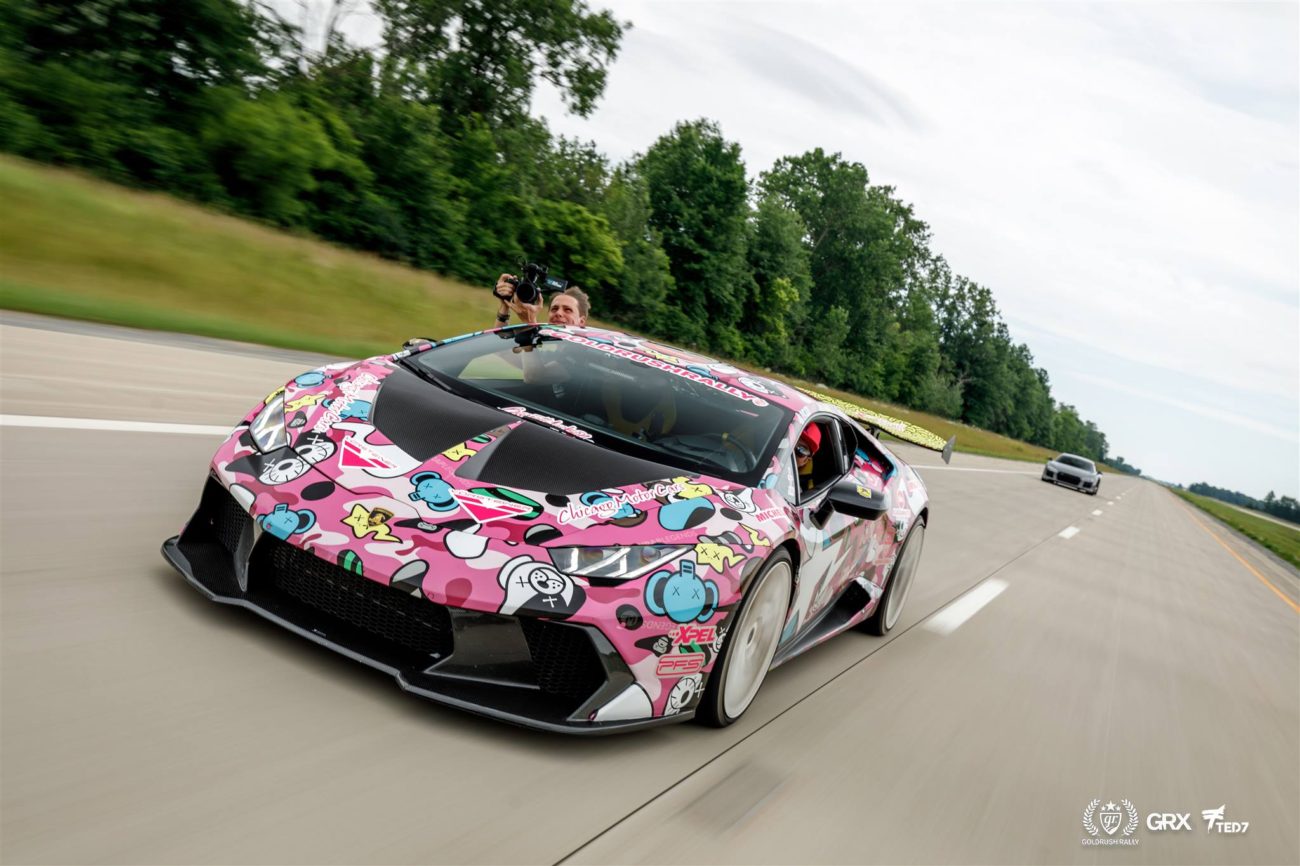 We Woke Up The Bears In Ohio

As we neared the Michigan border I started to here chatter on the Police scanner first about a orange “Corvette” which was actually Randy and Tim about 25 miles behind us in the McLaren 720s. From then on goldRush was the only topic of conversation as the Ohio Turnpike quickly turned into speed trap alley behind us. Each officer would check into a mile marker where they would call out their location. Syed diligently informed the group through the chat function of the JoinR app we were all using. In some sections they had Police every 2 miles! 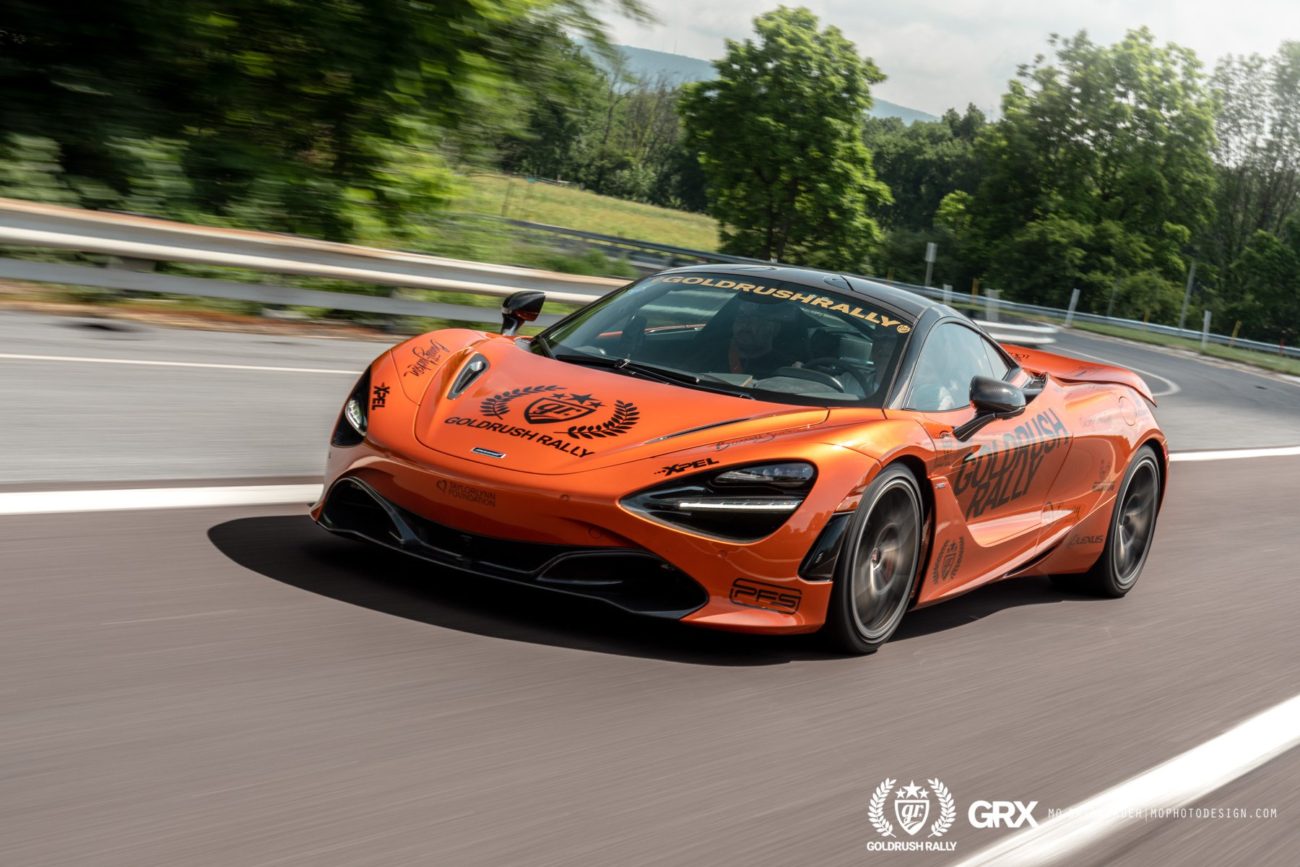 Ohio State Police most wanted. Randy and Tim in the orange “Corvette”

At M1 Concourse the set-up was amazing. Their large party ten was decked out with food and drinks. The venue had a total of 4 new Ford GT’s on hand. They had the opportunity for the goldRushers to do some lead-follow and then some open track laps before the BIG Police escorted drive to downtown Detroit. 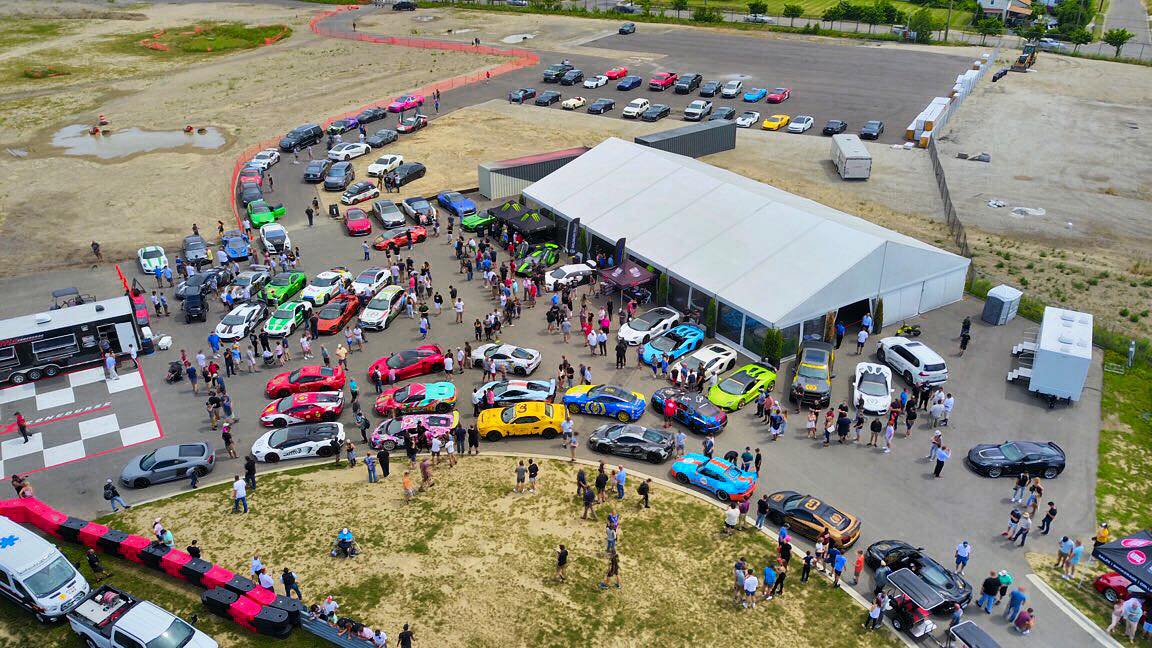 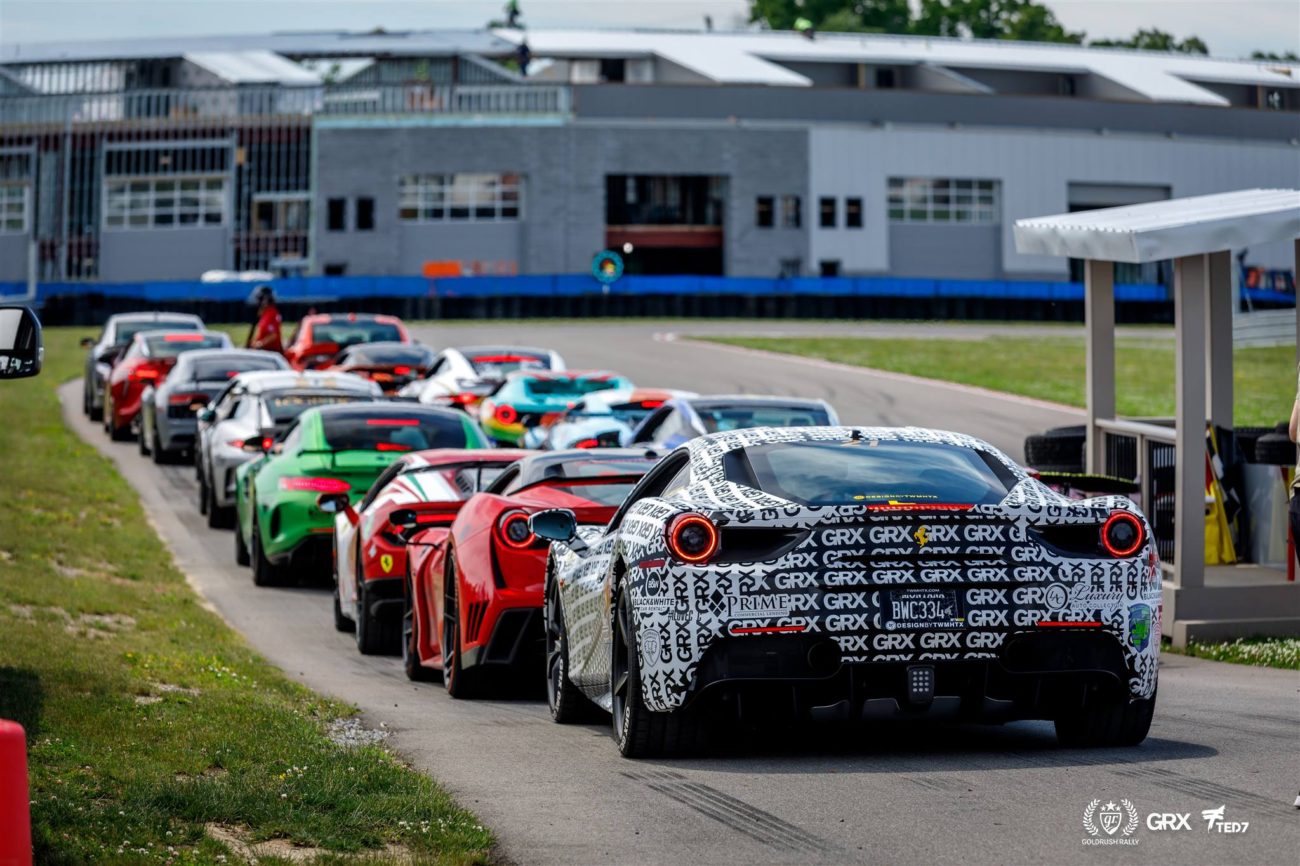 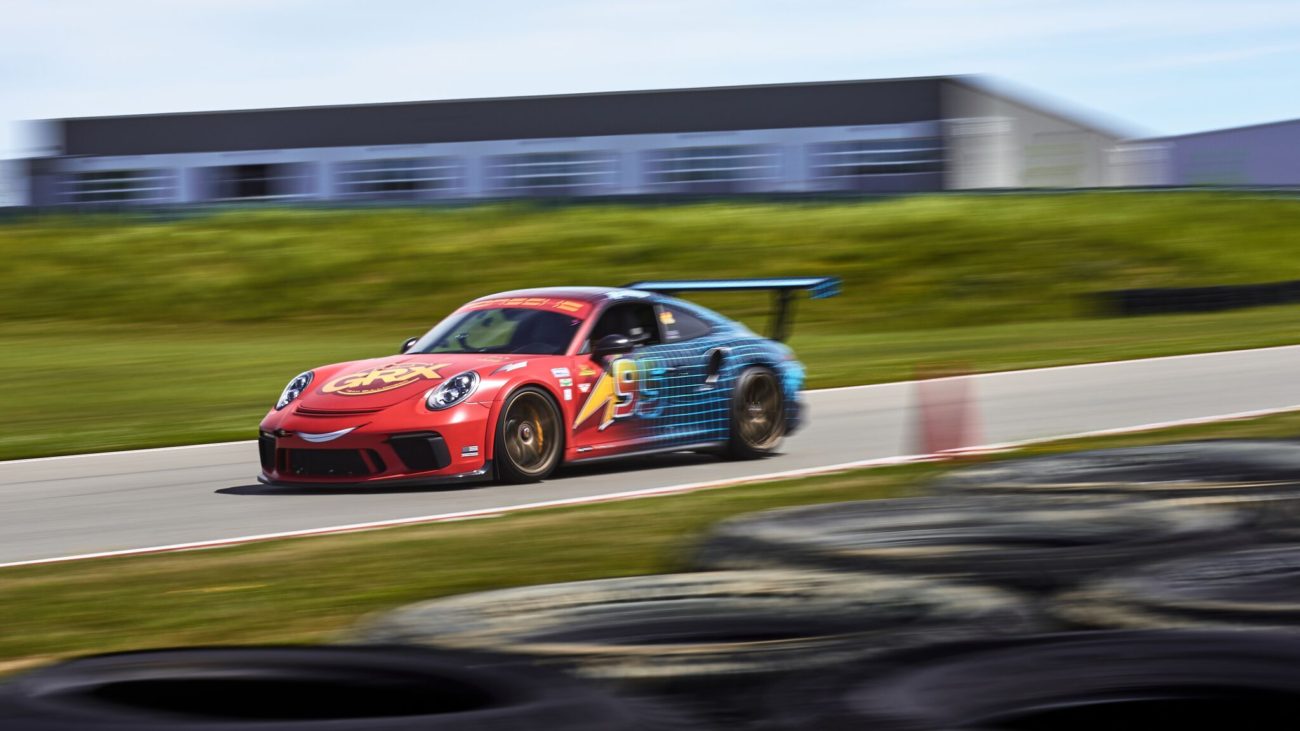 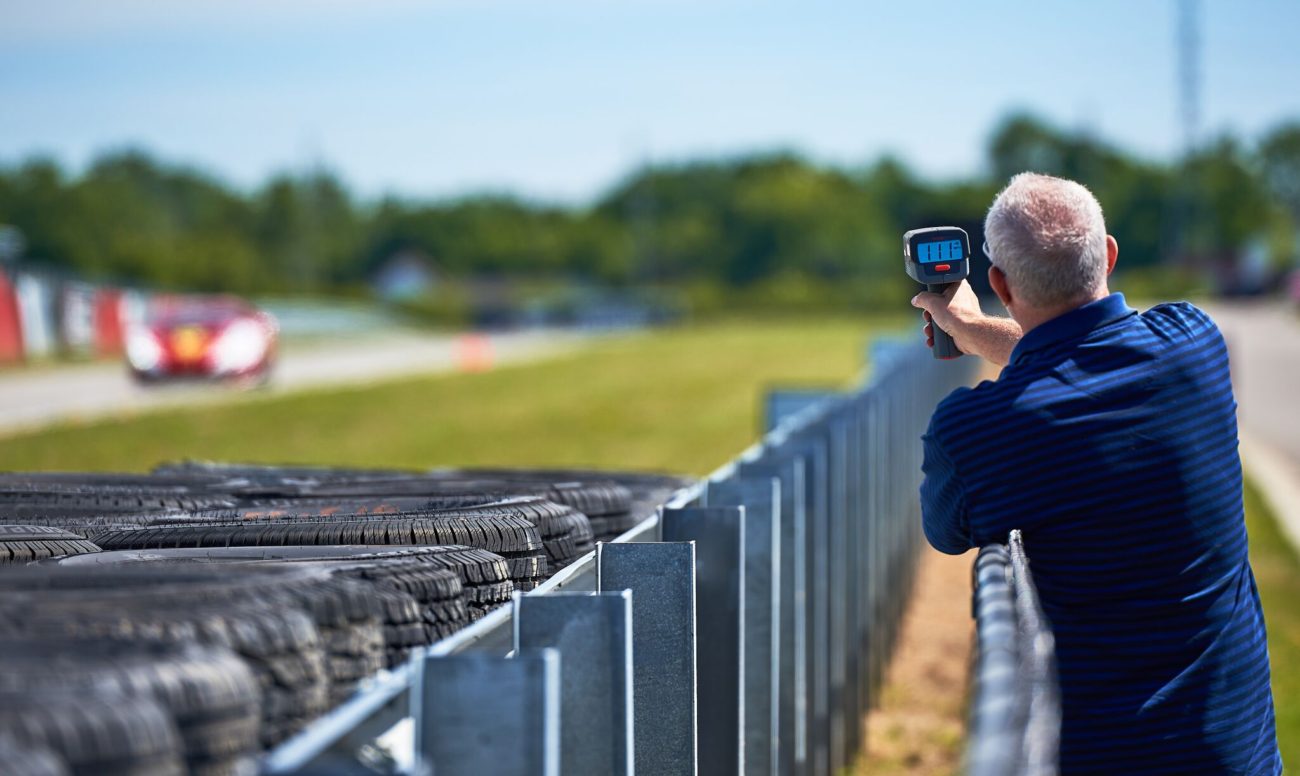 C’mon, you can do better than that! (photo – Tillman Light Drawing)

This was definitely the best part of the rally so far. Things were running behind at M1 but we had a Police Escort scheduled for 4:00pm which seemed like it would need to be delayed. With 40+ officers lined up though the show had to go on. A 25 mile escort on Detroit’s busiest night was not something that could be delayed.

It was a last minute scramble when the grand-puba Ramin told everyone we were leaving NOW and to get in the cars. Alex, the photographer for Platinum Motor Cars jumped in with me, Erica jumped in the Lamborghini Aventador SV with Syed and we raced out of M1 to catch the tail-end of the procession leaving. A quick jaunt up Woodward we then headed East to I-70 to head downtown. 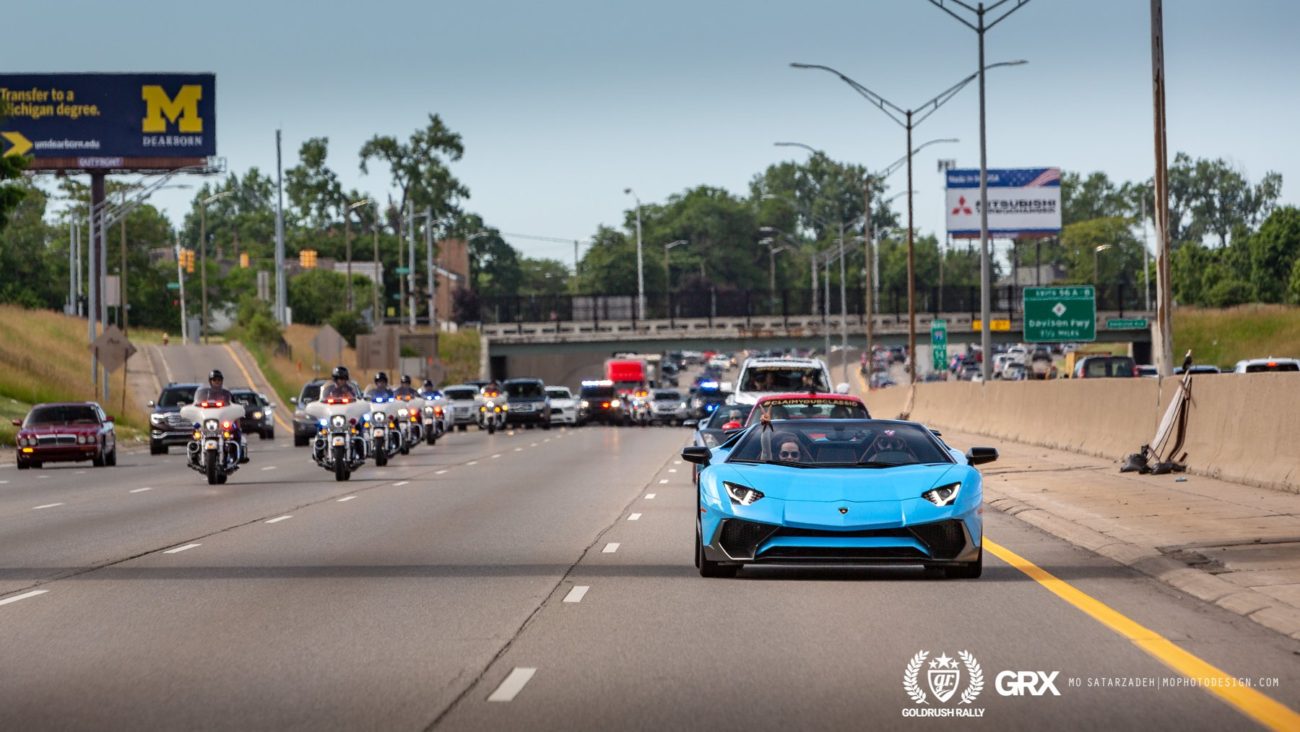 I-70 Here Comes The goldRush Rally!

Once we got on I-70 it was surreal. The Michigan State Police stopped traffic on the interstate for us! We entered the highway and shot into the left lane with a sea of probably 50 goldRush cars in front of us which looked incredible. The Officers on motorcycles worked hard to keep us all together and moving. They pushed all traffic off to the sides and out of our way. Being toward the back of the pack we all had some trouble staying close together and there were points the Police were urging us to keep a tighter formation. At one point I hit 110mph with the Police motioning me by faster. What a cool feeling! 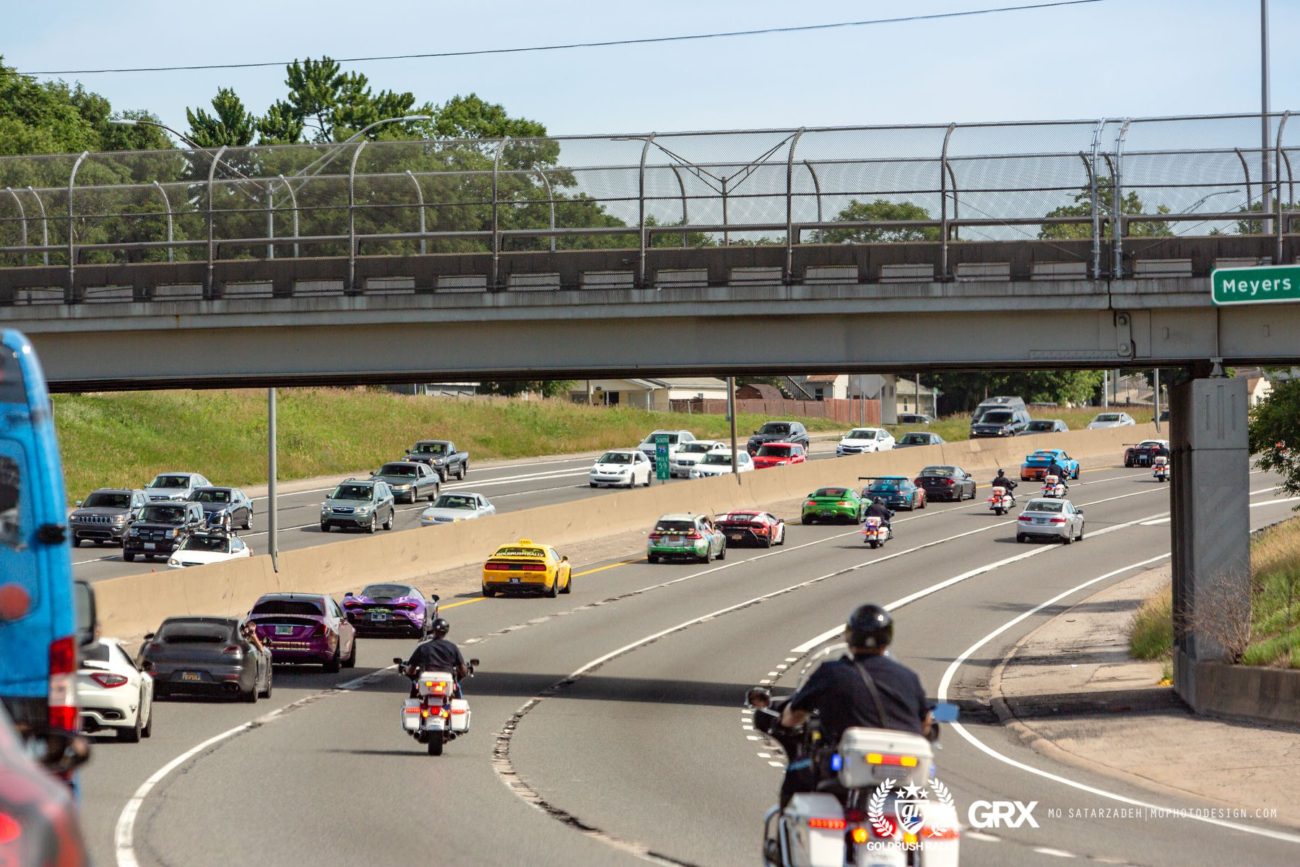 I-70 on lockdown for goldRush Rally (photo – Mo Satarzdeh) 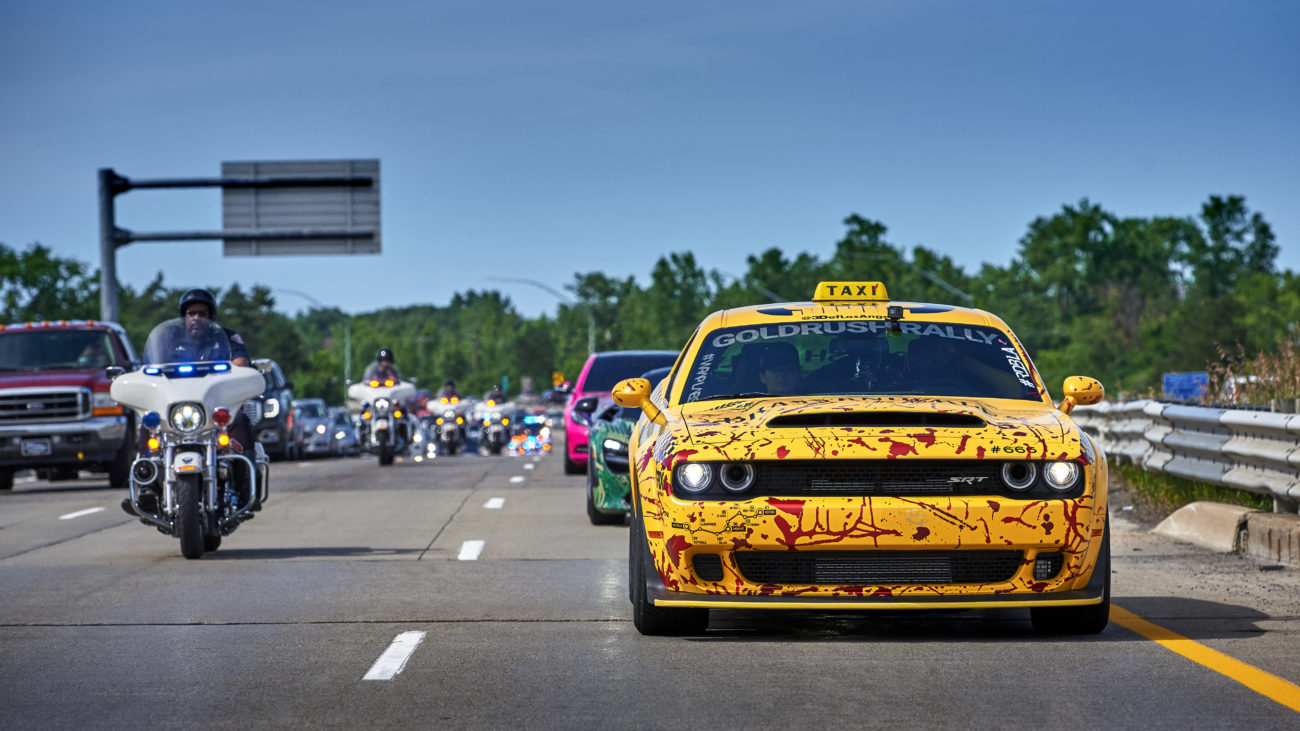 Alex was in the back seat hanging out the window to get some epic shots of the action. (photo – Tillman Light Drawing)

Once in Detroit and settled in on the rooftop of the parking garage across the street from the Greektown Hotel and Casino we headed out a few blocks away to the Townhouse for dinner. The city was a buzz with activity. It was Detroit’s busiest night with everyone in the downtown area for the city’s annual, award winning fireworks display. 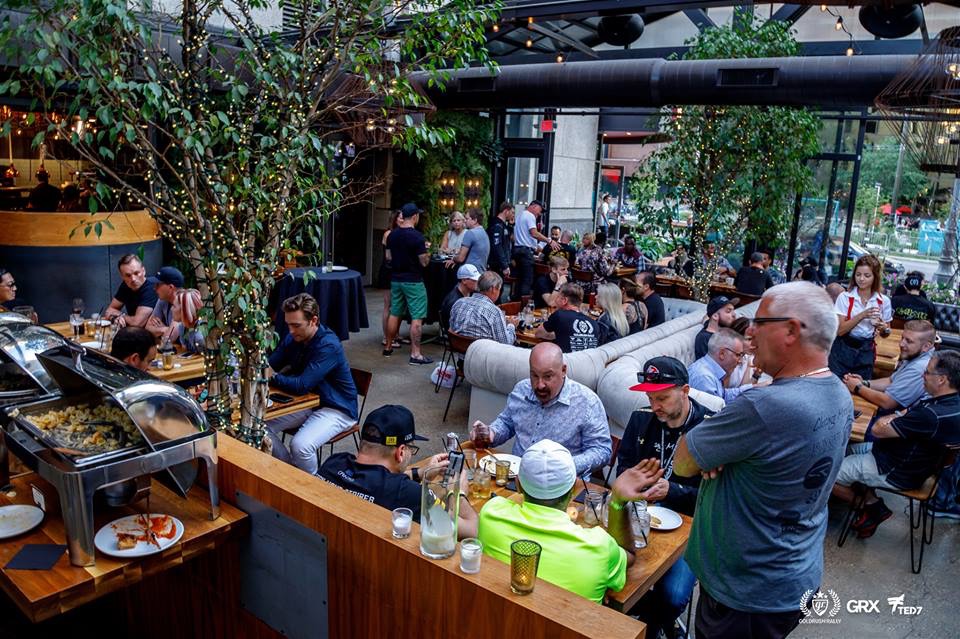 Dinner at The Townhouse in Downtown Detroit (photo – Ted 7)

Back at the parking garage, Monster Energy Drinks was setting up the roof-top party where we enjoyed a chill night watching the firework show. It was a really relaxed night and my favorite of the rally. No wild party and some huge club, just the goldRush family chilling by the cars enjoying an amazing fireworks show together. Probably my favorite night of goldRush ever. 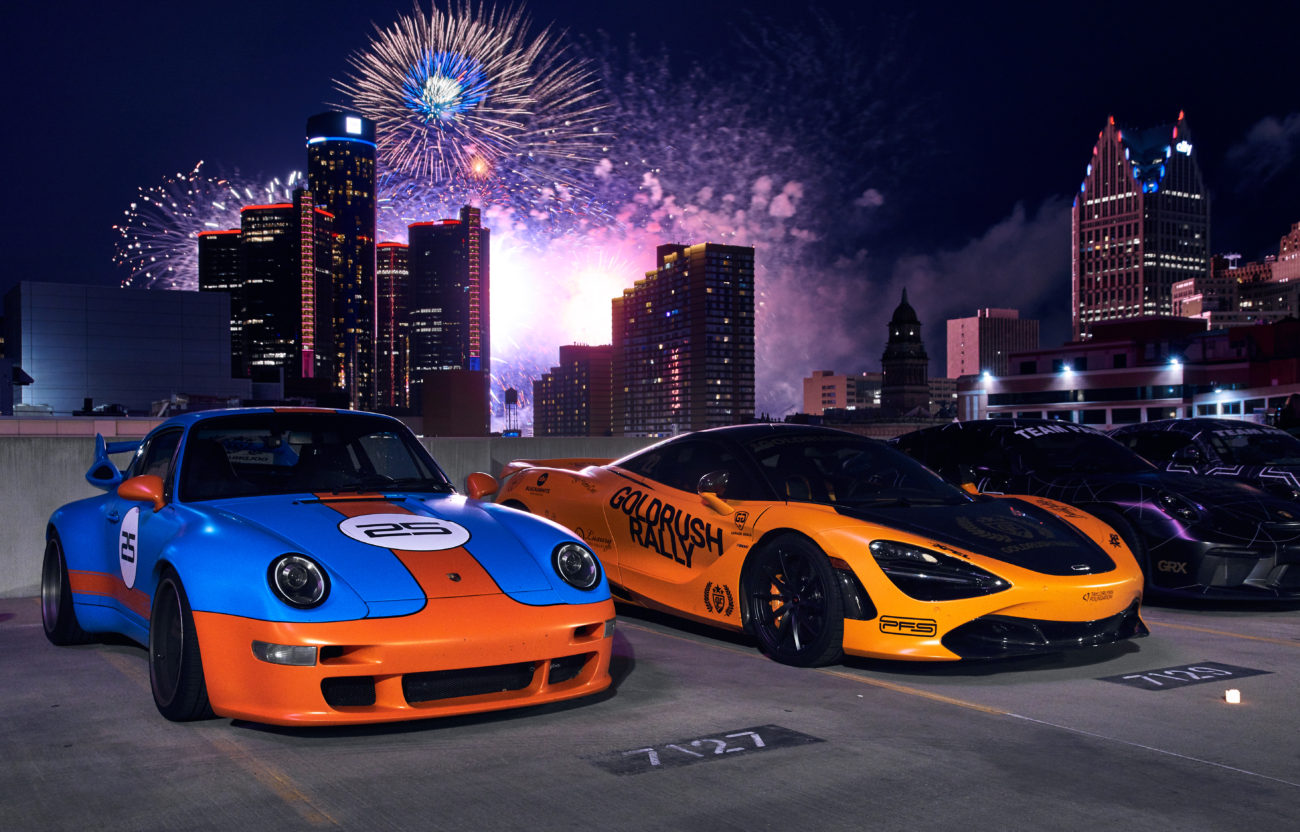 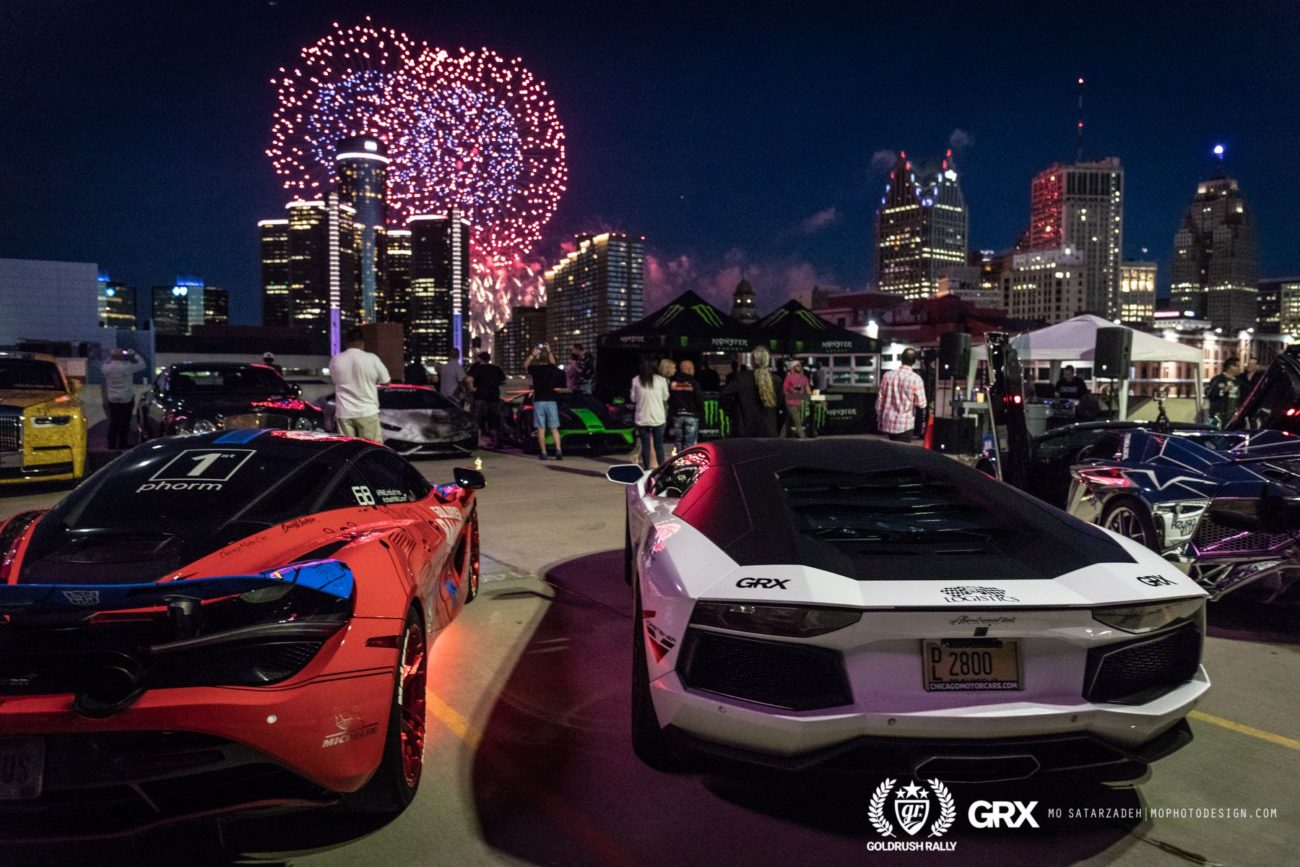