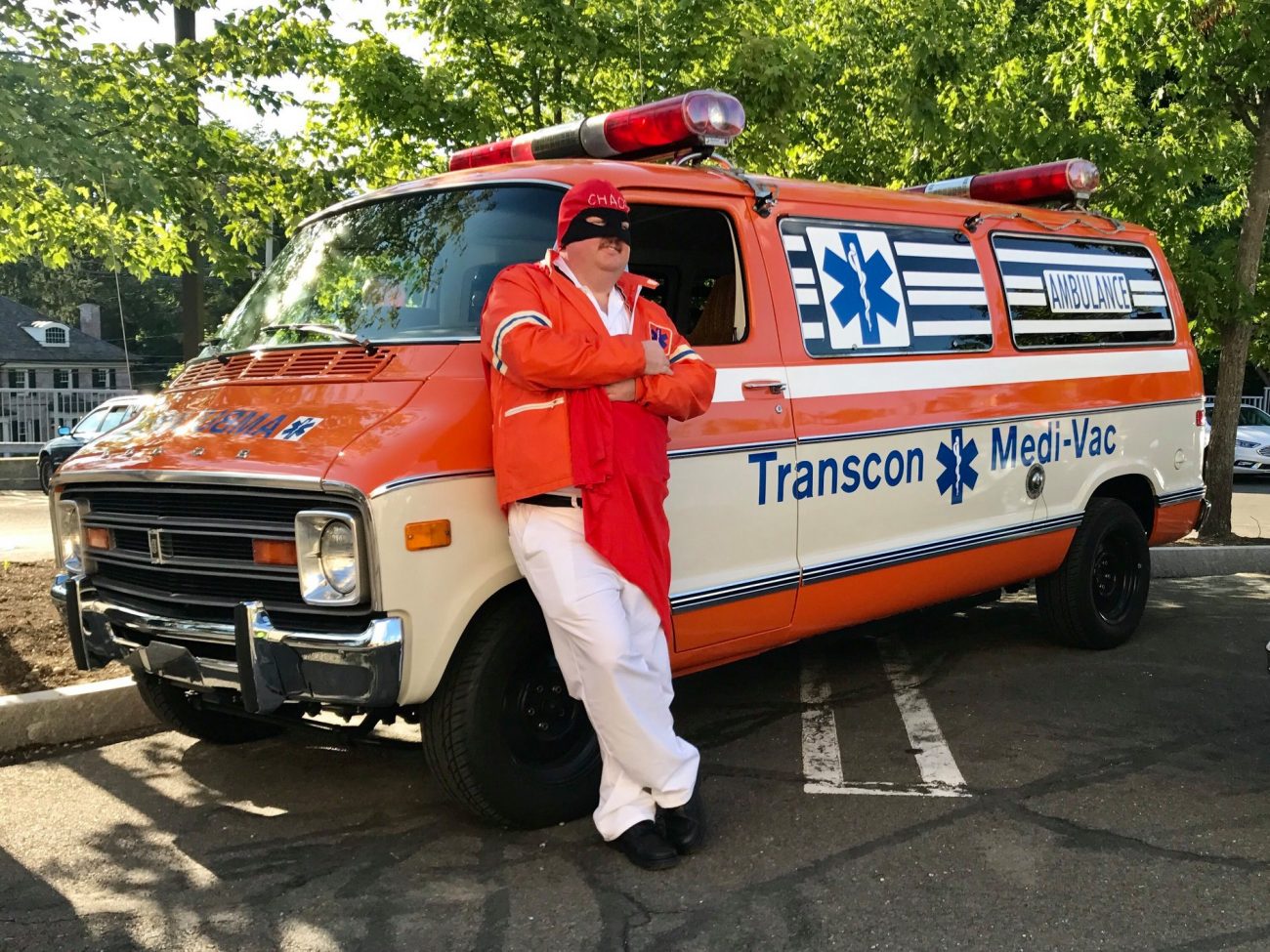 Can You Race An Ambulance Across The USA?

Enjoy this story from my good friend and owner of the most screen-accurate Transcon Medi-Vac in existence, Travis Bell.

41 years ago, today…. On April Fool’s Day of 1979, at 1:45 am, Hal Needham, Brock Yates, Lyle Royer, and Pam Yates approached the starting line in a heavily modified 1978 Dodge Sportsman Van, the Transcon Medi-Vac. The 1979 Cannonball Run would be the final Sea-To-Shining-Sea Memorial Trophy Dash. The Needham / Yates entry was the favorite to win the final running of the Cannonball. Brock Yates had started all of this madness in 1971 as a middle finger to the 55 mile per hour speed limit. Yates had previously won the Cannonball and was prepared to defend his title. Hal Needham was considered the greatest stuntman and precision drivers of all time. What could go wrong?

A few months prior, in a bar on the Sunset Strip, Hal Needham came up with the ultimate disguise to run across the country at a high rate of speed and to go undetected. As a professional stuntman, he’d been in countless Ambulances; if he had one that could do 100+ mph and carry plenty of fuel, he’d have the perfect vehicle. He called Brock Yates and said, “You’ve got to do it one more time!”

Within a week, Hal ordered a brand-new 1978 B200 Dodge Sportsman in two-tone Sunrise Orange and Spinnaker White, so they didn’t have to paint the van; it was built in these colors. The guys bought all the appropriate external ambulance fittings, installed a Dick Landy-built 502” big block between the seats, and installed an overdrive transmission. Most all of the conversion work was done by the famed Bill Mitchell at his shop in Connecticut.

To make things totally kosher, they had some medical supplies in the van, a gurney, a doctor named Lyle Royer (which Hal met in that same bar on the Sunset Strip). Brock’s wife, Pam, was the “patient” they were transporting coast-to-coast by ground, because her condition forbade her from flying. They figured if any cops stopped them; the entire story was just crazy enough to work!

The previous Cannonballs had departed from the Red Ball Garage on East 31st Street in New York City. This was the location where Car and Driver Magazine stored their test vehicles. In 1979, the starting line had been moved to Darien, Connecticut because the event had been leaked to the Press. Countless reporters staked out the Red Ball Garage awaiting the arrival of the entrants. As the hours went on, many of them realized they’d been had! Brock’s longtime friend George Lysle agreed to host the send-off from his restaurant, The Lock Stock and Barrel. George can be seen, standing next to Brock, on a dumpster behind the Restaurant, during the driver’s meeting.

As their departure time approached, the Transcon Medi-Vac had some serious mechanical problems and could barely run under its own power. Within moments of punching their time card, the Transcon Medi-Vac traveled less than 100 yards before it died. Hal’s dream of having the fastest Ambulance on Earth was fading due to an improperly set up carburetor. He jumped out of the driver’s seat with a stack of hundred dollar bills and offered them to anyone that could make this rolling experiment run correctly. As luck would have it, a couple of mechanics were there (attending the largest all-night party that Darien had ever seen). In the middle of the night, they broke into an auto parts store and retrieved the correct parts that the Ambulance needed.

The Ambulance left the starting line sideways as it tore out of the Goodwives Shopping Center parking lot into the darkness. Now that the bugs were worked out, the Transcon Medi-Vac easily hit triple digits. Leaving mile markers in its rearview, Hal noticed something else in that same rearview, another set of flashing lights. After a short chase, they were pulled over by a couple of local New Jersey Police Officers. If you’ve seen the movie, the Transcon Medi-Vac gets pulled over and the doctor explains that the patient cannot be transported by plane because of a rare lung disease. This actually happened and the dialog that Dr. Lyle Royer produced was used in the movie, almost verbatim. Even though they had passed countless exits, including one with a Hospital, reluctantly, Officers Fenech and Schmidig let them go!

The Transcon Medi-Vac made great time across Pennsylvania, Ohio, and Indiana but all was not well in the belly of the beast. The gremlins that plagued the Ambulance in Darien, got worse in Effingham, Illinois. Even though countless hours of planning had gone into the Transcon Medi-Vac, most of it was untested and the exotic overdrive transmission started to fail. The Transcon Medi-Vac stumbled across the country until he finally died in the Palm Desert at Wheel Inn Café (where the Cabazon Dinosaurs are). These are the same dinosaurs that appeared in Pee-Wee’s Big Adventure (sculpted by Claude Bell). After multiple quarts of transmission fluid, the “most feared” entry in the final Cannonball Run had been defeated. Though he didn’t finish under his own power, Hal Needham peeled off enough hundred dollar bills to have the Ambulance loaded onto a flatbed truck that happened to be at the same Truck Stop. (Side note, Hal Needham actually jumped it onto the back of the flatbed) A few hours later, the flatbed arrived at the Portofino Inn carrying the Transcon Medi-Vac. Even though the Transcon Medi-Vac made it to the finish line, the record books reflect a DNF.

Travis Bell is the owner of Celebrity Machines, a company dedicated to reproducing license plates from famous TV and Movie Cars. He is a kid at heart who has recreated and lived out fantasies such as jumping the General Lee and driving his Bluesmobile through a mall. I’m pretty sure one day we will find out we were separated at birth! – Arne