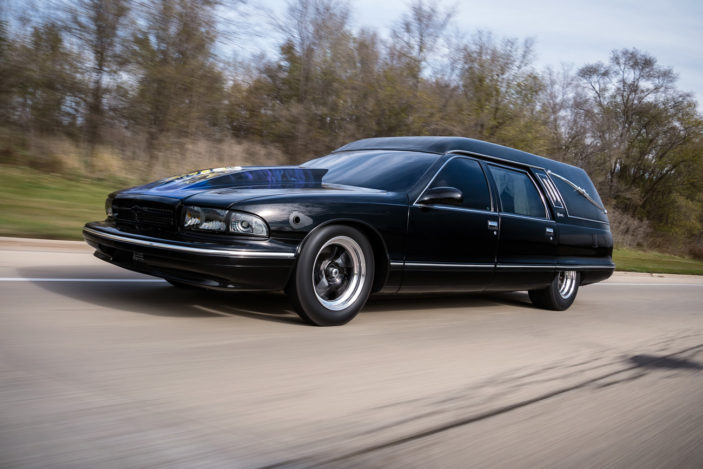 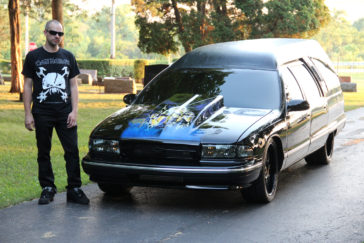 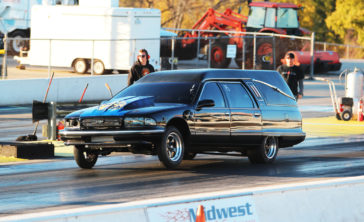 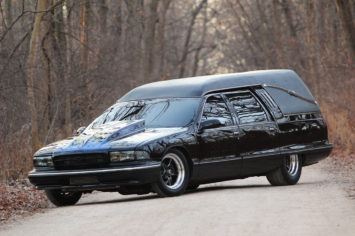 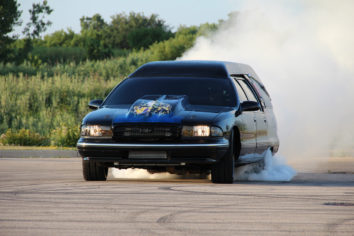 I have always dreampt of strange projects. You would think being the Vice President of AMS at the time I would have had an 1000+horse power Nissan GT-R… Instead I dream of something different, something that leaves a lasting impression.

I’ve always wanted to hold a world record that anyone could relate to.  At AMS we had broken and hed many records for particular platforms but if you are not in to that car it really doesn’t mean that much.  I was looking to hold a record you could tell your Mom about and she would understand it.  One day it hit me, build the world’s fastest Hearse.

When I looked into who had the world’s fastest Hearse back in 2008 I was pretty surprised that the record was only a 13.72 @ 98 mph. This was recorded by the Guinness Book of World Records in 2005 by a Hearse named “Undead” from Australia. I thought, boy I could crush that!  And the search for a Hearse began.

I did not want the standard old Cadillac Hearse. I wanted something that looked “sporty” so I chose the late model Chevy Caprice or Buick Roadmaster to look for. It had to be black with a red interior because to me that is the classic Hearse look. It actually took over a year to find the one I wanted, apparently it is difficult to find the black/red color combination. What I eventually found was a 1996 Chevy Caprice converted by Superior Coaches. It was from Knoxville Tennessee so it was rust free… perfect.

From the beginning I knew I was going to make this a tribute to my favorite Metal Band, Iron Maiden.  Since I was 8 years old back in 1983 they have been my favorite band and I always incorporate some sort of Maiden livery on all of my cars.  This project however was going to be a tribute to those Metal Gods.  I named the car “Madness” after one of my favorite Maiden songs, “Can I Play With Madness”.

The first thing I did to the Hearse was add an Impala SS grill and 4″ cowl induction hood. My Ese, “El Mago”, over at HQ Kustoms air brushed a sick Iron Maiden mural on the hood. He said I was officially the first Gringo he knows to have a mural on his hood. I was honored. LOL.  While I made plans for the Hearse I pimped it around on some chessey 20″ rims and the anemic LT-1 for a few months.

The plan was not to build some gutted out race Hearse.  I made it a requirement to keep it a street car and fully functioning Hearse.  This includes a stereo, air conditioning and most importantly the rear deck and rollers for a casket.  In fact the Hearse now weighs an additional 350lbs more than it did when we started due to the turbo, intercooler, roll bar and so on.  The other criteria was I did not want to run the car in just the quarter mile.  It had to be capable of running a half and full standing mile to really make sure it was the fastest Hearse on the planet.  I did not want to build a one trick pony!

The first thought I had was to use a Duramax diesel to power my Hearse. Technology has come a long way since the 7.3 Powerstroke I modded to power our old, 13 second, 1999 Ford Van tow vehicle. I figured the torque of a diesel would be good to get this monster rolling.

After buying a used Duramax diesel off eBay I began to realize that an engine this heavy would really limit what I could do with the Hearse. Weighing in at 840 lbs. this engine would not allow me to road race the Hearse limiting me to straight line racing only (don’t laugh, I do plan on taking it on a road course someday).  After discussing my dilemma with my business partner, Martin, he suggested that a LS based Chevy V-8 with a turbo should do the trick and would allow me to have a more versatile Hearse. 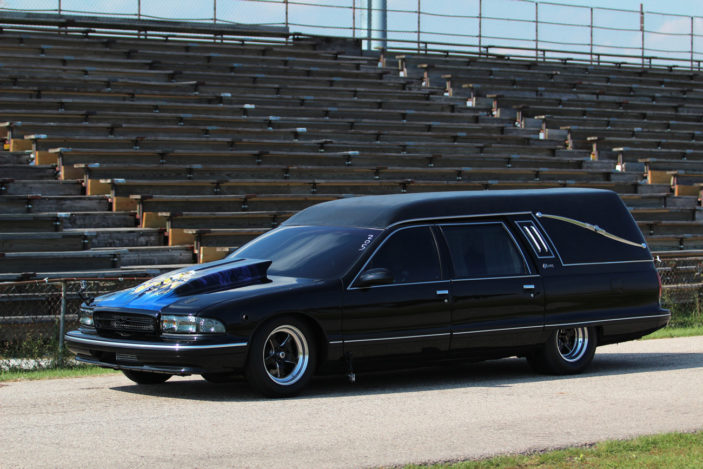 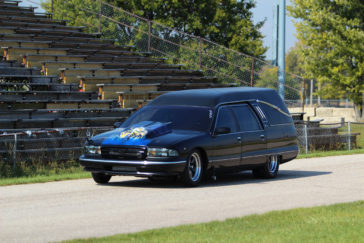 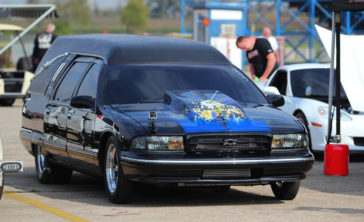 With a new plan in place I sourced an LQ4 6.0 Chevy V-8 complete with 4L85e transmission and wire harness from a 2006 Chevy Van. This seems like a much better choice and far less expensive than my original idea. I kept it simple just adding new metal head gaskets, headstuds and a cam and valve springs to the stock engine.

Only a couple months after I began this project a new contender, “Stiff Shifter”  , from Transylvania smashed the record with an 11.6 in March of 2010.  I began to worry that it would be difficult to beat this new record.

This project took longer than expected because we would only pick away at it in our downtime.  Shane Smith, the lead fabricator on the project, spent his spare time sorting out the turbo and intercooler system and other aspects of fabrication for the project.

In 2011 when LS engine experts Larry Hamilton and Lance Cain joined the AMS team is when things really started to take shape.  Progress was still slow because their great ideas and attention to detail added to the complexity of the car as they saw new ways to make the car even more unique than the typical LS turbo swap.  We were still doing things in our downtime but that gave us time to really ponder how we were going to put it all together.

In the end, the Hearse has exceeded every expectation I had.  The car has performed flawlessly on every outing.  I actually broke the world record with an 11.5 @ 117mph on pump gas on the cars maiden (pun intended) voyage to the track in late 2012 simply doing initial shakedowns.  On our second outing with an E98/Shell URT blend tune, Chris Black, the lead Calibrator at AMS, crept up on the tune up allowing us to shatter our own record to a new best of 10.7 @ 127 off the foot brake.

Being the car ran flawlessly on the first two outings we wanted more as any hotrod guy would. Over the winter we put together some ideas and consulted with our friends at Speed Inc for a custom grind cam, FTI for a converter, Jose @ Forced Inductions for a Turbo and Andy’s Performance Trans for a built 4L80 with brake. The end result was 730whp on our Mustang Dyno @ 20psi (900~ at the crank).  This new combo was what took the 5200 # Hearse into the 9’s@137 MPH with a  1.47 60′ off the trans brake yanking the front wheels 6″ off the ground in the process.

Although some may say we are running the car on the ragged edge (we probably were hahahaha) it never skipped a beat.  Chris had it dialed in at around 1000hp on 23psi of boost for its 9 second pass after careful monitoring of the tune.  This combo also propelled the Hearse to 161mph in a standing half mile at *only* 20 psi (it’s just a stock motor you know, got to play it safe).  Seriously though, this whole project is a true testament to careful planning, execution and tuning by my team.  I never dreamed my Hearse could be this fast on a stock motor and has done all of this without any hiccups or problems.

I was worried my Hearse would have a hard time breaking out of the 11’s and I NEVER thought it would pull the tires on the launch. I am so happy with the outcome of this project.  It is completely streetable and can be driven anywhere comfortably with the A/C on and is really quiet through the mufflers yet pulls the tires on its way to a 9 second pass and easily hit over 160mph in the half mile all with room for improvement.

From there I teamed up with Garrett Turbos on a quest to push the car deeper into the 9’s. With an AES built mild forged 370ci package , a 15″ drag radial and a pair of the new Garrett GTW turbos we managed a 9.54 @ 147mph on the first test outing on a soft launch and with power left on the table!